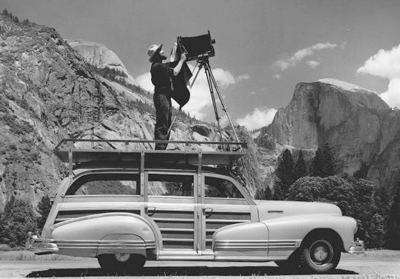 Emphasizing the importance of the piece by the two Brubecks, the entire concert bore the title, Ansel Adams: America. Renowned jazz composer and pianist Dave Brubeck, who studied with French composer Darius Milhaud at California’s Mills College in the late 1940s, always had a dual interest in classical music and jazz improvisation.

Ansel Adams: America started out as a Dave Brubeck piano solo conceived in collaboration with his son Chris, who then transcribed the piece for full orchestra. The performance included the projection of Adams’ photos on a screen above the performers. It begins with a slow introduction dominated by the brass choir and supported by the strings. The Orchestra’s performance was attractive and ingratiating, and conductor Randall Fleischer maintained excellent continuity throughout.

Since Adams was himself an accomplished classical pianist who especially loved Bach and Chopin, the two Brubecks decided to incorporate an active piano part into the piece that referenced textures related to the two great composers. The frolicking mood of the first piano solo associated itself with family pictures of children and seemed akin to Chopin’s light pianistic style. Subsequently, the stepwise treatment of the theme associated itself with pictures of waterfalls that also seemed to descend in steps.

The pictures of the huge El Capitan range and related mountain views feature low brass, and later, pictures of powerful waterfalls are accompanied by the piquant sounds of slapstick and tam-tam. Sostenuto brass choir return to support photos of foggy landscapes. Full but soft strings accompany the subsequent autumnal views. While the medium of black and white images was surely a challenge to the two composers, the use of quasi-monochromatic orchestral choirs often helped ally the music to the photographs.

The section that featured southwest Native American pictures featured appropriately expansive musical accompaniment. When the visual images transition to summer scenes of blooming flowers and aspen groves, the busier piano textures return. The closing photos are associated with late afternoon or early evening moonscapes with slight daylight, here accompanied by powerful brasses. Though the music enjoyed its own mood and style, one could not help but think of parts of Ferde Grofe’s Grand Canyon Suite.

Ludwig van Beethoven’s landmark Symphony No. 3 in E Flat Major, Op. 55 “Eroica” made up the entire second half of the program. Unlike any symphony before it, because of its sheer sixty-minute length and wealth of ideas, the “Eroica” represented an unprecedented and magnificent musical structure, marking a new era in symphonic writing.

In this performance the first movement initially seemed to lack energy and focus, but lovely woodwind solos and novel horn dissonances helped rescue its opening. Once the big exposition climax took place, the music flowed better and the development was excellent. Fleischer made sure that the fugato was also effective.

Perhaps these problems might have been avoided by starting the concert with the Eroica and saving the Brubeck’s piece for the second half — the visuals would have made the performance equally impactful later in the program. Notwithstanding, the second movement funeral march was excellent, building beautifully to a climactic tutti, and featuring attractive oboe solos. As usual, timpanist Robert Barnett was spot on throughout.

In the Scherzo, wonderful paired horns in the second theme contrasted dramatically with the rhythmic intricacies of the first theme. The finale — in the form of theme and variations with another lively fugue — contains a wealth of ideas and was performed with a wonderful variety of tempi and dynamics. The horns were again outstanding, and the piece rushed to a stirring conclusion.

Mozart’s Magic Flute Overture offered an exciting prelude to this grand concert. Though marred by a few ensemble glitches and dynamic problems at the beginning, the Orchestra’s reading of the Allegro was highly compelling in its intricate counterpoint.

END_OF_DOCUMENT_TOKEN_TO_BE_REPLACED

Concerts cancelled in 2020 may have put a brief gap in Ling’s record with the Orchestra (a program every season since 1984-1985), but the ensemble’s former resident conductor more than made up for it Sunday with a performance both commanding and personal. END_OF_DOCUMENT_TOKEN_TO_BE_REPLACED