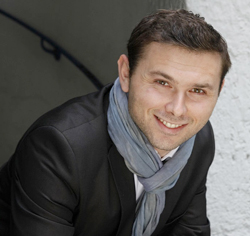 Listening to a concert is like hugging: you can tell when someone is into it and when they aren’t. A performer might revel in a slow movement or delight in a fast one — or every now and then they might just go through the motions. Both ways of playing were on display Wednesday night, January 21 in Oberlin’s Kulas Recital Hall. As part of the school’s Chamber Music Intensive & Festival, Russian pianist Misha Namirovsky performed chamber works by Beethoven and Shostakovich with Oberlin faculty members, followed by Schubert’s Piano Sonata in c, D. 958.

Namirovsky’s Schubert started and ended brilliantly. The first movement’s opening chords and runs were athletic in power and grace — solid yet effortless. The last movement seemed his specialty, full of restless, nervous energy. But in between, his playing sounded muddy at times and lacked nuance in dynamics. The second movement felt cumbersome.

In the opening to Shostakovich’s Sonata for viola and piano, op. 147, you expect gentleness, the viola leading with light pizzicato, the piano offering a shadowy response. The pairing of Namirovsky and Michael Strauss, faculty violist and co-chair of the festival, took it to another level. Just picture that telltale omen of a curtain blowing gently in the wind: something spooky awaits. That was Strauss’s and Namirovsky’s opening, their sounds translucent and eerie to the max.

You only wished more of that whispery intensity had carried through to the rest of the performance. Strauss shone with his trademark vigor, the intensely psychological Shostakovich coming through pale and vengeful, like a clenched fist. But between those gripping highlights, the players too often stayed in a neutral middle ground.

In Beethoven’s 7 Variations on “Bei Männern, welche Liebe fühlen” for cello and piano, Namirovsky was smooth and precise, his upward runs like little waterfalls in reverse. Faculty cellist Amir Eldan was the star in the slow movement, his melody flowing beautifully, spiced with dynamic contrast. He might have employed more wit and mischief in the giddy final variation, which played more to Namirovsky’s strong suit of dashing playfulness.

Those same strengths carried through to the end of the concert. Namirovsky’s flying Schubert finale earned him an enthusiastic standing ovation and a remark of “get this man a drink” from the person next to me. A Rachmaninoff encore, Prelude No. 5 in G, op. 32, followed as parting gift.

Jackson began the program with a recitation of Langston Hughes’ poem “Helen Keller” — the first of five poems by Hughes that served as interludes between each piece on the first half. END_OF_DOCUMENT_TOKEN_TO_BE_REPLACED

Pianos with pins and tape on strings, a bass drum and tam tam, crotales, Almglocken, and vibes. Microphones were hooked up all around the instruments. The feed was sent to speakers around the room. Lighting designer Nicholas Houfek hung incandescent globes over the arrangement of instruments from thin black wires stretching across the beams. END_OF_DOCUMENT_TOKEN_TO_BE_REPLACED

From the podium, Elim Chan set an ambitious tone for the evening. The rising star conductor, here in her Cleveland Orchestra debut, has a commanding style, and every twist and turn in Saturday’s performance tracked closely with her baton. END_OF_DOCUMENT_TOKEN_TO_BE_REPLACED