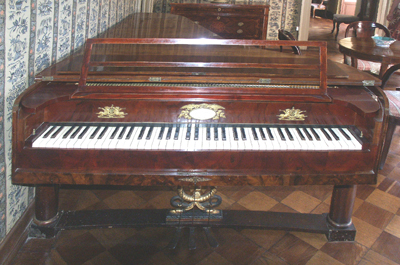 When Oberlin faculty violinist Marilyn McDonald and pianist David Breitman play Beethoven sonatas in the Conservatory’s Kulas Recital Hall on Saturday, September 13 at 4:30 pm, they’ll be joined by the latest addition to Oberlin’s impressive collection of historic keyboard instruments. An Anton Zierer fortepiano built in Vienna in 1829 came to live in Oberlin last summer and has kept Robert Murphy, the conservatory’s curator of fortepianos, busy getting it settled into a new environment.

Murphy began working with his mentor, 1963 Oberlin graduate Edward Swenson, in his Trumansburg, NY restoration shop when he was 14, and has logged “close to a hundred” historical restorations or work on historical replicas. “At any one time,” Murphy recalled, “Swenson might have had a Graf fortepiano next to a Steinway next to a Baldwin upright, with a virginal off in the corner, and he was working on all of them at the same time.”

Sometimes benign neglect works in the favor of technicians who are charged with restoring historic instruments. In the case of the Zierer, the piano sat in the music room of a an unheated summer house on Italy’s Lake Como for 170 years, having been shipped by boat, then dragged up a steep, cobbled path to the hillside villa on a mule-drawn cart in October, 1841. The piano seems not to have been played much at all during that period. When an artist and art historian bought the house in 1935, the piano underwent a partial restoration, only to continue to remain silent.

The owner’s daughter dreamed of establishing an artists’ colony or fellowship institute in the villa, but her vision was quashed when the house was sold in 2011. The instrument was shipped to the restoration workshop of Edwin Beunk in Enschede, the Netherlands, and thence in 2012 to the daughter’s house in New York, where it proved to be too large for the elevator in her West End apartment. Unable to find the instrument a suitable home nearby, she negotiated its relocation to the Oberlin Conservatory.

Fortepianos, the predecessors of the modern piano, came into being around 1700 when the search for greater expressiveness in keyboard instruments led to a synthesis of the clavichord (where strings were struck by T-shaped metal “tangents”) and harpsichord (where strings were plucked by “plectra,” usually made from bird quills). The early fortepianos developed by Bartolomeo Cristofori had thin wooden cases like harpsichords but pairs of strings were struck by leather-covered hammers, allowing the player to control attack and volume.

During the next century, fortepianos increased in range from four to six octaves, actions were refined and cases strengthened. By the fourth decade of the nineteenth century, metal plates and other industrial innovations ushered in the era of the modern piano and marked the demise of the fortepiano. The earlier instrument made a comeback with the historical performance movement, which sought to match instruments to the music that was written for them.

Now Oberlin maintains a fleet of historic pianos including two replicas of five-octave instruments appropriate for the Mozart era, and three originals — a Broadwood of 1803, an Érard of 1865 that pre-dates the era of cast-iron plates, and the 1829 Zierer.

The lightness of touch of the fortepiano makes it ideal for the music of Haydn, Mozart and Beethoven. As Murphy notes, keys on the fortepiano travel a shorter distance from their resting position to the point where the hammers strike the strings. It takes about 50 grams of finger force to depress the key on a modern piano but only about 40 grams in the case of the Zierer.

The Zierer, which dates from 1829 — two years after Beethoven’s death — comes from an era when over thirty piano makers were active in Vienna. Murphy noted in a telephone conversation that the instrument arrived in Oberlin “in good restoration shape, with most of its original parts, but its action needed to be groomed up to concert conditions, and carefully tuned and regulated”— a process that needs to be repeated over and over again. “Servicing it is like trying to hit a moving target,” he said.

Bowing to a contemporary fad for Turkish music, the instrument originally featured a “drum” pedal that struck the soundboard from underneath, but that was disconnected sometime before the instrument left Italy. A “moderator” pedal replaces an original pair of pedals that deployed two strips of felt between hammers and strings — like the tone-quieting “practice piano” feature in some twentieth-century upright pianos.

Murphy was excited to work on the Zierer’s Viennese action, a system in which the hammers face the player. Because there is no metal in the instrument except for some spacers, “it really is like a huge harpsichord. It has a warm, clear sound,” he said. “The treble is particularly clear and open, which is not always the case on these instruments. It will even out over time as the new layer of leather is played in, and as I get time to go over each individual hammer, spacing and regulating it uniquely to its set of strings. That’s a grooming regulation that can take a number of weeks.” 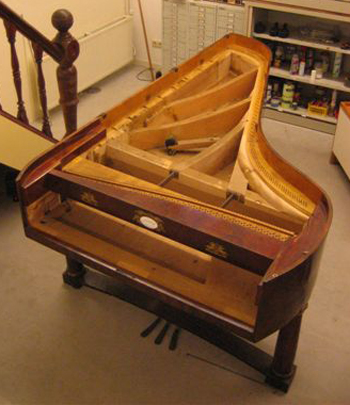 The Zierer under restoration in Edwin Beunk’s workshop.

Fortepiano professor David Breitman had a large role in bringing the piano to Oberlin. When I reached him for his comments, he was watching Robert Murphy leveling the keys on the Zierer instrument. “We play on copies because we don’t have the original instruments,” he said. “Most of those are in museums, and museums don’t want to destroy the historical condition they’re in, and as a result, they’re not very satisfying to play. It’s best when an instrument has been in the private hands of those who believe that its role is to be played. There are very, very few originals in this kind of condition, but it wouldn’t do us any good to have the Zierer if we didn’t have Robert here to take care of it.”

Breitman, who has only been in contact with the instrument for a week or so, looks forward to developing a long-term relationship with the “new” piano. “I’ve been playing fortepianos for thirty years but I’ve never had an original instrument I could see every day. This is the beginning of a new adventure for me, and the recital on Saturday is a race to the finish. I don’t yet know what it’s going to be like in a concert hall.”

He adds that because things were moving so quickly in Beethoven’s time, even an 1829 instrument isn’t completely appropriate for works written in 1803 and 1812, respectively. “Using two different pianos for those pieces would be patently ridiculous and Beethoven would never have done such a thing. But there’s no question that the 1812 sonata seems like a better match for the Zierer.”

END_OF_DOCUMENT_TOKEN_TO_BE_REPLACED

What was that strange din coming over the live feed from Ludwig Recital Hall on Friday evening, July 23, as the Miami String Quartet filed onstage to play the third faculty recital of the Kent Blossom Music Festival? Accustomed as we were during the pandemic ban on live audiences to hearing the sound of no hands clapping, it was both startling and thrilling to witness a large crowd putting their hands together to welcome one of the Festival’s perennial favorites back for an in-person performance. END_OF_DOCUMENT_TOKEN_TO_BE_REPLACED

Practical reasons aside, there aren’t many ensembles who can put together an all-Mozart evening as elegantly as The Cleveland Orchestra. END_OF_DOCUMENT_TOKEN_TO_BE_REPLACED