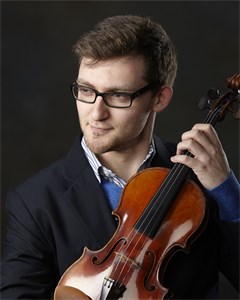 Among the special features of the Canton Symphony’s February 14 Valentine’s Day-themed concert at Umstattd Performing Arts Hall was the return of Canton native son, violinist William Shaub. He began his violin studies at age 3, became a member of the Canton Symphony Orchestra at 16, studied further as a scholarship student at the Cleveland Institute of Music, and is currently a scholarship student at Julliard. Through it all he has been steadily building an impressive track record as a soloist throughout the United States.

On this occasion he regaled us with what could appropriately be called impassioned love notes of the highest order. Based on his thrilling performances of Fritz Kreisler’s Praeludium and Allegro, and Pablo de Sarasate’s Zigeunerweisen (Gypsy Airs), I hope it’s only a matter of time, the shorter the better, before the rest of the world is blessed by his giftedness.

Shaub plays a violin made in 1865 (by Jean-Baptiste Vuilliame), and in hearing its unusual depth and warmth, there was an uncanny sensation that he was drawing out and communing with all the music that has ever imprinted itself on its mellowed grains. His unquestionable virtuosity was especially bedazzling in his effortless and witty grasp of the brisk, challenging Sarasate work. As if to deftly cool a musical wildfire that left the audience in slack-jawed amazement, Shaub’s encore performance of Kreisler’s Liebesleid was nonetheless an exciting and flawless rendering of the work’s lilting, bittersweet portrayal of heartbreak over love lost.

The sheer passion evident in that encore was a fitting mood-setter for the orchestra’s performance of Tchaikovsky’s Romeo and Juliet Overture Fantasy. Here was the CSO at its most commanding and emotionally articulate. From the rapturous soaring of the music’s famous love theme, and through to the thunderous, anguished lament over the society unsympathetic to the story’s ill-fated lovers, the ensemble delivered not just breathtaking music, but a gripping event.

The remainder of the program — consisting of Georges Bizet’s Carmen Suite and Arturo Márquez’s Danzón No.2  — was equally eventful. Members of the Canton Youth Symphony Advanced Orchestra, 42-strong, played side-by-side with the CSO ensemble. The resulting sound was understandably large, stirring, and more importantly, seamless. This was certainly a delightful testament to the high caliber of playing by these youthful artists-in-training, under the direction of Rachel L. Waddell. She’s both the CSO Associate Director and Music Director of the Youth Symphony. Here she conducted the Carmen Suite, delivering a crisp and spirited reading that clearly sparked the ensembles’ unified embrace of the music’s captivating charm.

Returning to the podium to conduct the electrifying Márquez piece, music director Gerhardt Zimmermann addressed the audience, acknowledging the remarkable talents of the Youth Symphony as well as all the music educators present in the audience. His eloquent comments were both heartfelt and cautionary as he expressed concern over the limited if not diminishing presence of music and arts curricula in our public schools. He observed that undervaluing or eliminating music education, or relegating it to peripheral extracurricular status, was tantamount to leaving us a future without our souls. Then Zimmermann led the combined ensembles on a rhythmically lush and ebullient jaunt. It ended when, on the final foot-stomping note of the music, all the players rose at once from their seats — an exhilarating call to attention if ever there was one.

So speaking of souls, Mr. Zimmermann, Heaven called — again — and wants to talk to you about getting its orchestra back. Put your foot down, stand your ground, and keep ‘em on hold, Maestro.

Supported by engagingly, yet simple staging by Cara Consilvio, a well-prepared cast of singers told the archetypal story of Cinderella with charm and flair. Framing the production was  a sparse but colorful set and wonderful lighting by Dave Brooks. END_OF_DOCUMENT_TOKEN_TO_BE_REPLACED

END_OF_DOCUMENT_TOKEN_TO_BE_REPLACED

The music isn’t easy to play, either. Over the course of two hours, all of the musicians brought fantastic focus to the unrelenting tricky rhythms and countless layers of parts, all of which require a high level of individual responsibility. Even in the moments of calm, the accompaniment remains perpetually unsettled. Adams — who made a sprightly presence on the podium — combines minimalist, repeating motives in gradual layers, which eventually become so dense they overwhelm the senses. Lisa Wong deserves special mention for her thorough preparation of the Cleveland Orchestra Chorus, as does Jennifer Rozsa for the Children’s Chorus, which made a brief but memorable appearance in the last few minutes. END_OF_DOCUMENT_TOKEN_TO_BE_REPLACED