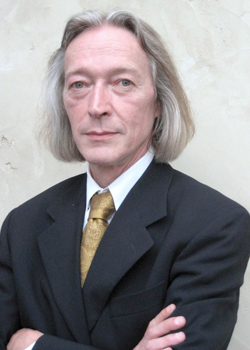 “This is one of my favorite piano concertos, and I think it’s one of Gershwin’s greatest works,” pianist Philip Thomson said during a telephone conversation. “I haven’t had a chance to perform it for a long time, so I’m thrilled to be able to play it again.” On Saturday, September 19 at 8:00 pm, Thomson will be featured in Gershwin’s Piano Concerto in F when Christopher Wilkins and the Akron Symphony open their season in E.J. Thomas Hall with a concert titled “American Journey.” The program will also include Aaron Copland’s El salón México and Rodeo Ballet, as well as Clint Needham’s Southern Air.

Thomson, who is beginning his twenty-first year of serving on the piano faculty at the University of Akron, said that he first fell in love with George Gershwin’s music as a high school student back in St. John, New Brunswick. “He was my hero, and I read all about him. In addition to writing great melodies, he was also a great pianist. He could get around the keyboard, and he knew how to write for the piano. Just like Chopin and Liszt, he thinks like a pianist. He gave the first performance of this concerto, just as he did with Rhapsody in Blue.”

Thomson added that although the Concerto in F is not neglected, he thinks it’s a wonderful piece that deserves to be performed more often. “I was just talking to one of my students about that, and I said that it is exactly what a piano concerto should be. It doesn’t aspire to be a virtuoso piece. It’s not a vehicle to show off but purely a wonderful piece of music. That’s what I love about it, it’s so sincere. The concerto comes one year after the Rhapsody, which Gershwin wrote in 1924. Although I love that piece, he had to write it in such a hurry that it is really more of a collection of irresistible themes. But the Rhapsody was such a success that conductor Walter Damrosch commissioned him to write a real piano concerto.”

Gershwin began writing the Concerto in F in July of 1925, and the first movement was completed that same month. The second and third movements followed in August and September. Thanks to the generosity of Australian composer and teacher Ernest Hutcheson, Gershwin was able to do most of his work on the piece in a practice cottage at the Chautauqua Institution. The cottage was declared off-limits for everyone until 4 pm daily. This enabled the composer to complete the full orchestration, which he did himself, on November 10. The Concerto in F received its first performance at Carnegie Hall on December 3, 1925 by the New York Symphony Orchestra under the direction of Walter Damrosch, with Gershwin as soloist.

I asked Thomson if he finds any of the concerto’s themes to be ‘Tin Pan Alley-esque?’ “Although this is a more formal piano concerto, it is nevertheless jazzy in a way, and that’s one of the things I love about Gershwin. People often say that the jazz players of his time thought he was too classical, and the classical players thought he was too jazzy. You can hear elements of both in this concerto. It’s got all those blue notes that are very jazzy or, as you said, ‘Tin Pan Alley-esque.’”

Will Thomson incorporate any ‘swing’ into his performance? “I asked the director of our jazz studies program if jazz musicians in the mid-1920s would swing the eighth-note passages — there are parts of this concerto where I can hardly help myself from hinting at a swing. For example, the opening theme of the second movement. While I’m not actually going to swing it, I am going to hint at it. There’s also a passage in the third movement that I don’t want to play too straight, because you can really hear the jazz in it. You can toy a little with places in this concerto, like when you’re playing Bach and you add the ornamentation that was customary of the time. To my ears, it is perfectly in keeping with the style of this concerto to suggest a swinging of the rhythms. But I would do that only if I were positive that if Gershwin were standing right there, he’d say, ‘That’s great.’”

What response did Thomson receive from the jazz studies director? “He said it’s an arguable point. But he gave me a good piece of advice. He told me if I want to do it, just do it, because the point is to make it sound good. And I admire that advice.”

Jackson began the program with a recitation of Langston Hughes’ poem “Helen Keller” — the first of five poems by Hughes that served as interludes between each piece on the first half. END_OF_DOCUMENT_TOKEN_TO_BE_REPLACED

Pianos with pins and tape on strings, a bass drum and tam tam, crotales, Almglocken, and vibes. Microphones were hooked up all around the instruments. The feed was sent to speakers around the room. Lighting designer Nicholas Houfek hung incandescent globes over the arrangement of instruments from thin black wires stretching across the beams. END_OF_DOCUMENT_TOKEN_TO_BE_REPLACED

From the podium, Elim Chan set an ambitious tone for the evening. The rising star conductor, here in her Cleveland Orchestra debut, has a commanding style, and every twist and turn in Saturday’s performance tracked closely with her baton. END_OF_DOCUMENT_TOKEN_TO_BE_REPLACED