Shakespeare is everywhere these days: not just at the roots of today’s literature, poetry, philosophy, pop culture, and theatre, but as the ultimate canonic figure in the arts. His fame helps keep him famous. Titles of novels riff on the fact that his work remains required reading; Supreme Court justices make headlines for doubting his authorship; tempests in teapots brew when people move his portrait. Classical music, with its piano-adorning composer busts, boasts figures of comparable monumentality. In presenting music on Shakespearean themes and scenarios in a recent concert, however, the Akron Symphony seized a chance to savor works of rarer vintages.

Music director and conductor Christopher Wilkins opened the program on Saturday, October 19 with a swell of sound worthy of E.J. Thomas Hall’s grandeur. Organist Robert Mollard thickened and strengthened the group texture in Ethel Smyth’s Overture to The Wreckers. The orchestra built to a thrilling climax, but just before this peak, principal trumpet Justin Kohan delivered a lovely, lyrical solo. The composer’s last bit of misdirection before a crashing conclusion, the passage suggested a moment of false hope in Smyth’s non-Shakespeare-based but darkly Shakespearean opera about collective violence, intrigue, and betrayal in a small coastal town. 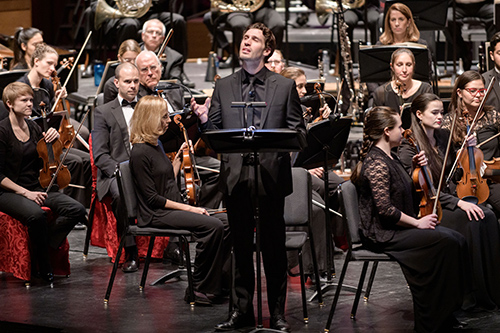 The brasses held strong throughout the evening, with tubist Kenneth Heinlein always at just the right volume. Stage lighting shifted throughout a suite of selections from Shostakovich’s score for a film version of Hamlet. Principal horn Meghan Guegold soared into the instrument’s high register, warning of trouble in Denmark. The violas and cellos sounded warm and assured in a transition to a ball scene, as actor Nick Steen emerged to deliver Hamlet’s first anguished monologue. Steen and Donald Carrier, here the ghost of Hamlet’s father, brought a theatrical energy to moments when Shostakovich’s music was clearly intended to slip beneath action in the original context.

Though their reading from music stands blocked engagement with the audience to some extent, the actors raged and contemplated convincingly as the music roiled beneath. Great percussion playing enlivened the ghost’s scene, in particular some spirited gong strikes. The timbre of a synthesized harpsichord rang out in the poisoning scene, jarring if heard as a Shakespearean sound but oddly appropriate for Shostakovich’s space-age moment in history. Concertmaster Tallie Brunfelt stopped time with a short, sweet solo, our one glimpse of Ophelia.

The Akron Symphony Chorus emerged for William Walton’s Henry V: A Shakespeare Scenario, another suite from a cinematic score. (The “Henriad” plays have continued to fascinate writers and directors, as the recent release of the Netflix film The King attests.) Sounding strong from the opening sunburst of harmony — surely an intentional homage to Ravel’s Daphnis et Chloé — to the camp triumphalism of the concluding carol, the choristers added immeasurable depth to the performance. 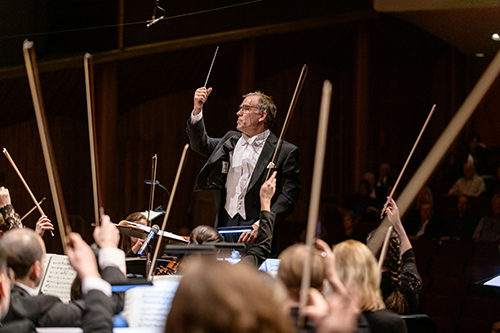 Steen and Carrier, here playing Henry and the narrating Chorus figure respectively, lent a sense of dramatic drive to long stretches of troop rallying. Walton’s quasi-French music may not leave as strong an impression as the Soviet brooding of Shostakovich or the post-Wagnerian fire and fury of Smyth, but on this occasion, it gave the ever-capable Akron Symphony plenty to work with in its laudable, ambitious quest to accomplish something distinctive.

Jackson began the program with a recitation of Langston Hughes’ poem “Helen Keller” — the first of five poems by Hughes that served as interludes between each piece on the first half. END_OF_DOCUMENT_TOKEN_TO_BE_REPLACED

Pianos with pins and tape on strings, a bass drum and tam tam, crotales, Almglocken, and vibes. Microphones were hooked up all around the instruments. The feed was sent to speakers around the room. Lighting designer Nicholas Houfek hung incandescent globes over the arrangement of instruments from thin black wires stretching across the beams. END_OF_DOCUMENT_TOKEN_TO_BE_REPLACED

From the podium, Elim Chan set an ambitious tone for the evening. The rising star conductor, here in her Cleveland Orchestra debut, has a commanding style, and every twist and turn in Saturday’s performance tracked closely with her baton. END_OF_DOCUMENT_TOKEN_TO_BE_REPLACED