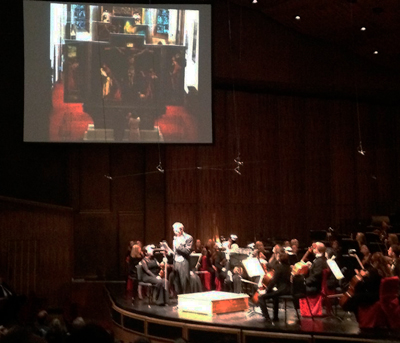 “Pictures at an Exhibition” was the title of the Akron Symphony’s concert in E.J. Thomas Hall on Saturday evening, November 18, but there were more pictures on the wall than those by Victor Hartmann that inspired Mussorgsky’s famous musical stroll through a gallery. The other two artists whose work was projected on either side of the stage were Charles E. Burchfield and Matthias Grünewald, their art the catalysts for pieces by Morton Gould and Paul Hindemith.

Playing the role of docent as well as conductor, Christopher Wilkins introduced the evening with the caveat that art and music occupy parallel universes. Having conceived of a program of music inspired by art, Wilkins took pains to separate the two art forms, projecting images before playing each musical work.

Burchfield’s fantastic nature paintings were the impetus for Gould’s seven-movement Burchfield Gallery. After Wilkins’ introduction, the Akron Symphony played five of them under the direction of associate conductor Eric Benjamin. For the Prologue, Gould fashioned a passacaglia based on the artist’s initials (C-E-B), introduced by the basses and answered by pointillistic gestures in the orchestra. “Spring—Ballad” is effervescent with brass. “Brookside Music—Interlude” features conversations between winds and percussion, ending with solo harp.

Gould’s suite is engaging and accessible, and if its musical content isn’t always of the highest order, the composer’s ear for orchestral color is always in evidence. So is his memory for other composers’ music — at one point, an orchestral ostinato strongly resembles the end of Sibelius’ Fifth Symphony. Benjamin and the Orchestra gave the suite a dashing, committed reading.

Wilkins introduced Paul Hindemith’s Symphony: Mathis der Maler with a detailed look at Grünewald’s masterpiece, an altar commissioned by the Church of St. Anthony in Isenheim, Alsace. Hindemith chose three aspects of that altarpiece to explore in luminous symphonic treatment. “Engelkonzert,” a movement that invokes a folk song played by the trombones, represents the angels (one of them may be Lucifer!) who serenade the Madonna and Child. “Grablegung” references Grünewald’s depiction of the entombment of Jesus with tender wind solos. “Versuchung des heiligen Antonius” represents the gory Temptation of St. Anthony in music resplendent with brass.

Wilkins — conducting from memory — and the Orchestra gave the Symphony a spacious, sonorous performance sometimes dominated by the brass, who have a natural acoustic advantage over strings and winds in the hall. An annoying technical glitch kept showing slides of the evening’s titles and ASO’s coming events on the screens well into the Angel Concert.

Wilkins’ introduction to Mussorgsky’s Pictures at an Exhibition was necessarily briefer than the others because not all of the drawings and paintings in Hartmann’s famous 1874 show have survived — just enough to give a taste of the artist’s quirky and sometimes bizarre tastes. The image of the Ballet of Chicks in their Shells drew a laugh from the audience, and the clock in the form of the Russian witch Baba Yaga’s Hut on Fowl’s Legs seemed to inspire a little shiver.

Again conducting from memory, Christopher Wilkins led a spirited performance of Ravel’s orchestration of Mussorgsky’s piano suite. Fine wind playing abounded, as did a few too many burbles from the brass. All ended splendidly, as it should, at the foot of the Great Gate of Kiev.

Every so often, the first seconds of a concert bring neither anxiety over how the rest will go nor twitchy overstimulation, neither boredom nor ecstasy, but a satisfying assurance. Some performances click right away, the musicians’ technique unimpeachable, their artistry and expression powerful, their manner warm but professional. Such concerts hold attention in a special way — the chances of a misstep negligible enough that listening never involves comparison to an abstract standard. In the Phaeton Trio’s recent tour de force in Rocky River, the initial gestures of the performance set a high standard that held throughout. END_OF_DOCUMENT_TOKEN_TO_BE_REPLACED

Musicians love a good metaphor: take, for instance, that of summiting a mountain. When a violinist speaks this way after playing all of Bach’s partitas, or a soprano recalls preparations for a Wagner opera, the image of the artist mounting some hostile peak offers implications of persistence, struggle, and of course triumph. Pianists might describe Beethoven’s sonatas this way. But how many have actually played at the top of a mountain? Archival video confirms that French pianist Pierre Réach literalized this image of the soloist at the summit over twenty years ago. A recent concert in Cleveland confirmed that the figurative Everest of Beethoven’s piano music still bears his banner as well. END_OF_DOCUMENT_TOKEN_TO_BE_REPLACED

The Cleveland Orchestra — or at least half of it — marked Valentine’s Day with a straight-through, 50-minute concert led by Belgian early music guru Philippe Herreweghe. The February 14 performance, marketed as a romantic evening of orchestral classics, played to a packed house (marketing works!). END_OF_DOCUMENT_TOKEN_TO_BE_REPLACED

Music is said to be a universal language, but it does speak with different accents. When you’re playing music by Jean Sibelius, it’s helpful to have a Finnish conductor on the podium, which is what made Susanna Mälkki’s pair of Cleveland Orchestra concerts so lucid and communicative earlier this month. END_OF_DOCUMENT_TOKEN_TO_BE_REPLACED