Ethel Smyth’s Overture to The Wreckers will open the concert, kicking off the Symphony’s yearlong Stand Beside Her project. That will highlight women composers and artists leading up to the 100th anniversary of the ratification of the 19th amendment in August of 2020.

The Shostakovich has its own complex history. The suite comes from his score to a 1964 Russian-language film adaptation of Hamlet. And thanks to a collaboration several years ago between Wilkins and Steven Maler, director of the Boston-based Commonwealth Shakespeare Company, the version presented in Akron will also involve text from the play.

“In the Walton, the narration really interacts with the music. It’s woven into it,” Wilkins said. “The Shostakovich now will deliver in the same way.”

Two Shakespearean actors, Nick Steen and Donald Carrier, will help make that happen. “Don is representing the elder of the two characters in both situations,” Wilkins said. “Nick is Hamlet, while Don is the ghost of Hamlet’s father. Then Nick is Henry V, and Don is The Chorus, which is essentially the narrator.”

The two works — like the composers who wrote them and the plays that inspired them — are very different. “The Shostakovich is dark, stark, elemental, and terrifying in the way that he can be,” Wilkins said. “The colors are bold and in your face, so it really meets the harshness and the unforgiving nature of parts of Hamlet’s perspective. His great and famous speeches are pretty unrelenting, and the music captures that.”

In Walton’s piece, the narrator helps to paint “the vast fields, the sense of moving from England to France, and the sight of 20,000 troops,” Wilkins said. “But we also rely on the music to convey the scene and the setting, and to transport us emotionally. We go through the whole build-up to the battle, the night beforehand, and the vigil, and then the battle itself is portrayed in music. The smoke clears, and Henry says, ‘The day is ours,’ and there’s this tremendous feeling of catharsis.”

Another point of comparison is the instrumentation. “Shostakovich is basically working with a Tchaikovsky-sized orchestra,” Wilkins said. “Walton is working with big forces. Triple winds, bass clarinet, a large percussion section, harp, keyboard — the whole works. The writing is extremely vivid, bright, and multifaceted.”

Further filling out the stage during Henry V will be the Akron Symphony Chorus, prepared by new director Chris Albanese. Among their contributions, Wilkins noted that they will sing the Agincourt Carol and one of Joseph Cantaloube’s Chants d’Auvergne, which Walton quotes. “And the final hymn for full chorus and orchestra is very exciting.” 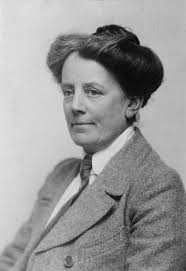 The last topic of our conversation was Dame Ethel Mary Smyth, a prolific composer and writer of the late Romantic era. “Some of her music sounds a bit like that interesting territory between Wagner and Benjamin Britten,” Wilkins said. He described her opera The Wreckers as powerful, with a dark and psychological story. It was inspired by tales of shipwrecks caused by false signaling from people on the coast, who would then loot the ship and murder the crew.

“It’s really grim and strange subject matter, and I thought it would go particularly well with Hamlet,” Wilkins said. “There’s almost something Shakespearean about the betrayal, and Smyth being British and a composer for the theater, I thought it was a good fit.”

Smyth was a deliberate choice to begin the season-long Stand Beside Her project. “Chronologically she comes first of everybody we’re highlighting, but she was also very active in the women’s suffrage movement,” Wilkins said.

Wilkins will discuss the program at 7:00 pm in a Preview from the Podium. After the concert, a group of musicians from the Orchestra will gather in the lobby for TalkBack, a look at the performance through their eyes. Tickets for the concert are available here.

Another note: on Friday, October 18 from 4:30 to 6:30 pm, Wilkins and players in the Orchestra invite you to join them at a free casual event: “Beerthoven’s Second” at Hop Tree Brewing in Hudson.

END_OF_DOCUMENT_TOKEN_TO_BE_REPLACED

Rodgers & Hammerstein’s Cinderella was originally produced for television in 1957 — seven years after the animated Disney film was released — and starred Julie Andrews. According to the Rodgers & Hammerstein website, it was viewed by over 100 million people. END_OF_DOCUMENT_TOKEN_TO_BE_REPLACED

The story line has its origin in an 1855 play and an 1842 farce that Thornton Wilder mined for his 1938 play The Merchant of Yonkers. When that turned out to be a flop, in 1954 Wilder made the crucial decision to re-center the show around the character of the legendary marriage broker Dolly Gallagher Levi and renamed it The Matchmaker. END_OF_DOCUMENT_TOKEN_TO_BE_REPLACED

The Dodero Center for the Performing Arts at the Gilmore Academy in Gates Mills is one feature of an impressive campus. The auditorium is shallow, the stage is deep, and the ensemble played without a shell. Throughout the program, the sound, especially in instruments’ lower registers, tended to disappear. END_OF_DOCUMENT_TOKEN_TO_BE_REPLACED