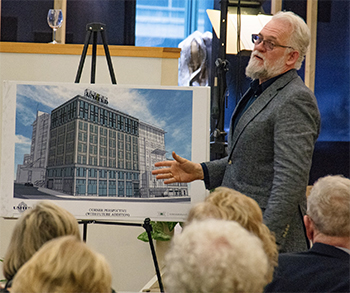 In an event on Tuesday, April 24, four of the organization’s instrumentalists came together to make a case for non-standard repertoire in non-standard spaces. The happening, which began at Uncorked Wine Bar and ended at Chill Artisan Ice Cream, doubled as a “sneak peek” at developer Tony Troppe’s forthcoming Blutique Hotel. Set to open later this year as the latest occupant of downtown Akron’s United Building, a former cigar factory, the still-in-progress space served as the concert venue. The landmark’s lobby-to-be offered flattering acoustics.

Flutist Jane Berkner, the organization’s founder, joined guitarist Stephen Aron “onstage” — at the top of a short staircase — to open the concert with selections from Astor Piazzolla’s Histoire du Tango. You could tell that the pair perform together frequently: the AronBerkner Duo rendered “Café 1930” and “Nightclub 1960” with the kind of coordination and detail-orientation that only the most seasoned ensembles can achieve. Tempos stretched and contracted organically. Berkner brought a strong, warm tone to low passages, and Aron’s chords transfigured the vibrations of nylon strings into washes of radiance.

Violist Michael Strauss used almost no vibrato in the opening Andante of Erwin Schulhoff’s Concertino for flute, viola, and bass — a convincing choice for this chant-inspired movement, which finds members of the group converging in unlikely pairs. Aside from some brief tuning scares — understandable, given the yawning gaps in range between instruments — the remaining three movements gave each player opportunities to shine. In the final Rondino, bassist Ann Gilbert tore into a series of double-stops with remarkable intensity. Though welcome and well-intentioned, Strauss’s introductory comments scrambled some facts about the underrated Czech rebel’s life, career, and deeply tragic death.

Cuban-American composer José Lezcano’s Sonata for Viola and Guitar (2004) deserves to become a staple of the repertoire. The guitar’s overall pitch range may lie between those of the viola and cello, but the opening Allegretto, with its running lines of notes, explores the substantial zone of overlap between the duet partners. Himself a guitarist, Lezcano demands somewhat more of his instrument than of the viola, but Aron breezed through string harmonics with ease, bringing a characteristic richness of tone to each ringing chord. The final movement, a “Tango-Fugue,” is an homage to Piazzolla in all but name.

The concert concluded with a Trio by Joseph Kreutzer, originally for flute, guitar, and clarinet (but here replaced by viola). The “Alberti bass” accompaniment, so typical of classical-period music, works perfectly on the guitar, and Berkner’s flute sounded — well, magical. Though the group snapped into focus during the tutti passages in the middle Adagio, the highlight of the piece was the concluding alla Polacca, where Berkner and Aron smiled broadly after Strauss’s particularly fiery passage. The players brought such charm and expertise to the performance that despite its substantial duration, the piece made for a fitting conclusion — to the concert proper, that is. Capping off a delightful evening, singer and bassist Don Dasco and pianist Stewart Freedman furnished compelling renditions of jazz and bossa nova standards for the after-event.