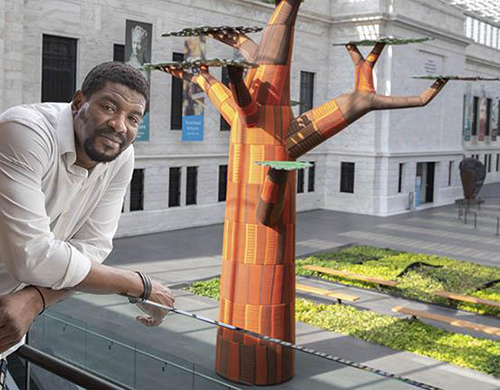 When Nigerian sound and installation artist Emeka Ogboh first received the invitation from the Cleveland Museum of Art to create a work for the Ames Family Atrium, he didn’t have a notion of what the work would be. But when he made his first site visit to the Museum in February of 2018, the city’s winter weather became a source of inspiration. “It was grey and not so happy looking,” Ogboh said with a chuckle during a Skype conversation from his home in Berlin.

After spending time in the Atrium and observing how it functions as a gathering place for social activities, he began to think, “why don’t I bring something to Cleveland from Nigeria?” adding that if he had made his first visit in the summer “it would have been a different piece.”

If you have not had the opportunity to experience Ámà: The Gathering Place, you have a few more weeks to do so — the exhibit will remain on display through the first of December. Commissioned for the Atrium, the installation uses sound, sculpture, and textiles that capture the sense of a village square reminiscent of Ogboh’s birthplace in Enugu.

For the music, Ogboh chose twelve Igbo folk songs that have been arranged specifically for the exhibit. “The songs are traditional and have been around for many years,” he said. “I chose some that are popular, some that remind me of my childhood, and others that have contemporary themes.”

The songs were recorded in Nigeria in the Igbo language by members of the J Clef Choral, which is based in the eastern part of the country. “Choirs are usually recorded as a group in stereo format,” he explained, “but for the sound installation I wanted to isolate each voice, so each member of the choir was in a separate booth.” 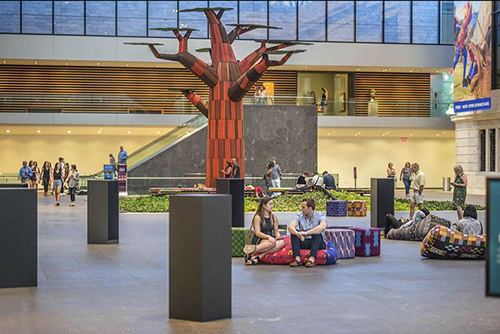 Fourteen speakers create an immersive soundscape. “When you are in the middle of the circle the music comes together in a sweet spot.” He noted that visitors will not see any power cords attached to the speakers. “The Museum didn’t want them lying on the floor because the atrium is busy space and is also rented out for social activities, so we had to come up with a solution.”

The sound is transmitted wirelessly to the speakers. “Inside each box is a speaker, a wireless receiver, and a battery pack. It was tricky but it worked out well. The guys at the Museum came up with that brilliant solution, I can’t take that honor.” 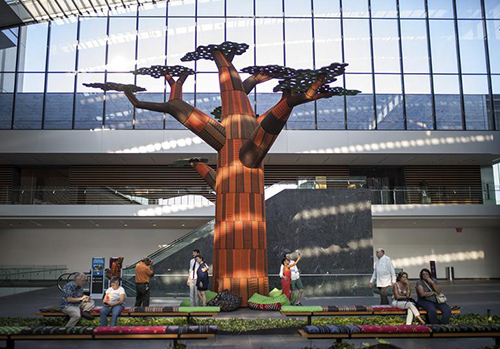 Because the installation divides the Atrium into three zones — the large cloth tree at one end, the bamboo trees at the other and the circle of speakers in the middle — another challenge was to figure out how to keep the sound from bleeding from one zone into the other. “As a sound artist, my main work is not done in the studio, but in the space itself. I worked with a sound designer. That was supposed to be a two-day job, but ended up being four.”

Emeka Ogboh said that he is quite happy with Ámà: The Gathering Place. “I’m very proud of it. It’s probably the best work I’ve done so far.”

Ogboh has participated in numerous international exhibitions, including documenta 14 (2017); Skulptur Projekte Münster (2017); the 56th edition of La Biennale di Venezia (2015); and Dakar Biennale (2014). In 2014 he was selected to create a public commission for the new Peace and Security building of the African Union in Addis Ababa. He was a finalist for the 2018 Hugo Boss Prize, and in 2016 he was awarded the Prize of the Bottcherstraße in Bremen. Ogboh is currently one of the inaugural fellows at Columbia’s Institute for Ideas and Imagination in Paris.

The Cleveland Orchestra — or at least half of it — marked Valentine’s Day with a straight-through, 50-minute concert led by Belgian early music guru Philippe Herreweghe. The February 14 performance, marketed as a romantic evening of orchestral classics, played to a packed house (marketing works!). END_OF_DOCUMENT_TOKEN_TO_BE_REPLACED

Music is said to be a universal language, but it does speak with different accents. When you’re playing music by Jean Sibelius, it’s helpful to have a Finnish conductor on the podium, which is what made Susanna Mälkki’s pair of Cleveland Orchestra concerts so lucid and communicative earlier this month. END_OF_DOCUMENT_TOKEN_TO_BE_REPLACED

END_OF_DOCUMENT_TOKEN_TO_BE_REPLACED

Today’s touring string quartets hew to so uniformly high a standard that it’s often little individual touches that make ensembles stand out. The Polish musicians who make up the Apollon Musagète Quartet showed up at Plymouth Church in Shaker Heights for their debut on the Cleveland Chamber Music Society series on February 4 in matching plaid suits and black shirts. And jettisoning their jackets, they played standing (except for the cellist). END_OF_DOCUMENT_TOKEN_TO_BE_REPLACED