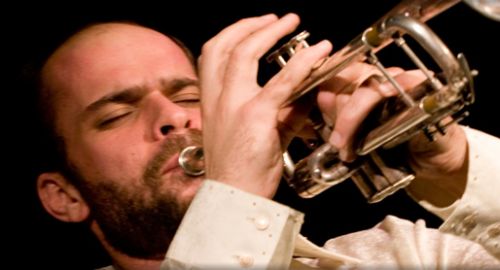 On Friday, April 15 at 7:30 pm in the Cleveland Museum of Art’s Gartner Auditorium, CMA’s Performing Arts Series will present Amir ElSaffar’s Rivers of Sound, a 17-member ensemble of musicians from all over the world, representing a broad spectrum of traditions from maqam to American jazz.

ElSaffar’s musical background make him uniquely qualified to lead a project like Rivers of Sound. Growing up in Chicago, the son of an Iraqi immigrant father and an American mother, his first instrument was the guitar. By the age of 13 he was playing The Beatles, Rolling Stones, Jimi Hendrix, and Eric Clapton. At the same time he was also playing the Haydn Trumpet Concerto, although he admits that he wasn’t really into the instrument — until he discovered Miles Davis at age 14, and soon developed a new appreciation for the trumpet.

Classical music also played an important part in his life, and he eventually earned a degree in classical trumpet at DePaul University. ElSaffar went on to play in the Chicago Civic Orchestra, where he worked with Pierre Boulez, Mstislav Rostropovich, and Daniel Barenboim. During that time, he regularly played in Chicago’s blues, jazz, and salsa clubs. After moving to New York City he focused on jazz. Then at age 25 he discovered Arabic music — particularly Iraqi maqam — laying the grounds for the next stage of his career.

During a recent telephone interview, Amir ElSaffar said that maqam (pronounced maqām) is a modal system found throughout the Arabic-speaking world. “Everywhere from Morocco to western China you find some kind of maqam tradition,” he pointed out. “But when it comes to Iraqi maqam there is not a lot of information. I’m just now creating a website that gives context to help people understand the tradition.”

ElSaffar explained that Iraqi maqam consists of a repertoire of melodies with specific intervals that a singer or instrumentalist is expected to improvise around in order to create their own personalized variations on the melodic themes — which then become primary, secondary, or tertiary themes in structured compositions.

“Each of the melodies has some draw to Iraqi culture, such as a historical or a mythological event,” he said. “They can be also be related to a particular place. Usually the name will tell you something about their origins. Each melody also has an emotional aspect. The general feeling is some kind of longing: they sound sad but it is a bit more nuanced than that. There is one song with a particular mournful sound that is supposed to represent the sighs of the survivors of the attack on Baghdad in 1258. Songs that have to do with celebratory religious occasions are more joyous.”

ElSaffar’s first composition that explored the intersection of jazz and maqam, titled Two Rivers, was commissioned by the Painted Bride Arts Center in Philadelphia and premiered in 2006. “They wanted a piece that drew on my experience as a jazz musician as well as an Iraqi maqam musician,” the composer recalled. “At the time I had some resistance to the idea because I really loved both musical styles on their own but didn’t feel how or where the confluence could possibly come about.”

For nearly six months ElSaffar contemplated the idea. Would he be disrespecting the Iraqi maqam to include it in a composition with drum set and saxophone? Eventually he found resolution. “It wasn’t like beams of light, or magical things happened, but as I meditated about the different maqam melodies, I began to feel that it somehow made sense to use the ones that are a little bit lighter, and the ones that contain different geographical influences. There are certain melodies that cannot be touched, or at least not now.” He also realized that the commission gave him an opportunity to present maqam music and tonalities to an audience that otherwise might not ever be exposed to it. “Once I got past this dilemma, I wrote the music in two weeks.”

ElSaffar said that in writing Two Rivers he discovered that certain maqam modes have Western jazz equivalents. “One mode in particular is called saba, which has a major third and a minor third in it and is very akin to the sound of a sharp-9 chord in jazz or blues. Jimi Hendrix used it in Purple Haze.”

Another mode that corresponds with jazz uses the “half-flat,” which exists somewhere between a major and minor third. “You’ll hear singers, harmonica players, and guitar players bend up the note.”

ElSaffar also found historical correlations between maqam and Western music. “A lot of African slaves who came to the U.S. were Muslim. There’s very little record of what their musical practices were, but there is evidence that suggests that the call to prayer and canonic recitations were happening on the plantations. And some of the instruments that were brought over later became the banjo, so there is a link to African, and by extension, to Middle Eastern music. It took time, but I realized that I wasn’t making any new connections. I was just uncovering something that has existed all along.”

ElSaffar also pointed to the common root that is shared by the Western and Eastern tonal traditions. The Greek modes, which form the basis of Gregorian chant, later became the basis for harmony in the West, while those same modes evolved into a microtonal system in the East. “But what we now know is that those ‘Greek modes’ existed before the ancient Greeks,” he said. “A tablet dating from 1750 BCE was discovered in Babylon in the 1950s, which indicates that this tonal system is even older than was imagined before. So it all kind of comes full circle.”

Jackson began the program with a recitation of Langston Hughes’ poem “Helen Keller” — the first of five poems by Hughes that served as interludes between each piece on the first half. END_OF_DOCUMENT_TOKEN_TO_BE_REPLACED

Pianos with pins and tape on strings, a bass drum and tam tam, crotales, Almglocken, and vibes. Microphones were hooked up all around the instruments. The feed was sent to speakers around the room. Lighting designer Nicholas Houfek hung incandescent globes over the arrangement of instruments from thin black wires stretching across the beams. END_OF_DOCUMENT_TOKEN_TO_BE_REPLACED

From the podium, Elim Chan set an ambitious tone for the evening. The rising star conductor, here in her Cleveland Orchestra debut, has a commanding style, and every twist and turn in Saturday’s performance tracked closely with her baton. END_OF_DOCUMENT_TOKEN_TO_BE_REPLACED