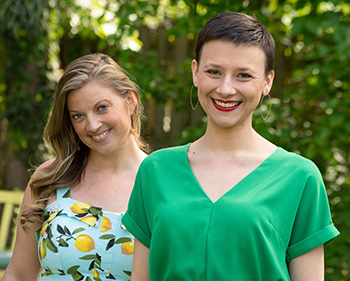 When soprano Anna E. White and mezzo-soprano Katie Fowler (left to right) met in the Cleveland Chamber Choir four years ago, they discovered they had one major thing in common. Both were balancing careers as professional vocalists with their responsibilities as mothers with small children at home. Three and a half years later, the two have created Musings of a Singing Mother, a cabaret show that celebrates the joys and complications of their everyday lives.

“The concept of the working mother is not new,” White said in a recent telephone conversation, “but because we have to practice at home and prepare for our rehearsals at night, we can be working on a phrase in an Italian aria and finding ourselves changing a dirty diaper or consoling a crying child in the same room. Those lives exist side by side, and we decided to put them on the stage to show people what we do.”

Having already presented their show in Medina in June, the duo will give it a second performance on Saturday, July 27 at 7:30 pm at the Aurora School of Music, where both serve on the faculty. They’ll be joined by pianist Will Hamilton and cellist Faith Rohde. Admission is free.

“It’s not a typical recital,” White said. “We’ll share anecdotes about our children in the day-to-day lives that we lead. There’s a lot of acting and we’ll be conversing with the audience as if they’re in our living room.”

The playlist comprises arias from Mozart’s Così fan tutte, Bizet’s Carmen, Donizetti’s Don Pasquale, Gounod’s Roméo et Juliette, and Delibes’ Lakmé, along with art songs by Schumann, Brahms, Rachmaninoff, Britten (A Charm of Lullabies) and Whitacre, and show tunes from The Music Man and Baby. There’s also a surprise or two, and a couple of parodies the duo have tailored to the theme of the program.

I asked White why they decided to include the “Libera me” from the Verdi Requiem. “I sang the piece with the Cleveland Orchestra Chorus a few years ago,” she said, “and at the end, the soprano soloist sings this heartfelt aria. I happened to be five days late with my second child, so the concept of ‘deliver me’ took on a whole new meaning. I sing a snippet of it to show how I was feeling at the time.”

Having finally given birth, White later found Verdi useful in comforting her daughter when she was fussy. “When singing and rocking her didn’t work, I put on Verdi’s Requiem, and the thing that calmed her down the most was the ‘Dies Irae.’ So I have our pianist play a section of that to get the feeling. Although it’s very alarming and intense, it was a lullaby for her.”

One of the duo’s parodies repurposes the famous Duetto buffo di due Gatti, attributed to Rossini, that portrays two insistently crooning felines. “Instead of ‘Mi-au’ we sing ‘Mom-my,’ White said.

Another parody is their adaptation of Jake Heggie’s Alas! Alack. “I got to meet the composer at Baldwin Wallace during Cleveland Opera Theater’s {Now} Festival. Heggie was actually the inspiration for our show,” White said. “On one particular day, my children wouldn’t stop interrupting me, and I thought a parody of Heggie’s song would work really well. I got Jake’s permission, started coming up with new phrases, and created the ‘toddler’ version.’” The first stanza:

Alas! Alack!
My children are calling for me again!
Oh, it’s my oldest who wants to know if she can have a snack.
I never knew to be a mother means I have
My own restaurant with lots of orders
Not one thing I make for them will they like
Not one thing!
I fear it’s alack-Alas! Ah!

White said that the two singers found such an abundance of material that they “had a little too much fun” putting the show together. “We had to narrow it down by a lot, otherwise it would have turned into a three-night Wagnerian opera situation.”

So far, performances of Musings of a Singing Mother have been presented auditorium-style, but White and Fowler are eager to explore other venues that will allow them to perform it in more of a club ambiance. While they think the content will resonate best with those who are both parents and musicians, everybody should be able to enjoy what this show has to offer.

“Honestly, the concepts we are sharing are about life in general, which is full of joy and struggle and laughter and real moments. That’s what we’re trying to communicate,” White said. “After the Medina performance, I talked to one couple who didn’t have children and weren’t involved in any way with music, and they just loved it.”

Download the program booklet with texts and translations here.

Supported by engagingly, yet simple staging by Cara Consilvio, a well-prepared cast of singers told the archetypal story of Cinderella with charm and flair. Framing the production was  a sparse but colorful set and wonderful lighting by Dave Brooks. END_OF_DOCUMENT_TOKEN_TO_BE_REPLACED

END_OF_DOCUMENT_TOKEN_TO_BE_REPLACED

The music isn’t easy to play, either. Over the course of two hours, all of the musicians brought fantastic focus to the unrelenting tricky rhythms and countless layers of parts, all of which require a high level of individual responsibility. Even in the moments of calm, the accompaniment remains perpetually unsettled. Adams — who made a sprightly presence on the podium — combines minimalist, repeating motives in gradual layers, which eventually become so dense they overwhelm the senses. Lisa Wong deserves special mention for her thorough preparation of the Cleveland Orchestra Chorus, as does Jennifer Rozsa for the Children’s Chorus, which made a brief but memorable appearance in the last few minutes. END_OF_DOCUMENT_TOKEN_TO_BE_REPLACED