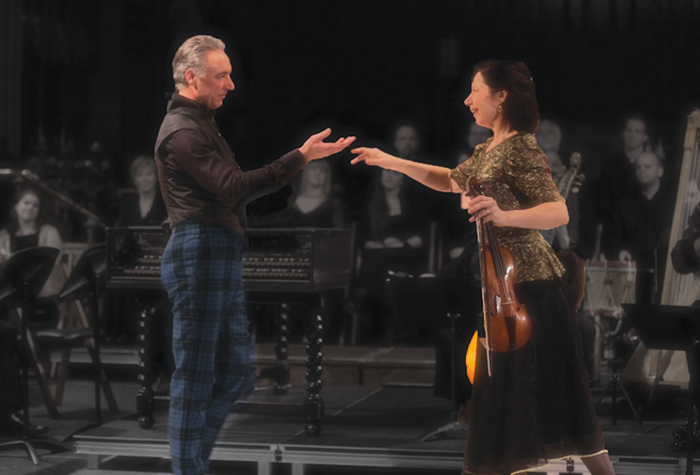 Apollo’s Fire brought baroque dance in both its noble and theatrical styles to its engaging program, “A Harlequin Romance” at the Maltz Performing Arts Center in University Circle on Saturday evening, April 9. Dancers Julie Andrijeski and Steven Player were the headliners, but concertmaster Olivier Brault also got into the act, as did several orchestra members in an encore.

Artistic director Jeannette Sorrell wrote that the program was inspired both by the “Boy Meets Girl etc.” novels published by Harlequin Books in the 1960s and by the tradition of Italian street theatre called Commedia dell’arte, featuring Harlequin, Columbine, and other familiar characters.

While the audience was being seated, Player (as Harlequin) and Andrijeski (as Columbine) were busy sweeping and dusting in the aisles and onstage. When the musicians appeared, Brault pretended to give Andrijeski a rudimentary lesson on the violin before the ensemble launched into Jean-Baptiste Lully’s “Chaconne des Scaramouches et Arlequins” from Le Bourgeois Gentilhomme, which introduced the theatrical style of dance.

Handel’s Overture and March from Scipione led to Lully’s “Passecaille” from Persée and Handel’s “Entrée, Sarabande & Gigue” from Terpsichore (also known as Il Pastor fido), featuring Andrijeski and Player in their noble dance mode. The couple circled each other in a highly stylized flirting session, then Player became the male show-off with leaps and fancy leg twitches. They joined back together for the spirited Gigue.

The dancers returned at the end of the evening for a full-fledged Commedia dell’arte episode, choreographed to Telemann’s Overture Burlesque, which includes set pieces for Harlequin and Columbine as well as for Scaramouche, Pierrot, and Mezzetino — appearing in the guise of a Turk.

Player goose-stepped as Harlequin, reappeared in laughably long sleeves as Pierrot (which Andrijeski wrapped around him like a straitjacket), and finally returned in exotic garb as the Turk. Andrijeski was his perfect comedic counterpart, striking him on his bottom with a real slapstick.  As the surprise of the evening, Olivier Brault traded his violin for a spirited, athletic portrayal of Scaramouche (who knew he was a great dancer?)

Before intermission, Johann Sebastian Bach’s Concerto in d for two violins seemed to have wandered in from a completely different program, but Brault and Johanna Novom gave it an energetic and sensitive reading with Jeannette Sorrell conducting from the harpsichord.

Before the Overture Burlesque, Apollo’s Fire delivered a similarly lively reading of selections from Telemann’s picturesque (as well as picaresque) Don Quixote Suite, depicting his attack on the windmills, his sighs of love, Sancho Panza being tossed in a blanket, and Our Hero sleeping (a rather fitful doze — he was apparently dreaming of galloping horses, pictured via col legno violins and violas). Here, Sorrell conducted in front of the ensemble, leaving the continuo duties to Simon Martyn-Ellis (theorbo and guitar). Player and Andrijeski joined the ensemble on violin and guitar for this colorful piece.

At the end of the program, Sorrell announced that the ensemble would encore with an English country dance — the British equivalent of a square dance. Half the company danced it in pairs while the rest played a tune many of us know as Noël sing we clear. Off-topic perhaps, but fun.

Jackson began the program with a recitation of Langston Hughes’ poem “Helen Keller” — the first of five poems by Hughes that served as interludes between each piece on the first half. END_OF_DOCUMENT_TOKEN_TO_BE_REPLACED

Pianos with pins and tape on strings, a bass drum and tam tam, crotales, Almglocken, and vibes. Microphones were hooked up all around the instruments. The feed was sent to speakers around the room. Lighting designer Nicholas Houfek hung incandescent globes over the arrangement of instruments from thin black wires stretching across the beams. END_OF_DOCUMENT_TOKEN_TO_BE_REPLACED

From the podium, Elim Chan set an ambitious tone for the evening. The rising star conductor, here in her Cleveland Orchestra debut, has a commanding style, and every twist and turn in Saturday’s performance tracked closely with her baton. END_OF_DOCUMENT_TOKEN_TO_BE_REPLACED