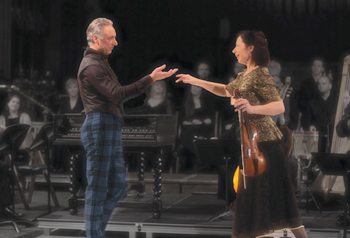 When Apollo’s Fire presents four performances this weekend of “A Harlequin Romance,” its final show of the season, Julie Andrijeski and Steven Player, who have made brief appearances as dancers with the orchestra in the past, will play a more central role in exploring both noble and popular forms of baroque movement to corresponding music by Georg Philipp Telemann.

“This is the rare occasion when I’ll be dancing in more than a cameo role,” said Andrijeski, who can usually be spotted playing violin in Apollo’s Fire. We spoke by telephone during a break in her rehearsals with Player last week.

“Steve and I will mostly be dancing this time but also playing violin and guitar a little bit. There’ll be two different type of dances: a set of the more noble dances to Telemann’s Don Quixote Suite in the first half, then in the second half we’ll be dancing to the Overture Burlesque, which is more of a commedia dell’arte presentation. That’s where Harlequin, Columbine, Scaramouche, Pierrot, and other characters come in. Steve will be playing most of them, but Olivier Brault will appear as Scaramouche. I just get to be Columbine.”

Those noble dances will be based on authentic period choreography, thanks to the French monarch Louis XIV. “Louis had a big competition among his dancing masters to come up with a way to notate court dances so they could be disseminated all over Europe,” Andrijeski said. “There were several notation systems out there, but the Beauchamp-Feuillet notation — Pierre Beauchamp came up with it and Raoul-Auger Feuillet published it — was the one that really took off.”

Andrijeski said that the notation is pretty easy to read once you understand the language. “It shows the framework of the dance with the music at the top, and it’s laid out like a map of a ballroom. Sometimes the framework of the dances resembles the gardens at Versailles — it’s very symmetrical and full of beautiful curves and mirror images. It’s beautiful to behold.” 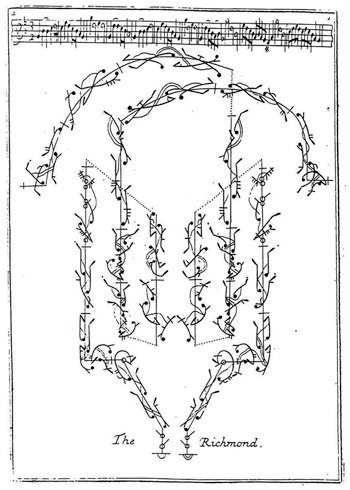 Julie Andrijeski, who is Senior Instructor of Baroque Violin and Dance at Case Western Reserve University, is also busy rehearsing dancers for a joint Oberlin-Case production of Henry Purcell’s Dido and Aeneas, two projects she says complement each other in nearly every respect, including demonstrating the contrast between noble and popular dance forms. Deferring to her partner for a rundown on the latter, she handed the phone off to Steve Player.

“I think we spend too little time looking at the opposite of fine and noble music,” Player said. “There’s also the grotesque style of dancing that was used onstage with odd characters, and this is the style of dance we’ll use for Telemann’s Overture Burlesque.”

Happily, there’s some period documentation for “ignoble” dance as well as for its courtly cousin. “We’re fortunate that a book, The New and Curious School of Theatrical Dancing, was published at the beginning of the 18th century by Gregorio Lambranzi, an Italian dance master living in Nuremberg,” Player said. “It has fantastic engravings and illustrations with little descriptions underneath featuring sailors, witches, and Turks. Some of those scenarios are like watching Laurel and Hardy — it’s the same kind of slapstick humor you had during the silent movie era. 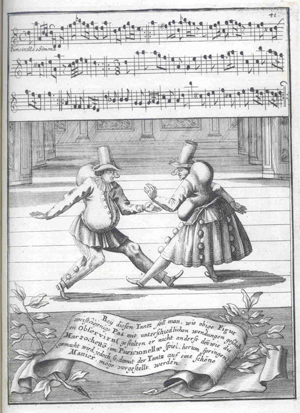 “In noble dance, you have very fine positions of the feet, like in the ballet with the toes pointing out. In the commedia, you have the reverse: toes are pointing in, your knees knock, and it’s much more extreme. These are things you’d never do in noble dancing, where the idea is not to look stupid,” Player said.

He added that there’s also much to be learned about this more popular style from what noble dance instructors told their pupils not to do. “You have to read between the lines.” In doing that, Player hopes to achieve a balance between the two styles. “We’re very fond these days of extracting the very noble and high art of the past at the expense of its humanity. People really haven’t changed very much over those several hundred years. The humor is still there, and we still worry about the same things.”

With rapid changes of scenes and music, the dancers in “A Harlequin Romance” won’t have time for any kind of elaborate costumery, but Steven Player doesn’t find that to be much of an issue. “It’s nice to try to put your body in certain positions that hint at a character without actually having to dress up. I used to work in costume when I was younger, but later on I found that I could dance a galliard without needing to dress up. I could actually carry myself in a way that gave the impression of having a costume on.”

In addition to the danced selections on this weekend’s programs, Olivier Brault and Johanna Novum will be featured in Johann Sebastian Bach’s double violin concerto. The four performances, conducted by Jeannette Sorrell, will take place at The Bath Church in Akron (Thursday, April 7 at 7:30 pm), St. Noel’s Church in Willoughby Hills (Friday, April 8 at 8:00 pm), The Maltz Center at CWRU (Saturday, April 9 at 8:00 pm), and Gamble Auditorium at Baldwin Wallace (Sunday, April 10 at 4:00 pm). Tickets may be reserved online.

Jackson began the program with a recitation of Langston Hughes’ poem “Helen Keller” — the first of five poems by Hughes that served as interludes between each piece on the first half. END_OF_DOCUMENT_TOKEN_TO_BE_REPLACED

Pianos with pins and tape on strings, a bass drum and tam tam, crotales, Almglocken, and vibes. Microphones were hooked up all around the instruments. The feed was sent to speakers around the room. Lighting designer Nicholas Houfek hung incandescent globes over the arrangement of instruments from thin black wires stretching across the beams. END_OF_DOCUMENT_TOKEN_TO_BE_REPLACED

From the podium, Elim Chan set an ambitious tone for the evening. The rising star conductor, here in her Cleveland Orchestra debut, has a commanding style, and every twist and turn in Saturday’s performance tracked closely with her baton. END_OF_DOCUMENT_TOKEN_TO_BE_REPLACED