The original Concerto di donne, Laura Peverara, Anna Guarini, and Livia d’Arco, were among the first female professional singers and their vocal prowess inspired such composers as Luzzascho Luzzaschi, Benedetto Ferrari, Barbara Strozzi, Claudio Monteverdi, and Virgilio Mazzocchi to write groundbreaking music for them to sing at the Duke’s private concerts.

After a prelude that includes the traditional Catalan Song of the Birds and a Passacaglia della Vita attributed to Stefano Landi, the first of several Chaconnes (a spirited one by Andrea Falconiri) accompanies the Amandas to their individual plexiglass compartments for a vocally distanced performance of Luzzaschi’s Dolcezze amarissime.

“Who needs the three tenors?” Sorrell asks rhetorically in her opening remarks. The ladies seem to answer, “Not us!” as they effortlessly negotiate Luzzaschi’s fluttery melismas and ornaments.

On either side of the madrigal, Ramsay and Simms take solo turns on a harp toccata by Luzzaschi and a theorbo passacaglia by Alessandro Piccinini, followed by a Biagio Marini passacaglia featuring Fullana and Tanabe.

The first half of the program ends with O Felix Jucunditas by the Bohemian-born composer Samuel Friedrich Capricornus.

“Love is Too Much” and “Disdain” are the titles of two sets that follow intermission — picking up prominent themes from the madrigal tradition and giving each Amanda a solo work.

In between, the instrumentalists play a Marini sonata, and the three ladies join forces for Luzzaschi’s Troppo ben può questo tiranno. 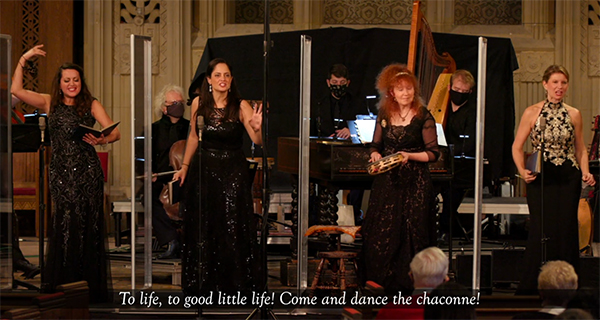 For the last set, we’re suddenly and a bit unaccountably swept away to Spain for a pair of Recercadas by Diego Ortiz and a typically effervescent Apollo’s Fire finale, a “Chaconne Party” by Juan Arañes. A long way from Ferrara, but great fun.

Speaking with the conductor by phone in Cleveland this past Wednesday, I began our conversation by telling him that I had a wonderful conversation with Stefan Jackiw, who was singing his praises (read the article here). Especially how sensitive the conductor’s ear is with regards to color, which Jackiw noted is quite important in the concerto’s passacaglia. END_OF_DOCUMENT_TOKEN_TO_BE_REPLACED

The music isn’t easy to play, either. Over the course of two hours, all of the musicians brought fantastic focus to the unrelenting tricky rhythms and countless layers of parts, all of which require a high level of individual responsibility. Even in the moments of calm, the accompaniment remains perpetually unsettled. Adams — who made a sprightly presence on the podium — combines minimalist, repeating motives in gradual layers, which eventually become so dense they overwhelm the senses. Lisa Wong deserves special mention for her thorough preparation of the Cleveland Orchestra Chorus, as does Jennifer Rozsa for the Children’s Chorus, which made a brief but memorable appearance in the last few minutes. END_OF_DOCUMENT_TOKEN_TO_BE_REPLACED

Warner was a fitting choice not just symbolically, but also sonically. The combination of Baroque strings, theorbo, harpsichord, and organ created a nice blend and balance, allowing the opportunity for softer instruments to stand out. In Johann Rosenmüller’s Sonata à 5 in g, Doug Balliett’s violone pizzicatos resonated beautifully, and in Johann Heinrich Schmelzer’s Sonata in d, harpsichordist Elliot Figg became an equal player in the texture with his clever improvisations. The slight exception was Joshua Stauffer on theorbo — despite the instrument’s big physical presence on stage, he received little time in the spotlight. END_OF_DOCUMENT_TOKEN_TO_BE_REPLACED