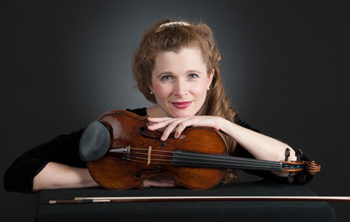 This summer, Apollo’s Fire audiences have had the opportunity to hear violinist Susanna Perry Gilmore explore two dimensions of her musical persona that aren’t part of her day job as concertmaster of the Omaha Symphony Orchestra — and which Jeannette Sorrell and Cleveland’s Baroque Orchestra are largely responsible for developing.

Perry Gilmore appeared as a folk fiddler in “Mediterranean Roots” during the month of June, then turned to Baroque violin as soloist in the “Summer” concerto of Vivaldi’s The Four Seasons. The Vivaldi program was presented twice earlier this month in Northeast Ohio before going on tour to Youngstown and the Tanglewood, Gretna, and Ravinia Festivals. The show returns for two final performances at Cain Park and Laurel School’s Butler Campus on July 29 and 30.

How did the violinist originally become involved with Apollo’s Fire? “It was a serendipitous meeting,” Perry Gilmore said in a telephone conversation, explaining that Sorrell had made a guest appearance with the Omaha Symphony in the spring of 2014 in an all-Vivaldi program. “As concertmaster, I wanted to be as helpful as possible. We got to know each other, and she liked my playing. I asked her to let me know if any of my ornamentation sounded ‘too Irish’, because I hadn’t done a lot of Baroque study at that point.”

Perry Gilmore said that remark made Sorrell’s eyes grow really wide. It turned out that the conductor was looking for a fiddler for her “Sugarloaf Mountain” Countryside Concerts just a few months away. “I happened to be free during those two weeks, and it was destiny,” the violinist said.

Looking to hone her Baroque sensibilities, Perry Gilmore enrolled in Oberlin’s Baroque Performance Institute the following summer, “with a lot of encouragement from Jeannette. Going to BPI was truly an immersion,” she said. “I hit the ground running, and it was a great way to learn. By January of 2016, I had bought my own Baroque violin and have kept traveling down that rabbit hole. Now, when my schedule permits, I can do both crossover and classical Baroque styles.”

Though her formal study was always in classical violin, Perry Gilmore had been interested in world folk music since she was nine years old. “I finally broke out of the Suzuki books and was given Bartók — first you start with the children’s album, then the 44 violin duos, the Roumanian Dances, and Mikrokosmos. It completely captivated me.”

The Buffalo native began playing Celtic fiddle in her early teens. “It was a natural continuation of my heritage on my father’s side,” she said. “I lived in England for five years beginning at age 17, and took the train or bus from Yorkshire or Oxford to study with a wonderful teacher in London.”

One day, she got off the tube on her way to a lesson and heard Irish music coming from a nearby pub. “I sat in with the band, then walked around the corner to my lesson, reeking of pub smoke,” she said. Though she had the opportunity to join in on many sessions during that period, Apollo’s Fire has now become her main outlet for crossover music, including the ensemble’s “Sephardic Journey” show. 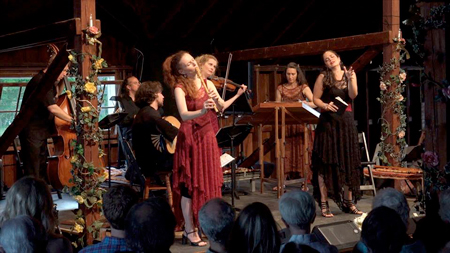 How does a show like “Mediterranean Roots” come together? “Amanda Powell, Brian Kay, and Dave Morgan had put lead sheets together in advance, and we had some scratch recordings to listen to for points of departure, but a lot of creative improvisation took place during rehearsals,” Perry Gilmore said. “We started on Monday, and by the time Wednesday came along, things had changed greatly. By the first performance, the band had evolved into a well-conceived unit. But I did more improvisations that week in styles I hadn’t lived in than I ever had before.”

For Vivaldi’s The Four Seasons, three soloists are taking turns with the four concertos. “Alan Choo is playing Spring, I’m doing Summer, and Olivier Brault is taking Autumn and Winter, and there are other pieces being played between the concertos,” she said.

Susanna Perry Gilmore is happy to have been assigned “Summer.” “It’s the first concerto I ever played — with the Nashville Youth Symphony at the age of 14.” She’s also looking forward to playing the concerto al fresco during the appropriate season. “It’s always interesting performing outdoors. Real natural events can take place while you’re playing.” Case in point: at the Gretna Festival in Pennsylvania, Apollo’s Fire recently played the Vivaldi on a hot evening right after a huge thunderstorm. “In the section where the soloist portrays little birds, there were real birds in the rafters answering my trills. I just expanded that a moment a bit and waited for them to sing. It was really wonderful.”

After undergraduate studies Oxford and graduate work at the Guildhall School in London and the New England Conservatory, Perry Gilmore was appointed concertmaster in Memphis in 1997, then took up her current post in Omaha beginning in 2012. She’s enjoying both the city and the orchestra. “Omaha’s a happening place, the Orchestra is in great health as far as being supported by the community, and it’s a lovely place to live — a day away from everywhere.”

But the violinist is a bit amused at how the Atlantic-facing half of the country regards the other half.  “When you’re anywhere East of the Mississippi, people can’t remember where you live. ‘How’s Oklahoma City? You’re out in Sioux City, right? You’re living in Des Moines? How’s Kansas City?’ They just try to come up with something out there in the big square states. It’s funny.”

You could see the relationship at work on a practical level. Repertoire for two players at the same piano requires a certain choreography. There’s just one of each pedal to share, and the hand crossings left and right — which can be so fun to watch a soloist pull off — get more complicated when another person’s involved. At times, Pompa-Baldi drew a hand away from the keyboard and into his body, making room for Friscioni, and at the close of a few delicate phrases, the two were crouched together over the same final notes at one end of the instrument. END_OF_DOCUMENT_TOKEN_TO_BE_REPLACED

The signature sounds of these famous film scores are not so much John Williams’ invention as allusions to other classical pieces. The foreboding half-step from Jaws, growing more and more furious in the cellos and basses, shares something with Dvořák’s “New World” Symphony and Bartok’s Miraculous Mandarin. END_OF_DOCUMENT_TOKEN_TO_BE_REPLACED

Unlike most concert pianists, who seem to have taken to the keyboard while they were still learning to walk, Kharitonov only began his studies at the age of 16. But he plays with such naturalness and easy virtuosity that you’d never imagine he came late to the party. END_OF_DOCUMENT_TOKEN_TO_BE_REPLACED

Each concert in “Beethoven and Beyond” includes two of LvB’s string quartets with a contemporary work in between, usually by way of contrast, although in her introductory remarks, primo violinist Annie Fullard drew thematic connections between the pizzicati in Beethoven’s “Harp” Quartet and Jessie Montgomery’s Strum. END_OF_DOCUMENT_TOKEN_TO_BE_REPLACED