While that combination of works might be found on any modern orchestra’s subscription concerts, Sorrell promises to deliver an extra level of excitement this weekend.

In a recent interview, she said, “Whenever you play Beethoven’s music on period instruments, the sense of revolutionary struggle that his music is all about takes on new meaning. It really is a struggle to avoid breaking the instruments. He pushes the limits. The Fifth Symphony will be amazing, like people have never heard it before.” 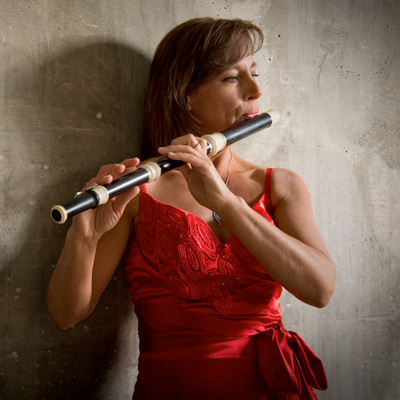 Flutist Kathie Stewart can testify to that. “I’ve been playing mostly Baroque music with Apollo’s Fire for 25 years, sometimes venturing into Mozart,” she said in a telephone conversation. “Coming to Beethoven on period instruments makes you realize how wild and revolutionary his music is. I wonder if his flute players thought he was crazy. Most of his music lies very high, and it’s exhausting to blast away in that range all the time.”

Stewart regularly plays a Baroque-style instrument with a single key. For the Beethoven performances, she will turn to a classical-era flute, a copy of a 1795 instrument with eight keys. What’s the difference? “On a Baroque flute, some notes are milder than others. The F, for example, is gentle and fragile. The keys on the later flute even that out, making all the notes strong. This flute is designed to project in an orchestra.”

Stewart thinks that coming to Beethoven after playing Baroque and early Classical music for most of her career replicates what a flutist in Beethoven’s time must have experienced. “If I had just been playing conventional flute all the time, Beethoven wouldn’t seem so modern.”

It’s not just about equipment, either. “The Fifth Symphony is written in 2/4 time, but you have to count it in one beat to the bar, and it’s easy to get lost,” she said. “It’s the kind of piece you almost need to memorize. And Beethoven, being Beethoven, sometimes decides to have the flute enter a bar sooner or later than you think it should. You can’t count it, you just have to know it.” 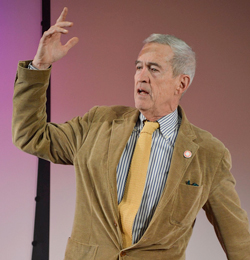 Harvard professor Thomas Forrest Kelly (above) will put the music in context in “Beethoven’s Vienna: When the Fifth was New,” pre-concert talks that will begin an hour before each performance.

Violinist Noah Bendix-Balgley, who will be making his period instrument debut this weekend in the Beethoven concerto, is well-known to local audiences as a frequent participant in ChamberFest Cleveland. He met Sorrell when he was concertmaster of the Pittsburgh Symphony.

“I worked with her a couple of times, performing the Bach Brandenburgs and her ‘Bach’s Coffeehouse’ program,” he said in a telephone conversation. “We talked about performing the Beethoven concerto, and I’m glad we finally found the right time to do it.”

The concerto, written between 1806 and 1807, was composed for Franz Clement and premiered at a benefit concert for the violinist, who is said to have interjected a showpiece of his own between the first and second movements. The work only began to attract attention when it was revived in 1844 by the 12-year-old Joseph Joachim.

“A lot of pieces that we consider cornerstones of the repertory had to wait for some well-established performers to popularize them,” Bendix-Balgley said. “Joachim left such a big mark on music that was written for him, or that he championed. The Beethoven is the most noteworthy example of a great soloist bringing a work to a bigger audience.” 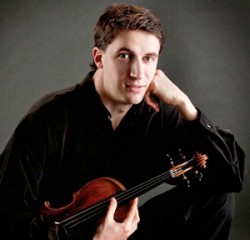 In Cleveland, Bendix-Balgley will be using his customary fiddle, a 1732 Bergonzi instrument, but fitted out with gut strings and a “transitional” bow that falls somewhere between Baroque and modern styles. “The Beethoven concerto was written at an interesting time when modern-style bows were already being produced by builders like Tourte, but people were playing with all sorts of different equipment,” he said.

“This bow is a bit lighter and definitely informs my approach — especially how I choose to articulate the solo part. I really try to play with the original slurring and markings, but Beethoven left a lot to the discretion of the soloist, assuming they would put their own stamp on the part.”

The gut strings will produce a different sound, especially in the upper register, and performing at a slightly lower-than-modern pitch (A=430 hz) will also affect the timbre, Bendix-Balgley said. “This concerto is so much about the interplay between soloist and orchestra, and the size of the orchestra will give the performance more of a chamber music feeling.”

Bendix-Balgley will also add his own stamp to the piece in the form of cadenzas. “They’re the same ones I wrote for my performances in Pittsburgh, although I made some alterations to make them more stylistically appropriate. Still, they’re a bit in the style of Kreisler and Milstein that I like a lot.”

A recent addition to the violinist’s Cleveland schedule is “Noah at Nighttown,” an informal appearance at the Cleveland jazz club on Wednesday, April 26 at 7:30 pm. “I’ll talk about the path to my current life in Berlin, and play some Bach and some Klezmer tunes that have always been part of my musical life,” he said. Bendix-Balgley grew up in Asheville, NC playing Klezmer at an early age, and wrote a Klezmer concerto to perform with the Pittsburgh Symphony.