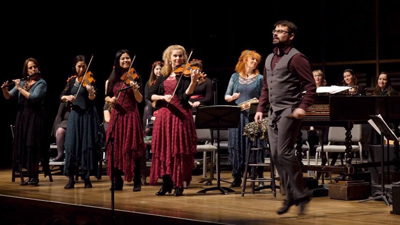 The five sold-out performances of “Christmas on Sugarloaf Mountain” this month attest to the popularity of Apollo’s Fire’s crossover shows. Heard on Saturday, December 9 at First Baptist Church in Shaker Heights, the holiday sequel to “Sugarloaf Mountain: an Appalachian Gathering” was just as alluring and infectious as its predecessor, even if some of its elements were still in the process of settling in.

The printed program was updated with an insert detailing half a dozen changes in the order of pieces, and one deletion — in fact, there seemed to be two. Rather than try to keep track of all the alterations, it was best just to close the program, sit back, and let the show unfold.

Created, written, and arranged by artistic director Jeannette Sorrell, the itinerary that leads from Ireland to a Christmas celebration on Sugarloaf Mountain begins with a prologue, visits a medieval service in “Dublin Cathedral,” pauses to enjoy traditional carols in the British Isles, then emigrates to America for a succession of Christmas tunes in an Appalachian Meeting House and on a plantation, winding up with a Barn Dance.

Individual personalities always illuminate Apollo’s Fire’s productions, and the Christmas edition of “Sugarloaf” enjoyed a roster of strong singer/actors, instrumentalists, and choristers, beginning with Sorrell and her sidekicks, soprano Amanda Powell, tenor Ross Hauck, and soprano Molly Netter. Bass Jeffrey Strauss had to sit out Saturday’s show due to illness, and his solos were parcelled out to others.

Those soloists joined the 14 adult voices of Apollo’s Singers and the 20 young members of Apollo’s Musettes, forming a critical mass of vocal prowess. And the colorful instrumental component included the brilliant violinists Susanna Perry Gilmore, Julie Andrijeski, and Emi Tanabe, and the energetic gambist and cellist René Schiffer. Special colors were contributed by flutist Kathie Stewart, hammered dulcimer player and singer Tina Bergmann, master of plucked instruments Brian Kay, and three pipers: Luke Conklin on the medieval pipes, Ian Crane on the Scottish, and Brian Bigley on the Uilleann model. Bigley doubled as step dancer and Irish flutist, and Conklin covered both medieval and lever harps and briefly tooted on a shawm.

Two festive medieval Nowells and a Gaelic carol represented that service inside the cathedral, while Brian Kay’s arrangement of the medieval lyric Blow, Northern Wind painted the scene outside. The Wexford Carol, a Uilleann pipe tune, and two Wassail songs from Yorkshire and Somerset celebrated the tradition of house-to-house caroling (and begging for alms). Three flutes, hammered dulcimer, and violins accompanied the ocean voyage to America in Kathie Stewart’s arrangement of Ships in Full Sail.

The “Wanderers Under the Sky” section combined the idea of emigration with the wanderings of Joseph and Mary. Introduced by excerpts from the Gospel of Luke and an 1825 letter home from the New World, it included John Jacob Niles’ lovely “collected” carol, I Wonder as I Wander (he probably wrote it himself). Part One ended with our arrival at our “New Mountain Home” with a selection of reels and step dancing.

After intermission, Ross Hauck turned into a preacher — he’s a highly communicative actor as well as a splendid singer. “Christmas at the Meeting House” featured rustic tunes from The Southern Harmony, including a long arrangement of Star in the East with the choir singing — sometimes in solfege — from the side aisles. 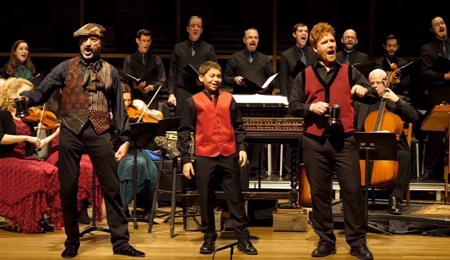 Sixth grader Michael Temesi sweetly intoned the Appalachian tune Jesus Born in Beth’ny, soon joined by the Musettes. After they exited, Amanda Powell shone in a highlight of the evening, the Scots/Appalachian Christ Child’s Lullaby.

A somewhat abrupt transition introduced the African-American tunes Rise up, Shepherd and Follow and Mary Had a Baby, featuring Hauck, Powell, Netter, and the women of Apollo’s Singers in a swinging a cappella moment (the advertised Go Tell It on the Mountain seems to have gotten dropped).

The program ended with “Christmas Barn Dance,” a medley of Scots, Irish, and Old Time tunes culminating in the Appalachian Twelfth Night tradition of “Breaking Up Christmas,” which involved the full cast and more step dancing.

Naturally, a few rough edges remain as they do in any new production. The use of spoken narrative was not consistent, transitions between sections could use some rethinking, and a few historical facts need checking — Dublin has two cathedrals, neither of which probably performed medieval music in 1603 as the narration suggested. But Sorrell’s choice of repertoire, the quality of her arrangements, and the high level of performance that Apollo’s Fire generated made up for any shortcomings. With a bit of tweaking, Christmas can be just as compelling as the rest of the Sugarloaf Mountain experience.

END_OF_DOCUMENT_TOKEN_TO_BE_REPLACED

Franz Welser-Möst led the final bows on Saturday night at Severance, like the star of any show should. The Cleveland Orchestra’s music director is in his element presiding over the ensemble’s annual opera production, which this season packs the drama. Verdi’s Otello — in a concert staging that opened May 21 and runs for two more performances (May 26 and 29) — demands big voices, instrumental forces to match, and a conductor who can give it all shape and direction. END_OF_DOCUMENT_TOKEN_TO_BE_REPLACED

The cimbalom was the feature of the show, an instrument capable of taking on many personas. Its performer, Chester Englander, has shaped his career around the instrument, and has inspired composers to write more repertoire for it, some of which was presented on the program. END_OF_DOCUMENT_TOKEN_TO_BE_REPLACED