The first such video, capturing the October 20 performance of Resilience at First Baptist Church in Shaker Heights, delivered handsomely on that promise. Erica Brenner’s sensitive videography and audio mixing preserved brilliant performances of music that illuminated two troubled periods in history: the plague of London in 1665, and the outbreaks of cholera and dysentery that dampened but failed to defeat the human spirit at the end of the American Civil War two centuries later. 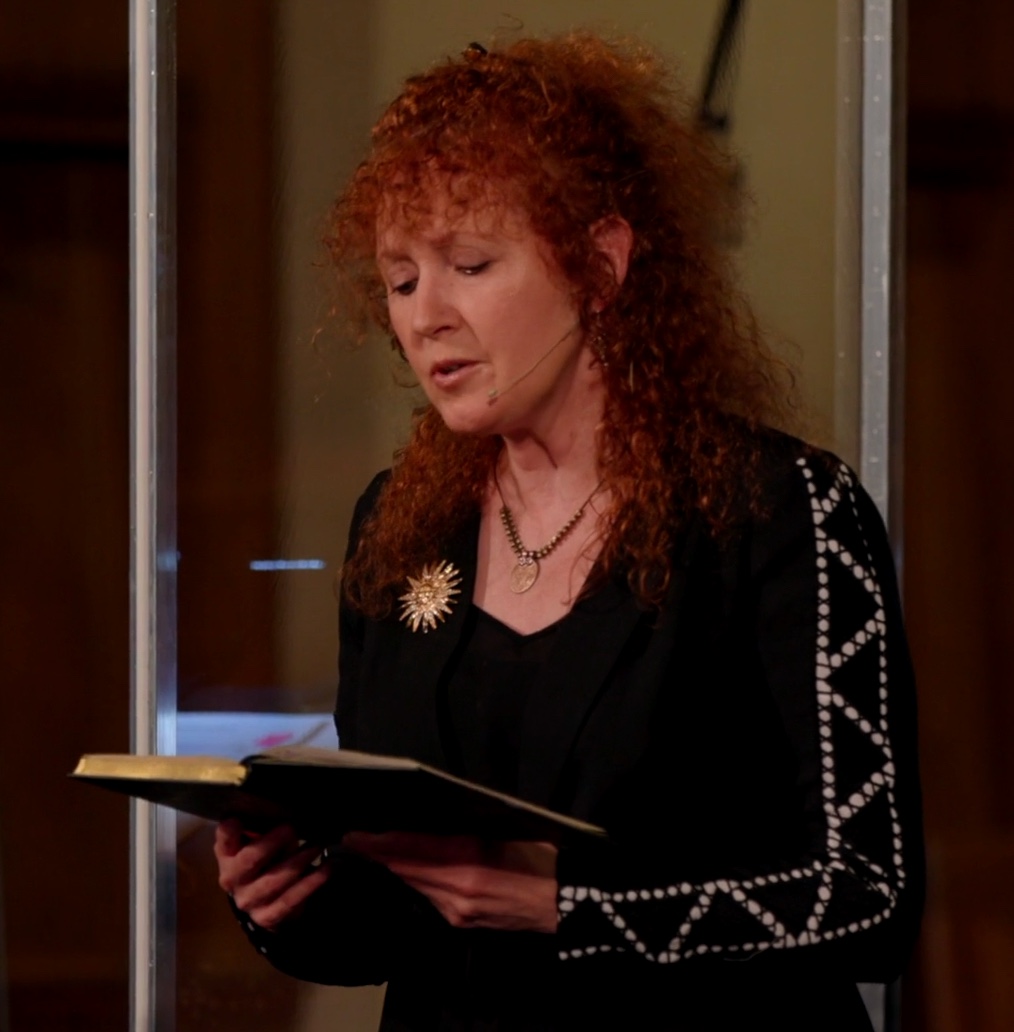 Programs of words and music can make a wonderfully engaging experience, and Jeannette Sorrell chose — and expressively read — excerpts from the writings of Daniel Defoe, Samuel Pepys, Mary Chesnut, Frederick Douglass, Harriet Tubman, and Sojourner Truth during the performance. Those texts alternated with music by Henry Purcell, John Dowland, and Thomas Tomkins, along with Scottish ballads, American folk tunes, spirituals both White and Black, and a Sacred Harp hymn, illustrating human resilience during challenging times.

The video package included a Issu version of the 72-page concert program, and a Zoom lecture by Harvard Professor Thomas Forrest Kelly, who unpacked the history of the music in his signature folksy-scholarly way.

Not every item fell neatly in sync chronologically — Purcell was only six when the plague ravaged London, Dowland had died 40 years earlier, and Tomkins wrote his Sad Pavane for another distracted time, the execution of Charles I in 1649. Never mind. The emotional content of the music rang true to the subject, and the performances were first-rate. 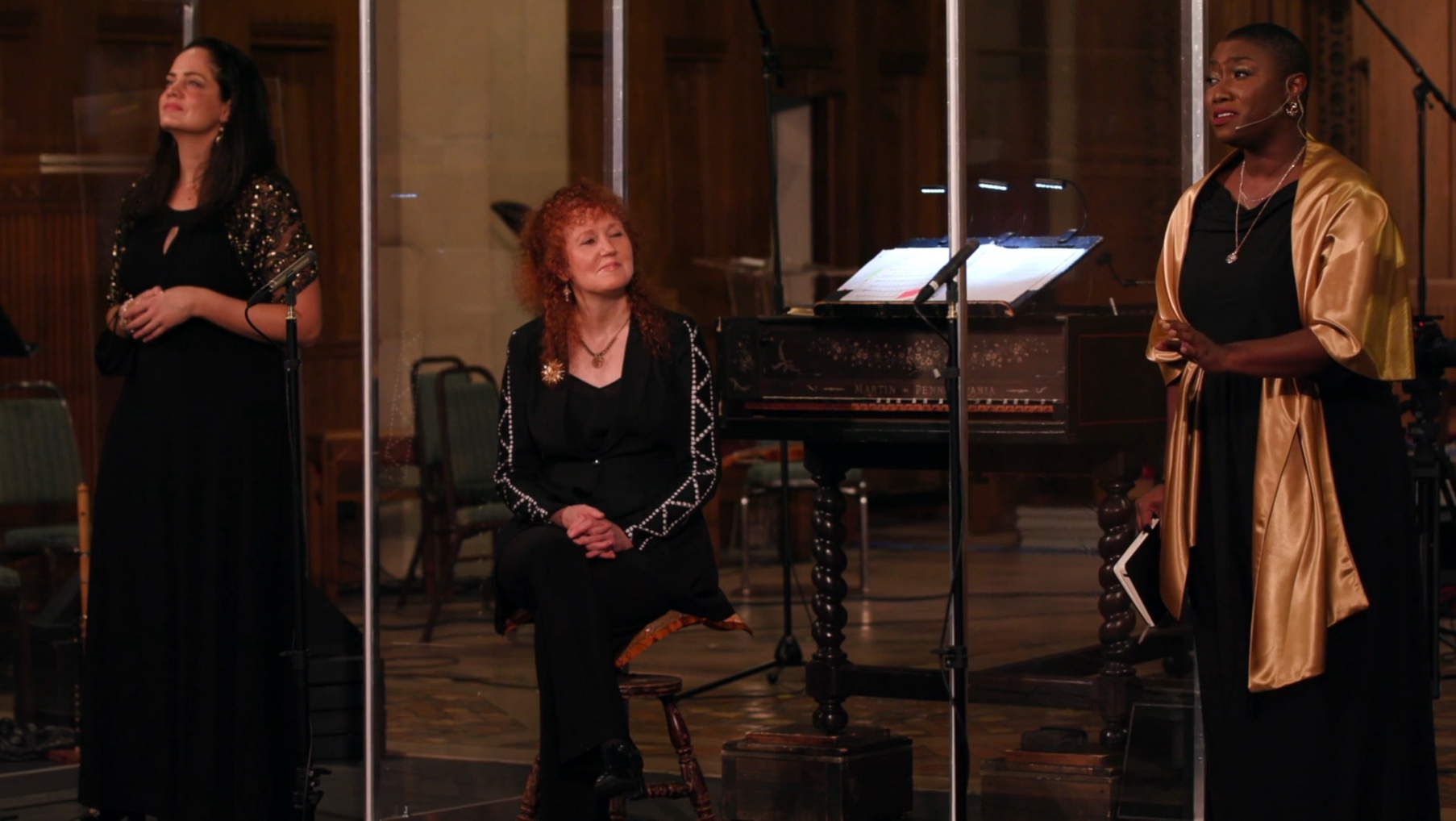 Sopranos Amanda Powell and Ashlee Foreman rang out splendidly from their plexiglass enclosures in “We the spirits of the air” from Purcell’s The Indian Queen, and the instrumental ensemble (violinists Olivier Brault, Susanna Perry Gilmore, and Emi Tanabe, violinist and violist Andrew Fouts, flutist Kathie Stewart, and cellist and gambist Rebecca Landell Reed) delivered spirited performances of Purcell’s Chacony in g and hornpipes from King Arthur. 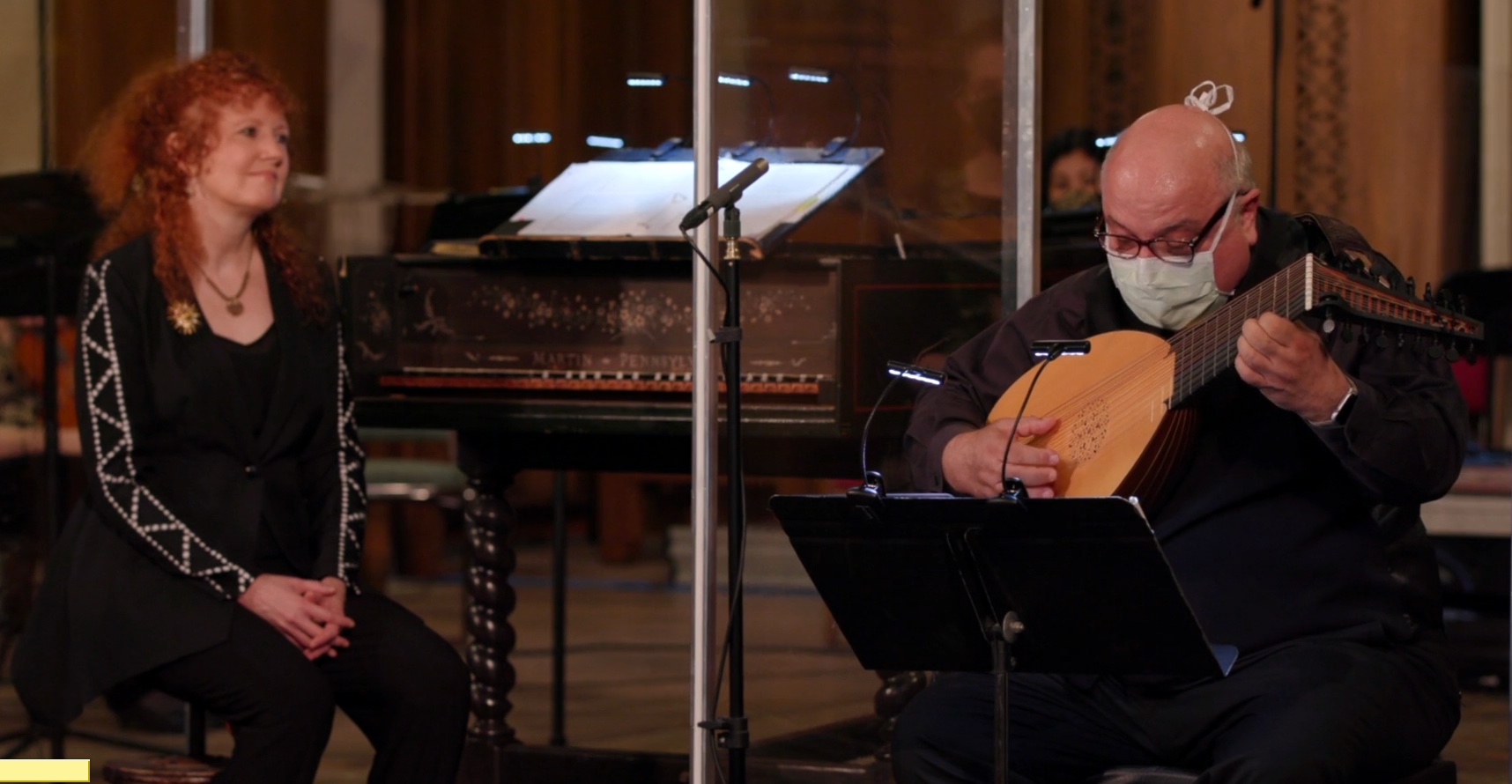 Physician and guest lutenist Daniel Shoskes, introduced with a quotation from a contemporary doctor, added touching performances of Dowland’s Fantasia in a, and Tomkins’ Sad Pavane. Kathie Stewart’s soulful ballad, Wild Geese, was answered by Brian Kay’s affecting singing of If I were a Blackbird, accompanying himself on the lute. Then Kay took up a drum and made a dramatic exit, setting the stage for the British ballad The Death of Queen Jane and Purcell’s Queen Anne Funeral March. 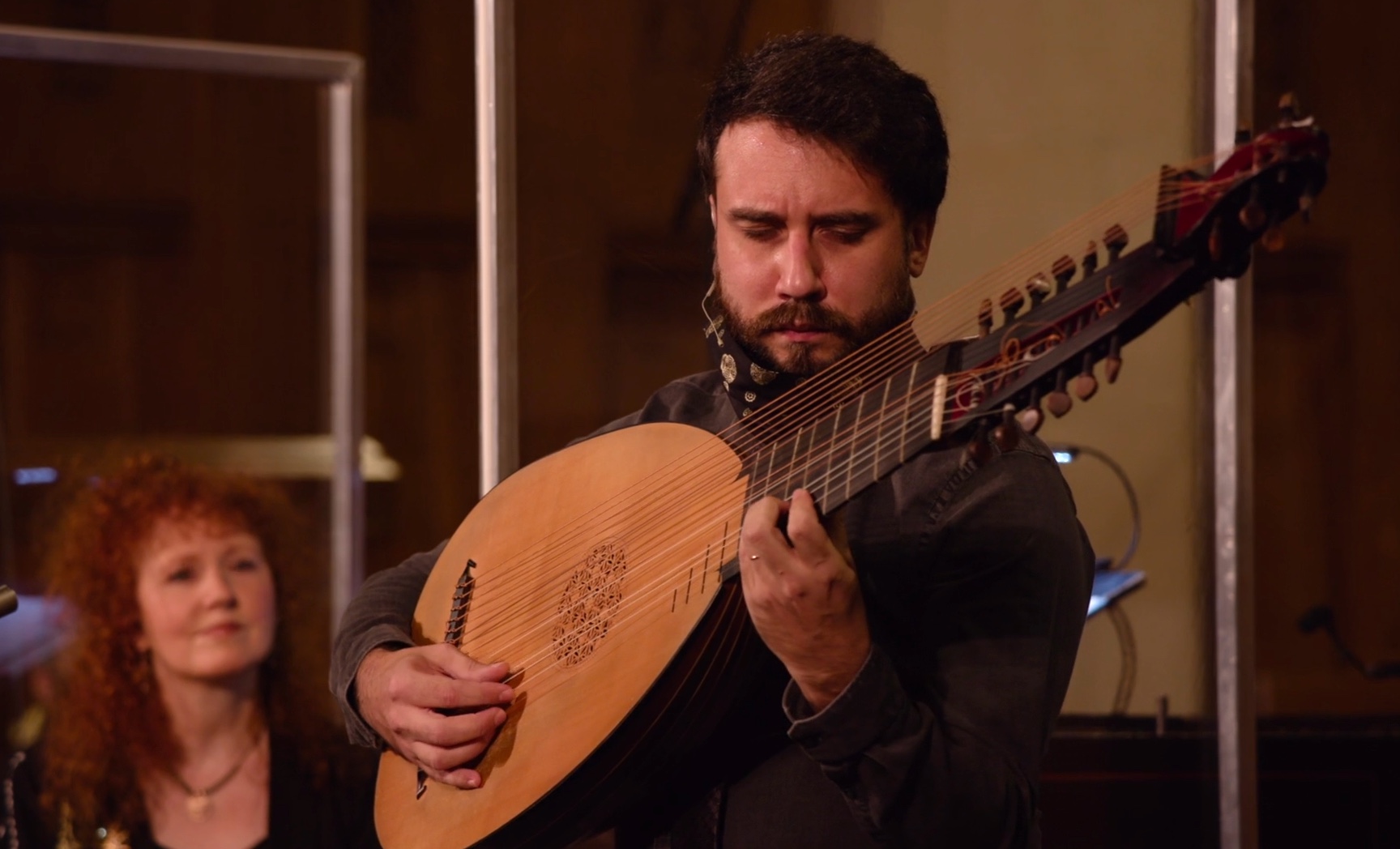 After an intermission interview with Sorrell, Part Two fast forwarded us to the postbellum American South with an “On the Plantation” hoedown featuring the amazing hands of Tina Bergmann on the hammered dulcimer. Instrumentalists became singers for spirituals like Wade in the Water, in an elaborate arrangement. Set 5, “Resilience,” introduced the Shape-note hymn Wondrous Love and ended with Garfield’s Blackberry Blossom/Poplar Bluff, another ebullient ensemble arrangement that featured a wild Bergmann cadenza. 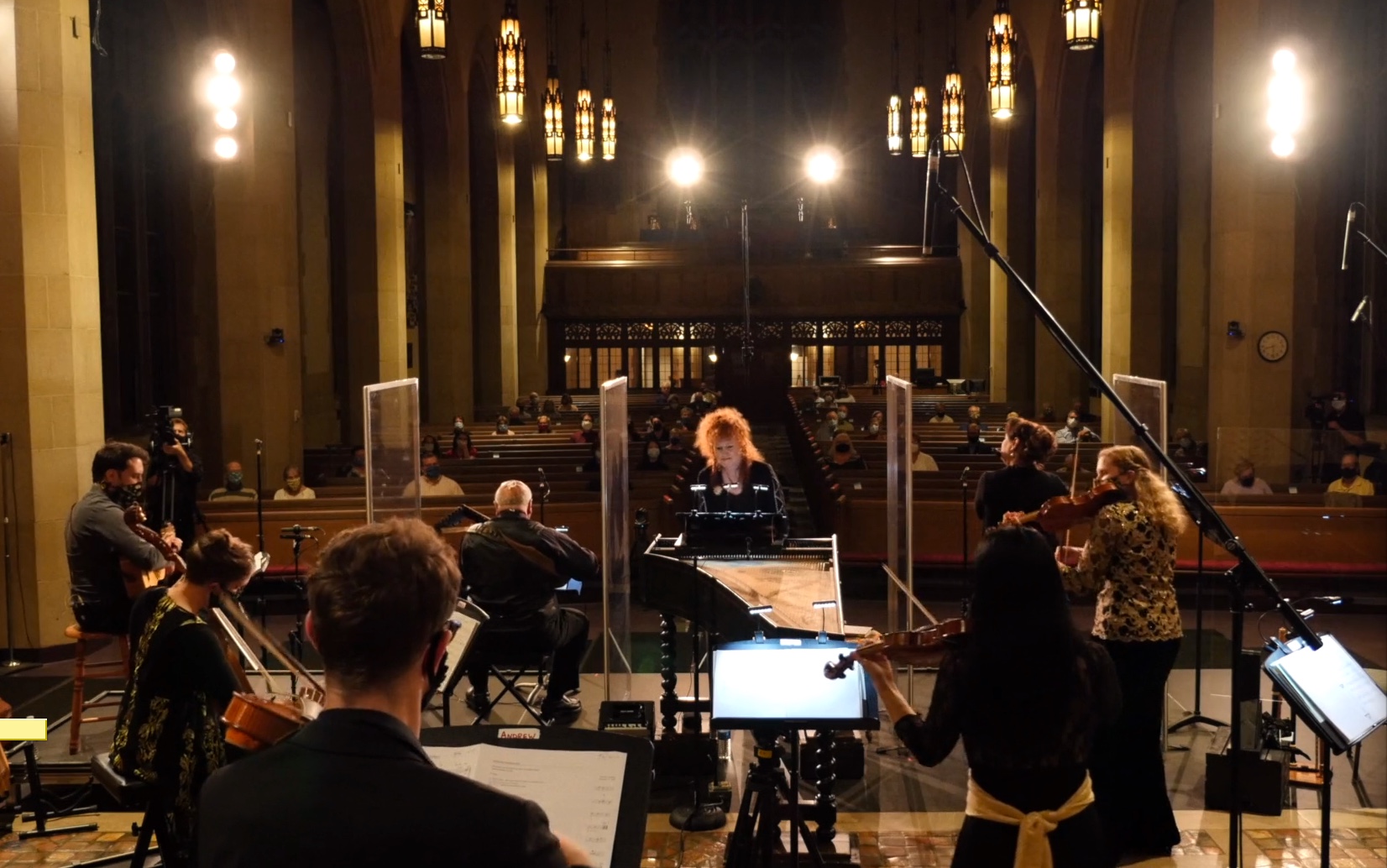 A noisy ovation from the small, restricted, physically distanced crowd called for an encore. Brian Kay led everyone in We Shall Overcome, Sorrel inviting the audience to “hum along behind your masks.”

Watching the video was either the next best thing to being there, or sometimes even better: closeup camera work gave the viewer access to more than a front row seat, and miking allowed quiet instruments like the lutes to sound more robust than you would ever hear them in a space like the nave of First Baptist.

Apollo’s Fire’s “Pilgrimage of Hope” season continues with Allure, Delight, Elegance, Triumph, and Celebration, concerts that promise to crescendo into a more hopeful 2021. They’re off to an impressive start.

END_OF_DOCUMENT_TOKEN_TO_BE_REPLACED

The strings-only work by Berg has made relatively frequent appearances on the Orchestra’s programs. In 2021, the musicians recorded it for the In Focus series, and it appeared again on last year’s European tour. Friday’s rendition maintained the group’s characteristic light and effortless playing, each section blending as much as possible to echo the work’s original form as a string quartet. At fifteen minutes total, the piece is quite short, but the dense encoded musical meanings require some extra-attentive listening. Splitting up the three movements ensured that each one could be appreciated on its own. END_OF_DOCUMENT_TOKEN_TO_BE_REPLACED