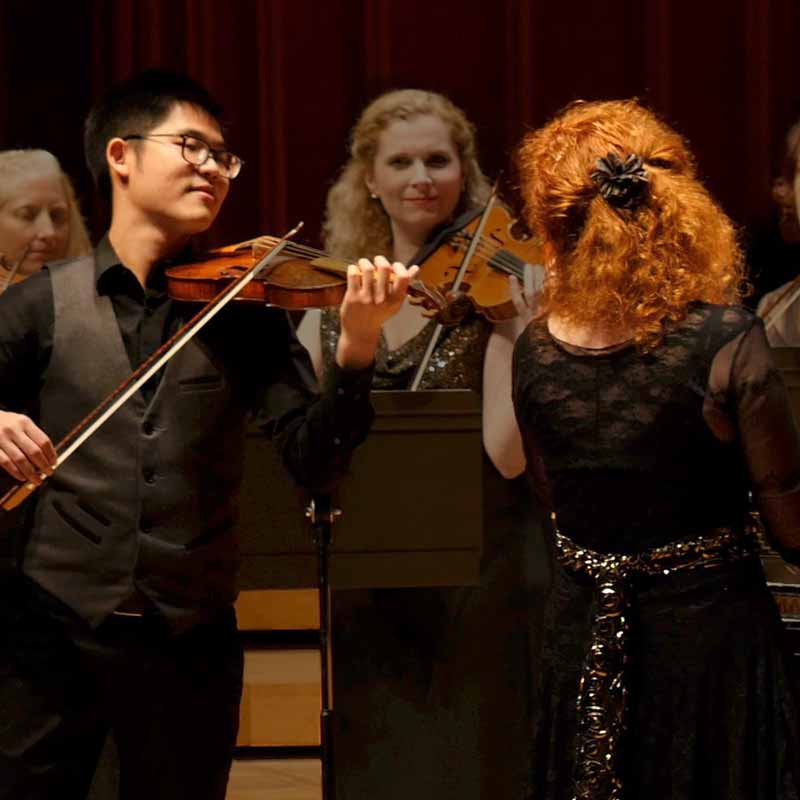 Where did Johann Sebastian Bach come from? What influenced the mature musical style of one of the greatest composers of the Baroque period? Or to put it as co-director and violin soloist Alan Choo does in his recorded introduction to Apollo’s Fire’s Violin Fantasy programs, “Who were Bach’s role models?”

Cleveland’s Baroque Orchestra will set out on a musical journey this weekend to document some of those influences, introducing the Hapsburg composer Johann Schmeltzer (1623-1680), touching base with Heinrich Ignaz Franz Biber (1644-1704) and Johann Pachelbel (1653-1706), investigating the expressive techniques of late 17th-century German composers like Johann Adam Reinken (1643-1722) and Dieterich Buxtehude (1637-1707), and ending with a curious vocal work by a composer half Bach’s age that the Leipzig master thought highly enough of to copy out and slightly alter in 1746.

In a Zoom conversation, Choo said he chose to begin the program with Johann Heinrich Schmelzer’s Sonata Pastorella simply because the piece is so engaging. Having secured the audience’s attention, Choo plans to lead them through the strange and wonderful world of the Stylus Fantasticus, where wild flights of fancy alternate with stricter contrapuntal passages in elaborate rhetorical structures that resemble the parts of formal speeches, or in the representational style, where the violin imitates the sounds of animals.

That will involve tracing the footsteps of the 20-year-old Bach who journeyed on foot 250 miles from Arnstadt to Lübeck to unlock some of Buxtehude’s musical secrets, but will also include hearing more from Biber about the re-tunings or scordatura he uses in 14 of his 16 Mystery Sonatas to produce different types of resonance from the violin. “The second sonata tunes the four strings in two pairs of open fifths — A and E — which produces a brilliant sound in the key of A,” Cho said.

Otherwise, Biber and Johann Pachelbel have contributed drama to this survey by writing in melancholy minor tonalities, and vocalists Rebecca Myers, soprano, and Elisa Sutherland, mezzo-soprano, will bring words to the mix in a Buxtehude duet and six movements from Pergolesi’s Stabat Mater re-texted with words from Psalm 51.

Why Bach wrote Tilge, Höchster, meine Sünden in 1746, a contrafactum of the work that Pergolesi wrote shortly before his death at the age of 26 remains a mystery, and what hearing that work will tell us about Bach’s art remains to be seen. At the least, Apollo’s Fire’s survey of violin music during the composer’s lifetime will identify some trends that became interesting dead-ends as well as some that bent the trajectory of music history.