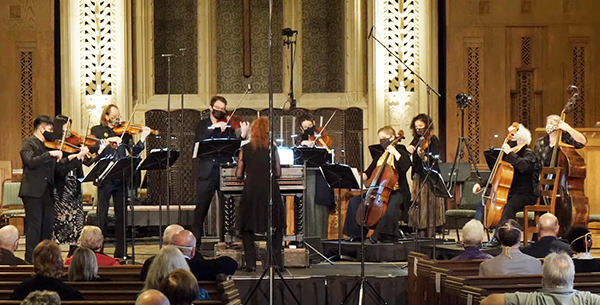 Those “manly virtues” are fully displayed by violinist Alan Choo, trumpeter Steven Marquardt, and their five male colleagues in “Virtuosity: Fireworks from J.S. Bach,” the latest video from Apollo’s Fire. But how to characterize the contributions of soprano Amanda Forsythe, conductor Jeannette Sorrell, and the other seven female performers who shoot off such spectacular musical sparks from the stage? Sure, call them virtuosas, but that doesn’t solve the problem, since the root of the word is Vir, Latin for man.

We’ll leave that question to the linguists, and give a general shout-out to all the musicians whose efforts produced these stellar performances. A violin concerto, a “Brandenburg” concerto, a solo cantata, and two movements from an orchestral suite also validated the compositional virtuosity of Johann Sebastian Bach, whose music is so architecturally sturdy and well-conceived that it thrives through all attempts at arrangement. 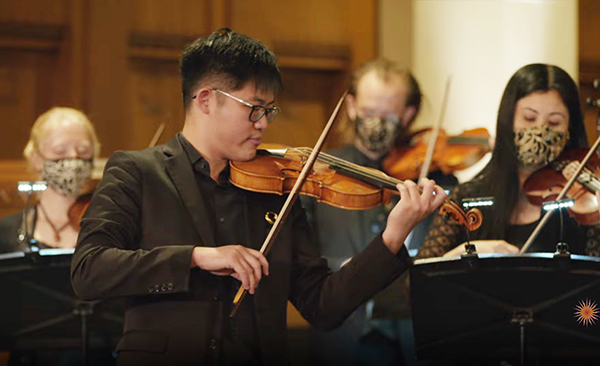 Bach himself frequently repurposed his own music, perhaps none so often as the d-minor Violin Concerto, which reappears as a keyboard concerto and (partially) in a cantata with organ obbligato and added choral parts. The original has gotten lost, but no matter: Alan Choo reconstructed it for this concert and delivers a lively and sonorous performance of the solo part.

An indulgent reading of the Air from the Third Orchestral Suite adds rather too much rubato to the expression Bach already built in, but the Gigue from the same suite is perfectly rollicking.

Bach’s Jauchzet Gott cantata, BWV 51, receives a flawless performance from Forsythe and Marquardt, whose tonal blend nearly makes soprano and clarino interchangeable. Forsythe’s melismas are wonderfully clear, and her breathing techniques — in places where there’s no time to take in air — should be studied and imitated by all Bach vocalists.

The orchestra launches the concert with a lively excursion through the Third “Brandenburg” Concerto. Conducting from the harpsichord, Jeannette Sorrell leads a rather mannered performance of the opening movement, contributes a thoughtful, improvisatory cadenza that includes cross-hand arpeggios and echoes of motives from solo violin and cello, then puts the pedal to the metal for a nearly breathless finale. While Apollo’s Fire adroitly manages the quick tempo, you have to wonder if the socially distanced listeners in the nave of First Baptist heard half the notes that are so clearly captured on the video. 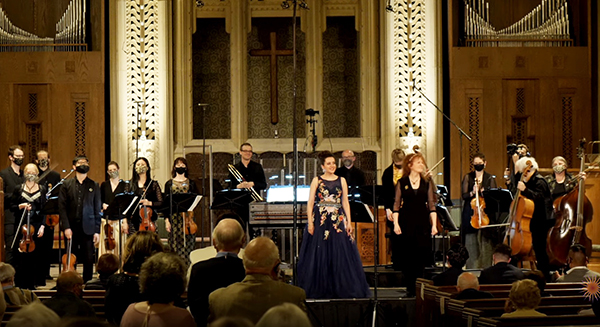