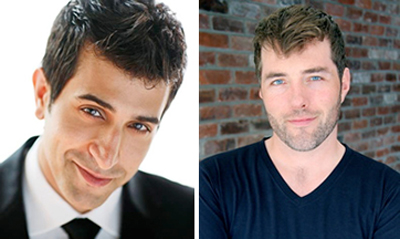 Mercer’s compatriot, tenor Karim Sulayman, agreed. “I speak in hyperbole a lot, but when I talk to my friends who aren’t musicians, I say that it’s probably one of the top five pieces that have been written — ever! It has so much texture and it’s so rewarding for the listener. You need to hear it at least once in your life.”

Beginning this Friday, Akron and Cleveland audiences will have the opportunity to hear Apollo’s Fire under the direction of Jeannette Sorrell in four local performances of Claudio Monteverdi’s great Vespers of 1610.  Then the 37-member ensemble of voices and instrumentalists will take the piece on a nationwide tour.

Oliver Mercer has sung the Monteverdi on numerous occasions, “especially in 2010 when ensembles were celebrating its 400th anniversary. But I was delighted to be invited on this tour. Often you spend a lot of time rehearsing for one or two performances. To be able to do it ten or eleven times is very exciting.”

Karim Sulayman, on the other hand, will be singing the work for the first time this week. “Everybody seems to be shocked that that’s the case,” he said. Mercer is among the incredulous. “It’s unbelievable he’s never done it because it fits his voice so well,” he noted. Does that make it a dream or a nightmare for a first-timer? “For me, it’s a dream,” Sulayman said. “It’s a stunning piece.”

The Vespers is remarkable for its range of musical styles — from plainchant and hymnody to old-style polyphony, to the new, expressive solo style represented by the four “motets” or “concertos” interleaved between the four big psalm settings. Then there are the florid lines given to the two tenors in the “Magnificat”, including striking echo passages where the tenors chase each other with the same melodic lines.

For this cycle of performances, Sulayman will take the lead in tenor duets, followed by Mercer — who will have to decide where to stand to produce the best echo effect. “When I first sang the Vespers as a chorus member in King’s College Chapel at Cambridge,” Mercer said, “I especially remember that the tenor call and response passages created a magical atmosphere. It’s incredible which location actually creates the best results. I imagine we’ll have fun on this tour deciding that.”

Though Sulayman is new to the Monteverdi, the two tenors have sung together frequently, including past performances with Apollo’s Fire. “I like singing with Oliver a lot,” Sulayman said. “We have very different voices but similar stylistic sensibilities. Our voices actually complement each other. We collaborate in a way that our sound can swell in certain places and back off in others. There’s a very symbiotic thing going on.”

Mercer agrees that combining different vocal timbres can add up to interesting results. “Voices interact similarly to the way that personalities interact. Different ones sometimes work very well together. It’s a slippery slope if you try to change the sound of your voice — it’s like trying to be another person.”

Divvying up the “concertos” for these concerts between the two tenors has been a win-win situation. “I had always sung Audi caelum and had been waiting for sixteen years to do Nigra sum,” Mercer said. This time he got his wish. On the other hand, Sulayman is delighted to sing the other piece. “It’s incredible, so dramatic,” Sulayman said. “This grounded earthling crying to heaven, and the way the text plays with the sacred and the secular.”

But both tenors get to enjoy Duo seraphim, an awe-inspiring concerto for two tenors and bass full of complicated vocal runs. “It’s one of the most exciting movements,” Mercer said. “With its cascading suspensions, it never gets old.”

Both singers think that Monteverdi’s Vespers will be a gripping experience for the audience. “It’s such a feast for the ears, I can’t imagine anyone wouldn’t just eat it up,” Sulayman said. “He’s so direct in his writing that listeners respond in a visceral, soulful way. Even though a learned ear would hear more details, anybody who understands the text will react immediately.” Mercer agreed. “Anyone would be impressed and wowed by its colors and textures.”

Click left for a printable copy of this article

END_OF_DOCUMENT_TOKEN_TO_BE_REPLACED

Rodgers & Hammerstein’s Cinderella was originally produced for television in 1957 — seven years after the animated Disney film was released — and starred Julie Andrews. According to the Rodgers & Hammerstein website, it was viewed by over 100 million people. END_OF_DOCUMENT_TOKEN_TO_BE_REPLACED

The story line has its origin in an 1855 play and an 1842 farce that Thornton Wilder mined for his 1938 play The Merchant of Yonkers. When that turned out to be a flop, in 1954 Wilder made the crucial decision to re-center the show around the character of the legendary marriage broker Dolly Gallagher Levi and renamed it The Matchmaker. END_OF_DOCUMENT_TOKEN_TO_BE_REPLACED

The Dodero Center for the Performing Arts at the Gilmore Academy in Gates Mills is one feature of an impressive campus. The auditorium is shallow, the stage is deep, and the ensemble played without a shell. Throughout the program, the sound, especially in instruments’ lower registers, tended to disappear. END_OF_DOCUMENT_TOKEN_TO_BE_REPLACED