I watched the live stream from my home computer. There were a few technical glitches, including titles being displayed for the wrong pieces, but the camera work was clear and varied, with some still photos interspersed from inside the pipe chambers of the four-manual Berghaus organ. The sound was excellent coming through my Sennheiser headphones.

The only selection that came close to being a “standard” was J.S. Bach’s Canonic Variations on “Vom Himmel hoch, da komm’ ich her.” The rest of the program comprised 20th- and 21st-century pieces, several by women composers, and others commissioned by Rakich.

David Arcus’s 2003 Variations on “Besançon” (a French tune often sung to the Advent text, “People look East”) opened the program in a mélange of styles. Some variations are simple, while others are harmonically adventurous. It ends with a stylish fugue and French-style toccata with manual flourishes and melody thundering out in the pedals.

The Christmas-in-October theme continued with Bach’s Vom Himmel hoch variations, one of Bach’s contrapuntal masterpieces. Each one is in the form of a canon. As the variations progress, the canons become increasingly complex and the counterpoint more esoteric. Rakich made these exceedingly difficult movements flow as if they were simple, with well-chosen registrations.

Johanna Senfter (1879-1961) was a favorite pupil of German composer Max Reger. The first of Senfter’s Three Chorale Preludes is also based on Vom Himmel hoch, but in a vastly more Romantic style —  a pastorale in gently rocking triple meter. In dulci jubilo sets the tune in long notes, surrounded by chromatic counterpoint based on each phrase of the Christmas song. The final prelude, Puer natus in Bethlehem, is dense, highly chromatic, and dissonant, at times verging on atonal. 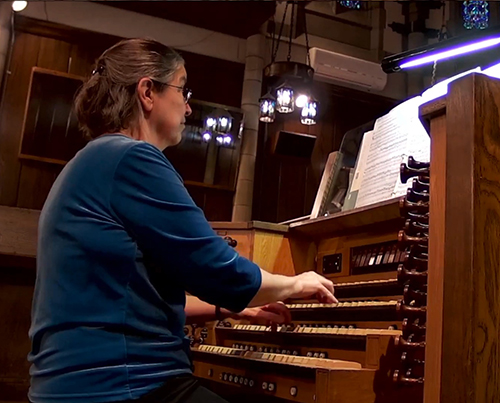 French pedagogue and sometime organist Nadia Boulanger’s Trois piéces (1911) are having “a moment” in Northeast Ohio. After being virtually unknown, they have now received two performances in the last few weeks. (Nicole Keller recently played them in concert at Trinity Cathedral.) I found myself admiring the craftsmanship of these substantial works more than their musical inspiration. They are well-designed, melodic, and the musical materials are thoroughly developed, but despite Rakich’s committed and expert performance, Boulanger’s music itself just never took flight.

The organist contributed her own recent Hommage à Gershwin: Quodlibet on “Slane” to the program. It is a lazy, sensuous mashup of Gershwin’s Porgy and Bess hit “Summertime” and the Irish hymn tune “Slane” (often sung to the words, “Be Thou My Vision”). The dense, lush registration on soft flutes and string stops made for a surreal experience, especially when the “Summertime” melody itself makes an appearance in the second half of the piece. We can assume that the composer gave an authoritative performance.

Margaretha Christina de Jong (b. 1961) was commissioned by Christa Rakich to compose a “Catholic” piece, and the Dutch composer accepted her suggestion of the 11th-century Latin hymn Salve Regina as a theme. In the Fantasia on “Salve Regina,” the tune is freely developed, sometimes deconstructed phrase by phrase. At other times it appears in toto, expressing the voluptuous text in praise of the Virgin Mary. The overall feeling is one of high emotion, expressed within the bounds of modal tonality. The fantasia seemed like a 21st-century counterpart to the chant improvisations of French organist/composer Charles Tournemire. De Jong’s piece deserves to be taken up by other performers.

The concert ended with American composer James Woodman’s 2003 Sonata in Sea: Cape Cod, a delightful three-movement suite depicting scenes on the Massachusetts cape. The shipping port Barnstable is portrayed with bustling movement and officious fanfares. Wellfleet provides a mesmerizing view of the waves lapping on the beach. And Provincetown is represented by a riotous concoction that combines the English Renaissance song “John Come Kiss Me Now” with the sturdy Navy hymn “Eternal Father, Strong to Save.” The juxtaposition of the secular with the staid and sacred was hilarious.

Christa Rakich’s playing throughout the recital was solid and musically satisfying, and her dedication to music of our own time is laudable. With its variety and color, it was the sort of program that was brilliant for a video event — undoubtedly successful in person as well.

Supported by engagingly, yet simple staging by Cara Consilvio, a well-prepared cast of singers told the archetypal story of Cinderella with charm and flair. Framing the production was  a sparse but colorful set and wonderful lighting by Dave Brooks. END_OF_DOCUMENT_TOKEN_TO_BE_REPLACED

END_OF_DOCUMENT_TOKEN_TO_BE_REPLACED

The music isn’t easy to play, either. Over the course of two hours, all of the musicians brought fantastic focus to the unrelenting tricky rhythms and countless layers of parts, all of which require a high level of individual responsibility. Even in the moments of calm, the accompaniment remains perpetually unsettled. Adams — who made a sprightly presence on the podium — combines minimalist, repeating motives in gradual layers, which eventually become so dense they overwhelm the senses. Lisa Wong deserves special mention for her thorough preparation of the Cleveland Orchestra Chorus, as does Jennifer Rozsa for the Children’s Chorus, which made a brief but memorable appearance in the last few minutes. END_OF_DOCUMENT_TOKEN_TO_BE_REPLACED