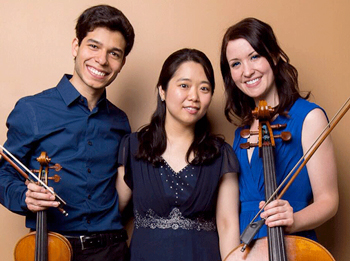 From the opening melody, Beethoven’s “Archduke” trio signals its great-heartedness, brimming with tenderness, longing, and nostalgia. Note-perfect and passionate in their interpretation, the Autana Trio conveyed Beethoven’s soulful warmth, his sudden contrasts of finger-bending fireworks, and his occasional descents into mysterious regions. Especially moving in that latter category were the slithery semitones of the second movement’s trio, and the hushed and delicate transition from the third movement to the boisterous finale.

Beethoven —  himself, of course, a pianist  —  gave great responsibility to the piano part. The talented Yuri Noh more than met the composer’s demands with her brilliance, expression, and power.

Unfortunately, the acoustics in the lovely, high-arched Tremont Pilgrim Congregational Church are tricky, and at many times, I could barely hear the string players, though I was sitting in the fourth row. It might have been advisable to put the piano on a short stick. In quieter passages, the balance was more successful. For the Shostakovich, I moved to the balcony and was pleased to hear that the balance sounded much better, partly as an effect of the sparser scoring of his modernist idiom.

The Autana Trio plays with exceptional rhythmic accuracy, supported by lots of eye-contact among the musicians, and their evident attention to ensemble paid off in Shostakovich’s quirky and demanding trio. In the extensive and episodic first movement, the performers delivered an excellent variety of color and mood. The lightning-fast second movement was dazzling in its manic intensity, setting up a contrast with the third movement, a Largo of almost glacial slowness and solemn austerity. In the fourth movement, that somber music moves into an exciting mode, where it seems almost anything can happen. Whispers and wailing, dancing and duelling: there’s a Hamlet-like zaniness to Shostakovich’s tragicomic finale.

The young trio, who were recently awarded bronze medals in the distinguished Fischoff National Chamber Music Competition, played these imposing masterworks with skill and passion. In both works, their performance emphasized the high seriousness of the music, occasionally at the expense of its latent humor — sometimes ironic, sometimes dark — that can both temper and complement the intensity. I look forward to hearing the Autana again, perhaps in some music of a lighter vein.

The Sunday afternoon audience was enthusiastic, though not large (the sun had finally come out after some days of equinoctial wetness, and I suspect many were taking advantage of some gardening time). A warm welcome to audience and performers was given by the founder and director of Arts Renaissance Tremont, Chris Haff-Paluck. The next concert in the series takes place Sunday, October 25, and will feature recently retired Cleveland Orchestra clarinetist Franklin Cohen and friends.

END_OF_DOCUMENT_TOKEN_TO_BE_REPLACED

Rodgers & Hammerstein’s Cinderella was originally produced for television in 1957 — seven years after the animated Disney film was released — and starred Julie Andrews. According to the Rodgers & Hammerstein website, it was viewed by over 100 million people. END_OF_DOCUMENT_TOKEN_TO_BE_REPLACED

The story line has its origin in an 1855 play and an 1842 farce that Thornton Wilder mined for his 1938 play The Merchant of Yonkers. When that turned out to be a flop, in 1954 Wilder made the crucial decision to re-center the show around the character of the legendary marriage broker Dolly Gallagher Levi and renamed it The Matchmaker. END_OF_DOCUMENT_TOKEN_TO_BE_REPLACED

The Dodero Center for the Performing Arts at the Gilmore Academy in Gates Mills is one feature of an impressive campus. The auditorium is shallow, the stage is deep, and the ensemble played without a shell. Throughout the program, the sound, especially in instruments’ lower registers, tended to disappear. END_OF_DOCUMENT_TOKEN_TO_BE_REPLACED