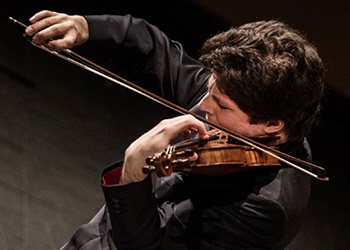 Violinist Augustin Hadelich is no stranger to The Cleveland Orchestra. In July of 2014 he wowed audiences with his performance of the Sibelius Concerto at Blossom Music Center. His August 2017 interpretation of the Dvořák Concerto was a highlight of the Blossom season.

On Thursday, October 17 at 7:30 pm, Hadelich will make his Severance Hall debut with Prokofiev’s Concerto No. 2. The concert, under the direction of the young Finnish conductor Klaus Mäkelä, making his Severance debut as well, will also include Messiaen’s Les Offrande oubliées and Beethoven’s Symphony No. 7. The program will be repeated on Friday, October 18 and Saturday, October 19 at 8:00 pm. Tickets are available online.

Hadelich has always been enjoyable to talk to. But when his performance and travel schedule, along with time zone differences, made a telephone interview impossible, he suggested that I send a few questions by email.

Mike Telin: Please tell me your thoughts on the Prokofiev Concerto.

Augustin Hadelich: It is one of the most exciting and beloved violin works of the 20th century. Prokofiev was a storyteller, and this piece contains just about every character, from the lyrical and pastoral to the manic. It’s hard to resist imagining stories when hearing it. There are even some parts in the first movement that sound a bit like witches riding around on broomsticks!

My favorite moment is the opening of the second movement, where a sweet, singing theme slowly unfolds in the solo violin — it goes straight to your heart.

Prokofiev wrote part of the piece while he was in Spain, which is perhaps why he thought of using castanets in the rambunctious last movement. He had a great sense of humor — every time the violin plays the theme of the last movement, it becomes wilder and more outrageous. The castanets are added, the rhythm is shifted, until it finally arrives in a different key, in G, the “home key” of the whole concerto with all the bells and whistles, almost like a circus. From there the concerto is driven to the end with an insistent 5/4 rhythm in the timpani. Although it is not a particularly fast ending, it is one of the most heart-pounding in the violin repertoire.

MT: Have you had the opportunity to work with Klaus Mäkelä before?

AH: This will be our first collaboration together!

MT: This is going to be your Severance Hall debut. Is there anything in particular that excites you about playing there?

AH: I have rehearsed in the hall before (prior to concerts that I played with The Cleveland Orchestra at Blossom in the past), so I already know that it has a beautiful acoustic and I can’t wait to perform there. Even if you have a great instrument (and I’m lucky to play on a beautiful 1723 Stradivari), the concert hall is a bit like a second instrument. It’s a wonderful feeling to get the sense that the hall is supporting and carrying your sound.

MT: I enjoyed reading your first blogpost for Strings Magazine. You have an engaging style. Do you enjoy writing? What do you want readers to take away from reading your posts?

AH: Once I start writing, it often tends to get way too long — so there are two parts that are hard for me: getting started, and then cutting it down to the right size. But I do enjoy it, and usually write my own liner notes for my recordings.

The idea of the blogpost series for Strings Magazine is to give a glimpse of my touring life. I did choose four of the most exciting weeks of the whole year for doing this blog series, since this fall I’m playing in Boston, New York, London, and Cleveland all within one month — so the final installment will be after my concerts in Cleveland. Much of it is my thoughts about the pieces, about what it’s like to perform the same piece night after night, about traveling (in the third installment, since I was in Europe and a bit jet-lagged), and whatever else comes to my mind.

MT: The last time we spoke, you had just released Nicolò Paganini: 24 Caprices for solo violin, as well as the great video Fantasia dei Gatti. I know cartoons are difficult to make — do you plan to do more in the future?

AH: It took a very long time — about four years, once I had the basic concept. But I was lucky to have some amazing collaborators in Tamarind King and Paul Glickman, who made the animation and story.

The final video is only six minutes long, so I do get asked when there’ll be a sequel. I’m not sure yet! But it was a lot of fun to work on it, and enormously satisfying when it was finally finished.

“Mary’s Song” refers to the Magnificat (“My soul doth magnify the Lord”), sung by the soon-to-be mother of Jesus in response to the message the angel Gabriel delivered to her in the Gospel according to Luke. The text has been set countless times by composers in all eras, largely because the Magnificat is one of the invariable texts in the daily service of Vespers, as well as its Anglican relative, Choral Evensong. END_OF_DOCUMENT_TOKEN_TO_BE_REPLACED

Music director and conductor Daniel Meyer built his playlist around Cleveland themes and scenes. “Exploration CLE” made use of engaging selections from the classical canon and beyond that celebrated “what makes Cleveland so special.” Happily, he and his musicians avoided constructing a visual slide show, choosing to let the music speak for itself. END_OF_DOCUMENT_TOKEN_TO_BE_REPLACED

You could see the relationship at work on a practical level. Repertoire for two players at the same piano requires a certain choreography. There’s just one of each pedal to share, and the hand crossings left and right — which can be so fun to watch a soloist pull off — get more complicated when another person’s involved. At times, Pompa-Baldi drew a hand away from the keyboard and into his body, making room for Friscioni, and at the close of a few delicate phrases, the two were crouched together over the same final notes at one end of the instrument. END_OF_DOCUMENT_TOKEN_TO_BE_REPLACED