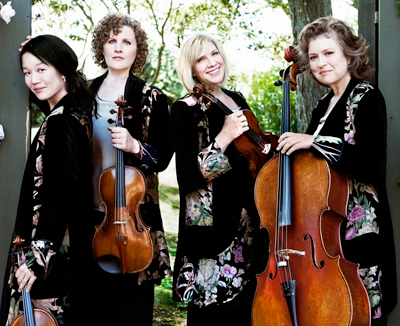 When you walk into their studio, home of the Cavani’s Intensive Quartet Seminar program at CIM, you immediately understand why they have been a source of inspiration to so many young musicians. It’s a fairly large space, and in spite of the fact that there are no windows, it’s bright and cheery with its colorful, poster-covered walls. The perfect environment for honing one’s chamber music skills.

At the far corner of the studio sits a large chest of drawers. “Show him what’s in the drawer,” one of them says, laughing. “Let’s see,” Merry Peckham exclaims, producing two umbrellas, a coffee mug, the Annie wig and a bear hat. There’s also a bow case that no one claims, and a couple of folding music stands. “These are coaching accessories,” Peckham tells me, adding, “wait, these are nice stands, why are they in here?” The drawer also houses a number of packages of photographs of family and friends.

Although the banter initially appears like goofing around, it quickly becomes apparent that this is a quartet of dedicated teachers who are honored to be in residence at CIM and to have such talented students. They clearly see the IQS training as being beneficial in ways that extend well beyond quartet playing. The process of thinking about how to talk to an audience about music, as well as learning to work in groups and to solve problems, will be helpful no matter what career path students eventually take. The program also prepares young musicians to be advocates for classical music and music education.

Mari Sato underscores these philosophies. “My husband is a doctor who studied music, and he often talks about the fact that many people in his field like to see applicants who have studied music. People who have are used to working hard, they have to be well-structured, and they are used to delayed gratification. It’s interesting because I never thought of it like that before. But yes, we put in a lot of hours before getting onstage to perform.” Kirsten Docter adds perspective to the term “delayed gratification.” “I would say that we spend a minimum of one hour of rehearsal time per minute of music before we play it for the first time.” The one-hour-per-minute rule is something the quartet instills in their students.

Sato, who joined the quartet in 1995, feels that as a CIM alum, she is very lucky to have been asked to join the ranks of her former coaches. “I had the wonderful experience of knowing them already, although that was as a student. I was part of the Intensive Quartet Seminar, so I had an insider’s look at what I was going to be doing. But doing it as a member of the quartet was a very special opportunity.”

Sato was in her first year of graduate school at the University of Michigan when she received a phone call from her former teachers asking her if she might be interested in auditioning for the position. “I was in the kitchen,” Sato recalls. “I thought they just wanted to suggest a summer program to look at. Since this was the last thing I expected, I told them that I needed to sit down, so I sat — on the floor.” As Annie Fullard remembers, “We really thought she might have passed out, because there was dead silence.”

Sato remembers the audition process as being a very pleasant one. “It was all about playing music together, and the social aspect of enjoying a meal where they explained what it is that they do. I did have a little bit of an idea but certainly not a complete picture of all that it entailed.”

What was it about Sato that convinced them she was the right person for the job? “Everything,” Docter says quickly. “And that was before we knew she was a great salad dressing maker, too.” According to Peckham, Sato was high on their short-list of potential candidates. “I remember her as a student at CIM. She did everything splendidly. I think she did have some hesitations about taking the job. Teaching is so much of what we do, and I don’t think she was sure she would be comfortable with all that it entails. Of course, she ended up being one of the greatest educators I’ve ever met.”

Docter’s route to joining the group in 1993 was slightly different. “We connected to Kirsten in such a beautiful way,” Fullard says. “Our former violist was the one who found her.” An Oberlin alum, Docter was in her first year of graduate school at Curtis when she was invited to join the group. And like Sato, the teaching aspect was an initial concern her. “Mari and I were both very young when we joined the quartet, but thinking back, I feel it was really a continuation of my schooling for the first few years. Not only was I learning all of the music, but more that that, I was learning from Annie and Merry about teaching.”

Listening to the Cavani talk about teaching is heartwarming. “The experiences that we had with our teachers taught us that love motivates way more than fear,” says Fullard. “I think that approach is evident in the success of our students in terms of their careers and their own happiness. They always come back and say that their lives are all about the passion for music and creativity, as well as understanding how to treat others.”

What do they learn from the students? “A lot,” Docter says, without hesitation. “As I get older, I learn more and more from them. We are also fortunate to have wonderful colleagues here, Peter Salaff particularly, as well as great people who come in to give master classes. I love performing and I hope it’s always part of what I do, but when I really think about the lasting impact, it’s about the students. And that’s what is everlasting. It’s really important and really rewarding.”

“Whenever I’m coaching a group I always think, wow, we’re lucky to do what we do,” Sato adds. “An hour always disappears so quickly. I love learning the music in a deeper way together with the students. And by hearing it in multiple repetitions and having the score in front of me, I get to be a student, too.”

The Cavani also enjoy being part of the cultural fabric of Cleveland. “But it’s not just us, our families have also committed to living in this community,” Fullard points out. “In terms of education, culture, sports, and nature, Cleveland is fantastic, and I’m glad that the rest of the world is starting to see it as a little gem.” Peckham adds, “And we have really great food. You can have a great evening out in every way.”

Mari Sato has the last word. “We are lucky that Cleveland has such a vibrant cultural scene. Who knows what it would be like if we were in a different setting where we were the only arts offering? But I agree with Annie. Here, we can continue to renew ourselves through other things in the city, whether those be musical, other arts organizations, food, or sports. We are very lucky to have been dealt a nice hand for sustainability.”

In the third and final article, the Cavani will discuss their philosophies on rehearsing. We’ll also hear from some of their current and former students.

END_OF_DOCUMENT_TOKEN_TO_BE_REPLACED

Supported by engagingly, yet simple staging by Cara Consilvio, a well-prepared cast of singers told the archetypal story of Cinderella with charm and flair. Framing the production was  a sparse but colorful set and wonderful lighting by Dave Brooks. END_OF_DOCUMENT_TOKEN_TO_BE_REPLACED