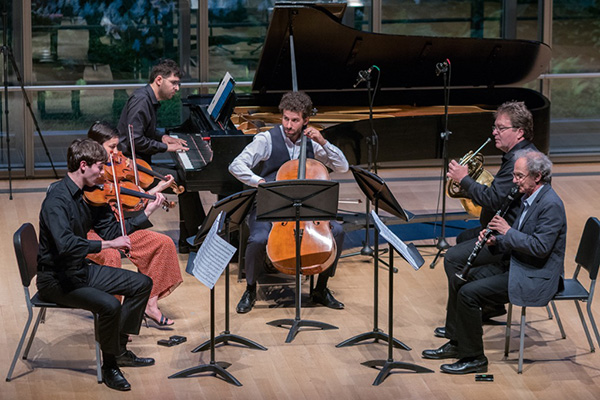 ChamberFest Cleveland patrons will be thrilled to learn that the popular early summer concert series founded in 2012 by Diana and Franklin Cohen won’t be completely missing in action this year due to the pandemic.

In lieu of its ninth season of live performances, ChamberFest is collaborating with WCLV to broadcast nine programs from its high-quality concert archives. The performances, which draw on material from all eight festival seasons, will be broadcast on the station’s Wednesday evening “Ovations” Series on June 24, August 5, and August 12 from 8:00 to 10:00 pm, and in a series of six, one-hour Sunday evening broadcasts from June 28 through August 2, all at 8:00 pm.

WCLV co-founder Robert Conrad will host and produce the series, which will include performances that have never gone out over the airwaves before.

We’ll share more information about the broadcasts next week. Meanwhile, here’s the schedule as it stands now, subject to change.

The cimbalom was the feature of the show, an instrument capable of taking on many personas. Its performer, Chester Englander, has shaped his career around the instrument, and has inspired composers to write more repertoire for it, some of which was presented on the program. END_OF_DOCUMENT_TOKEN_TO_BE_REPLACED

You wouldn’t expect that acoustic from a glance at the nave, which is wide and long, but not especially lofty. But when I guest conducted a local amateur choir and professional orchestra in Beethoven’s Mass in C there a few years back, during the first rehearsal we released the final chord of the “Gloria” and listened in astonishment for the next several seconds. The sound continued to roll down the space like the big wave that surfers dream about. END_OF_DOCUMENT_TOKEN_TO_BE_REPLACED