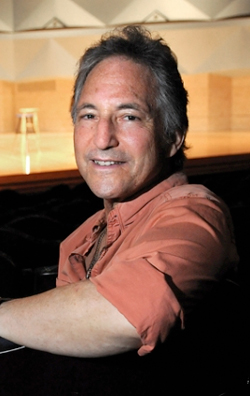 Cleveland Chamber Choir founding artistic director Scott MacPherson will lead his expanded chorus and the BlueWater Chamber Orchestra in the world premiere of Sam Guarnaccia’s Emergent Universe Oratorio at the Maltz Performing Arts Center at Case Western Reserve University on Friday, June 30 at 7:30 pm. Designed to underline humanity’s responsibility to protect and preserve planet Earth, the work relates the scientific story of the journey of the Universe from the Big Bang to the emergence of the evolutionary force of human consciousness.

The new work will be performed in conjunction with a congress of the World Union of Jesuit Alumni at John Carroll University — held every four years but meeting in North America for the first time since its founding in 1956. I spoke recently by conference call with Guarnaccia (in Middlebury, Vermont) and MacPherson (in Kent) and began by asking the composer what inspired him to write the new work.

“The global environmental crisis was the original impetus. I wondered why there    weren’t operas or other cultural responses to this moment when the entire planet is at stake. I began to work with my wife, Paula, and other artists,” he said, “and the idea of an oratorio flowed out of that.”

MacPherson noted that before coming to Kent State University, he had taught a course in music, poetry, and war. “The arts are great at responding to horrible events. But we need more artists to foresee possible outcomes if we don’t take action, and do important things about that. People are not writing a lot of oratorio, but Sam has taken this centuries-old genre and brought it to life with his message.”

Another impetus for Guarnaccia’s mission was the Emmy Award-Winning documentary Journey of the Universe: an Epic Story of Cosmic, Earth, and Human Transformation, written by Brian Thomas Swimme and Mary Evelyn Tucker. “Leverage points of transformation are worldviews, stories that shape our concept of reality and meaning. The emergence of life and human consciousness are things to be celebrated,” he said. “The Montessori Schools have developed initiatives in cosmic education so children can learn that when the great Supernova first-generation stars exploded, they literally gave their lives, spewing out into the Universe the stardust from which our bodies are made.”

Guarnaccia had completed an early version of his Oratorio before a number of events converged to bring it to Cleveland in an expanded format. When the World Union of Jesuit Alumni decided to hold their 2017 congress here, a society devoted to the famous Jesuit priest and scientist Teilhard de Chardin contemplated commissioning a cultural work that would combine theology and science in a powerful way. “When they discovered that such a piece had already been written, it became somewhat easier to develop the project,” Guarnaccia said.

Guarnaccia made contact with Carlton Woods, and once BlueWater Chamber Orchestra was onboard, the composer asked one of his Middlebury colleagues about choral contacts in Cleveland. That quest that led him to Scott MacPherson and his newly-formed Cleveland Chamber Choir.

“Carlton called me last fall right after school started,” MacPherson said. “I saw an incomplete score and decided I wanted to do it. When Carlton had to back out of the project due to failing health, he asked me to take over. We never met, but we felt like kindred spirits.” (Woods passed away in February, but not before lining MacPherson and his Chamber Choir up for a joint concert in the spring of 2018.)

What style has Guarnaccia used for Emergent Universe? “The piece is very tonal, but somewhat experimental and restless. There are seven choral movements and eight recitatives that carry the narrative,” the composer said, adding that he has tried to reverse the trend in music that favors the intellectual.

MacPherson noted that Guarnaccia has chosen chordal structures that sometimes relate to each other, but are not always predictable or intuitive. “He drew inspiration from the words from the very beginning, and in addition to texts by Sam and his wife and two colleagues, there are passages by Gerard Manley Hopkins, Thomas Barry, Rainer Maria Rilke, and William Blake. There’s a strong melodic sense and the music is always moving. I have to say that it feels very cosmic — and emergent.”

In keeping with the nature of oratorio, Vermont musician Tim Guiles will act as narrator, speaking accompanied recitatives to rhythms written in the score. Five soloists — soprano Lara Troyer, mezzo-soprano Megan Thompson, alto Kimberly Lauritsen, tenor Corey Shotwell, and bass Ronald Hazelett — will come out of the chorus. “Hazelett is the most amazing bass I’ve ever heard,” MacPherson said, “which is a good thing, because Sam has written him a lot of low E-flats and a low C.”

The performance will also feature visual art. Vermont oil painter Cameron Davis, who will attend the concert, was inspired by Guarnaccia’s Oratorio to create her “Endless Spring,” a series of paintings that will be on display on June 30.

Jackson began the program with a recitation of Langston Hughes’ poem “Helen Keller” — the first of five poems by Hughes that served as interludes between each piece on the first half. END_OF_DOCUMENT_TOKEN_TO_BE_REPLACED

Pianos with pins and tape on strings, a bass drum and tam tam, crotales, Almglocken, and vibes. Microphones were hooked up all around the instruments. The feed was sent to speakers around the room. Lighting designer Nicholas Houfek hung incandescent globes over the arrangement of instruments from thin black wires stretching across the beams. END_OF_DOCUMENT_TOKEN_TO_BE_REPLACED

From the podium, Elim Chan set an ambitious tone for the evening. The rising star conductor, here in her Cleveland Orchestra debut, has a commanding style, and every twist and turn in Saturday’s performance tracked closely with her baton. END_OF_DOCUMENT_TOKEN_TO_BE_REPLACED