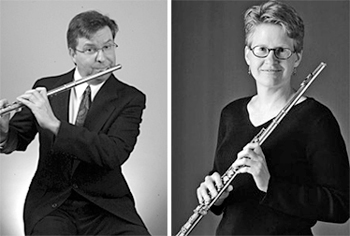 On Saturday, November 14, BlueWater Chamber Orchestra presented a program at Plymouth Church in Shaker Heights that could be described as a showcase for some of Cleveland’s most talented musicians. Led by founder and conductor Carlton Woods, the ensemble performed three sublime and challenging works by Gabriel Fauré, Giuseppe Maria Cambini, and Francis Poulenc. These high-energy pieces, calling for technical bravado and some for lush romanticism, seemed to be joined at the hip, and made for an evening that was both serene and breathtakingly beautiful.

BlueWater opened with Gabriel Fauré’s Masques et Bergamasques, Op. 112, a suite drawn from a one-act divertissement first performed in 1919 in Monte Carlo. The orchestra’s attention to detail was obvious. Melodies flowed with an effortless serenity that only Fauré could have envisioned. The overture opened with a whimsical string motif, quickly followed by a carefree passage that blended flowing melodic lines with shorter, spirited motifs. A marvelous clarinet duet opened the Menuet, advancing into the bouncing tempos and flair of the Gavotte. The fourth-movement Pastorale combined strings, harp, and winds into a wholesome ensemble.

Giuseppe Maria Cambini’s Symphonie Concertante in D featured flutists Linda White and Sean Gabriel. After arriving in Paris in the 1770s, the Italian-born composer realized early on that his success with the Parisian public lay in exploiting the popularity of the latest instrumental “craze,” the symphonie concertante, a symphony employing two or more solo instruments. (He wrote 82 of them.)

Cambini’s two-movement work features flowing yet crisp lines, charming dance-like motifs, and copious technical obstacles that showed off the impressive virtuosity of Gabriel and White. Tempos were exceedingly quick, and the soloists’ fingers flew through sixteenth-note and triplet runs that left the audience breathless. Yet they played with an alluring ease and confidence.

Last on the program was Poulenc’s Sinfonietta, a big work that belies its title. At nearly a half-hour in length and in four solidly-built movements, it’s one of the composer’s longest orchestral works. BlueWater played it with an appealing blend of the hard-edged and the yielding, giving each movement its own distinct personality and color. Special praise goes out to concertmaster Ken Johnston, cellist Kent Collier, and clarinetist Amitai Vardi.

END_OF_DOCUMENT_TOKEN_TO_BE_REPLACED

It was with a sense of relief and anticipation that I attended last Thursday’s third-to-last concert of ChamberFest Cleveland 2021, after a complete pandemic cancellation of its 2020 season. This musical star of Cleveland summers returned along with many performers from past seasons, plus talented younger musicians in CFC’s Rising Star program. As usual, the performances were top-notch. END_OF_DOCUMENT_TOKEN_TO_BE_REPLACED

Though there was no audience in the room, the energy was palpable as the musicians of the Local 4 Music Fund’s She Scores concert series came together on Sunday for an afternoon of music at the Pilgrim UCC. END_OF_DOCUMENT_TOKEN_TO_BE_REPLACED