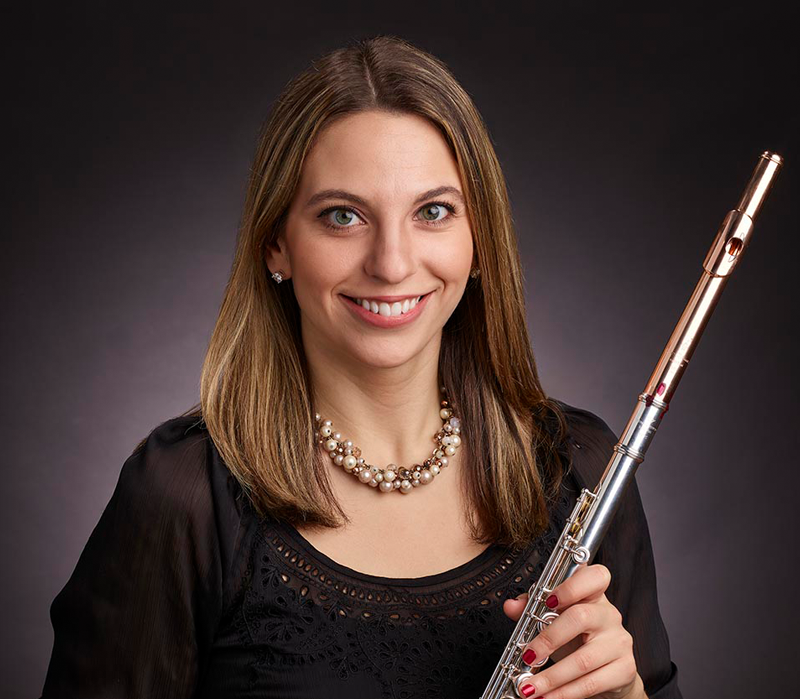 In that position, she often finds herself playing the principal part on concertos featuring the week’s soloist. On Saturday, May 7 at 7:30 pm at Church of the Covenant, Sindell will move to the front of the stage when she performs Mozart’s Flute Concerto in D with BlueWater Chamber Orchestra under the direction of Daniel Meyer.

The program, “Taking Flight,” also includes Hilary Tann’s With the Heather and Small Birds and Beethoven’s Symphony No. 2. At 7:00 pm George Leggiero will play a prelude on the McGaffin Carillon. Pay what you wish. Click here to reserve tickets.

“I’ve played concertos a handful of times, but for the past ten years I didn’t really have the time to commit to playing them,” Sindell said during a recent interview. “I’m so excited to play with BlueWater. I haven’t worked with Daniel but we’ve been in communication, and I’ve heard great things about him and the orchestra, so I’m looking forward to it.”

When it came to selecting a concerto, Sindell said that the decision was left up to her. “Daniel was very open to suggestions and I was able to choose, which was really cool,” she said.

So the question is, why did she go with the D-major? “I know the G-major, and this will be the first time I’ve performed this one. But I thought, I’m a professor now” — she teaches at the Cleveland Institute of Music — “and my students bring me this concerto. Since I have to teach it, the best way to do that is to have my own experience with the piece. And besides, it’s fun.”

Mozart wrote his two flute concertos and three flute quartets on commission from Dutch amateur flutist Ferdinand de Jean. “With this commission, Mozart was supposed to write three concertos and four quartets,” Sindell noted. “I’ve heard different stories, but I understand that Mozart wrote letters to his father saying how he was dreading writing for the flute — and for an amateur. He wrote the G-major concerto, and I think he was pressed for time, so he just transcribed his oboe concerto for flute and he never wrote the third concerto. He only got a portion of the fee, but he did write these three awesome flute quartets.”

The flutist said that Mozart was “a comical guy,” and that side of him can be heard in this piece. “It’s fun to see where he’s working in that humor. There’s so much call and response between the solo part and the orchestra. It’s like a little child at play. It’s also very operatic — there are some Magic Flute moments.”

During our conversation it was clear that the opportunities that The Cleveland Orchestra presented her as a young musician were very meaningful. “Being in COYO was amazing,” she said. “It was awesome working with James Gaffigan and Jayce Ogren. And it’s funny that I’m now coaching the COYO members.”

Sindell also studied with members of the Cleveland flute section, including longtime second flutist Martha Arrons. She also studied with two musicians who are now her colleagues. “I love my section,” she said. “Joshua [Smith] is great and Saeran [St. Christopher] was one of my first teachers when she was still a student at CIM. I also studied with Mary Kay [Fink] quite a bit.”

After high school, Sindell went on to attend the Eastman School of Music. Prior to her Cleveland appointment, she served as the solo piccolo player of the Rochester Philharmonic Orchestra and principal flute of the Oregon Symphony. Still, things were not always easy. Her musical journey is beautifully documented in the orchestra’s podcast series On a Personal Note.

“And this is an open thing, but I didn’t get tenure in Oregon — it was lack of experience. So I use that and tell them to take every opportunity that they have to play all the repertoire. I tell them, ‘You’re surrounded by great people — play as much as you can and make all of your mistakes here. Don’t be afraid to just go for it because it always feels better the second time around.’ I tell them that small imperfections are part of live music and it’s good to learn how to deal with it on the spot.”

Jackson began the program with a recitation of Langston Hughes’ poem “Helen Keller” — the first of five poems by Hughes that served as interludes between each piece on the first half. END_OF_DOCUMENT_TOKEN_TO_BE_REPLACED

Pianos with pins and tape on strings, a bass drum and tam tam, crotales, Almglocken, and vibes. Microphones were hooked up all around the instruments. The feed was sent to speakers around the room. Lighting designer Nicholas Houfek hung incandescent globes over the arrangement of instruments from thin black wires stretching across the beams. END_OF_DOCUMENT_TOKEN_TO_BE_REPLACED

From the podium, Elim Chan set an ambitious tone for the evening. The rising star conductor, here in her Cleveland Orchestra debut, has a commanding style, and every twist and turn in Saturday’s performance tracked closely with her baton. END_OF_DOCUMENT_TOKEN_TO_BE_REPLACED