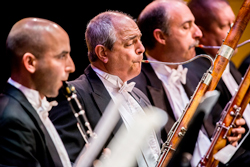 On Saturday evening, February 28 at the Breen Center for the Performing Arts, the BlueWater Chamber Orchestra, under the baton of guest conductor Raphael Jiménez, performed a sumptuous program of two works by giants of the Romantic era, Gabriel Fauré and Johannes Brahms.

Jiménez opened the concert with Fauré’s Pavane, op. 50, a hauntingly beautiful work constructed around its simple opening melodic theme. The work’s tempo has been a persistent bone of contention among conductors since its premiere, and Jiménez’s pace was perfect, not too fast or too slow. Flutist Sean Gabriel performed the popular opening melody with aplomb. The performance progressed as the opening melodic theme moved eloquently through the orchestra, reaching the final cadence with the same ease and grace that Gabriel had established in the beginning.

Second and last on the program was Brahms’s Serenade No. 1 in D major, op. 11. The final version of this six-movement work, originally written for nine strings and winds, premiered in 1860. It was published that same year, making it Brahms’s first orchestral work to appear in print.

The Serenade was obviously written during the composer’s formative years. At times, characteristics and thematic treatments that would permeate his Symphonies and more mature works can be heard. The first movement, Allegro molto, traverses a wide spectrum of tempi, rhythmic motives and melodic expressions. Following a somber Scherzo, the third movement opens with lyrical flute melodies. A pair of uncharacteristic minuets leads to a final Allegro featuring the horns. The piece concludes with a rollicking rondo played by the full orchestra.

Clarinetists Kristina Jones and Alix Reinhardt, along with hornist Ken Wadenfuhl, brought finesse and warmth to the proceedings. Concertmaster Kenneth Johnston headed up an impressive group of strings. Especially noteworthy was the skilled work of bassoonist George Sakakeeny, along with the solid strength of the viola section led by Laura Shuster.

Guest conductor Raphael Jiménez, Director of Orchestras at the Oberlin Conservatory of Music, conducted with sincerity and efficiency but often stretched the limits of clarity with wide, sweeping gestures. BlueWater, the newest orchestra on the Cleveland horizon has assembled a group of notable musicians from Northeast Ohio. They limit their concerts to just over an hour with no intermission, a practice that I find wonderfully refreshing!