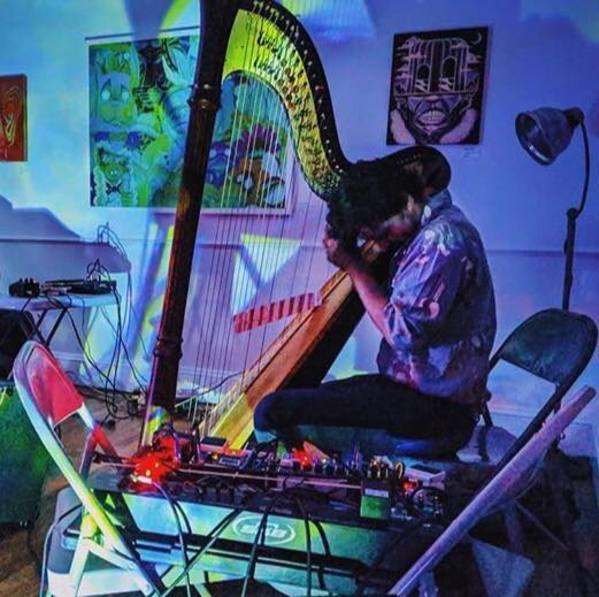 As musicians’ tastes change over time, it can be frustrating for them to realize that the instrument they’ve spent years mastering now confines their stylistic breadth. Or does it? In some cases, all that’s needed is a new mindset.

Years ago, composer, improviser, and harpist Stephan Haluska decided he’d had enough of the stereotypes about his instrument in Western culture — the angels, the magic, the dream sequences. He’s since re-imagined what the instrument can do, using extended techniques, electronic processing, and preparing the strings like John Cage would a piano.

All that and more can be heard during an hour-long improvisation that Haluska will present at the Bop Stop on Thursday, January 28 at 7:00 pm. The live stream is accessible for free, but donations are accepted here.

I reached Haluska on Zoom to talk about the specific tools and techniques he’s developed, and what it’s like to improvise for an hour. But first, I wanted to hear about the path he’s taken to reach this stage of his music-making.

He began with a very straightforward assessment of how he feels about the harp repertoire: “It’s not all that exciting.”

To Haluska, there are a few musicians out there who are creating “fantastic, pioneering work” for the harp, among them Zeena Parkins and Rhodri Davies, “but the list is pretty short,” he said. Studying composition as an undergraduate at Bowling Green State University, he was exposed to “all kinds of different music where the harp is just absent.” And so, first as a composer, he took it upon himself to promote the instrument and find new roles for it.

Early on, he found difficulty capturing his intentions through traditional notation. And even if he could express himself through nontraditional fashion, he realized there weren’t a lot of harpists interested in performing his style of music. “Generally it was music meant for myself,” he said. “Eventually I found that improvisation over a loose structure seemed like the best avenue for me.”

Lots of experimentation was needed to discover the materials and techniques that add up to his brand of sound. One important inspiration: John Cage’s works for prepared piano, as well as music for prepared guitar, and the harp. “There’s certainly a history of prepared harp, most notably with paper woven between the strings,” he said.

Haluska also took note of harpists playing with a violin bow or an ebow, a device commonly used with electric guitar. “With that, you can create these swelled, sweeping sounds without having to pluck the string.” 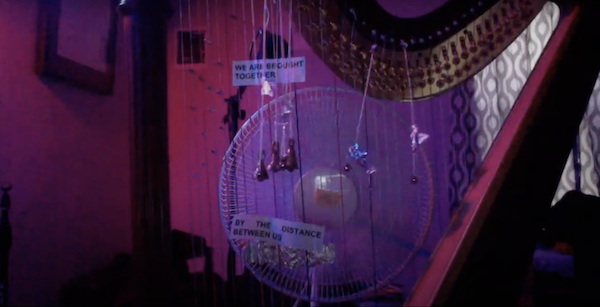 Separately, he began to experiment with another tool that’s pivotal to his improvisations: the electric fan. (Above: a screenshot from a streamed performance this past summer.) That began with an observation: if he took his instrument outside without a case, the wind resonated the strings, creating what’s known as sympathetic vibrations. The effect is like that of a wind harp or aeolian harp — named for Aeolus, the Greek god of the wind.

Studying harp and improvisation in graduate school at Mills College in Oakland, California, Haluska began tinkering with that effect and how he could control it in a concert-hall setting. “I played around with lots of different kinds of fans, and realized that once you get to a certain size or type, it more or less starts to sound the same.” His fan of choice is nothing fancy — the rotating kind you might set up beside you on a hot night.

And just like you might toggle from low to medium to high — and back to medium — as you try in vain to find the temperature that’s just right, Haluska also cycles through those settings, except that he actually has a plan: to activate different parts of the harmonic series and thus create different sounds. “The high setting produces more upper harmonics and has more of an intense timbre, while the low is a little bit more mellow and excites the fundamentals,” he said. Even the oscillation can make a difference.

The fan ushered in another question: what else could that stream of air agitate to create a sound? So he prepared the harp with little objects, like a string of bells suspended from alligator clips. “I attach pieces of foil to them that act as sails,” Haluska said, “so the bells move around, hit each other, and bounce on the strings.” Plus, the foil itself interacts with the strings, creating what he describes as a fluttering sound and a metallic texture.

On top of all that, those alligator clips can change the overtone series produced by the string, and change the character of the sound. “I play around a lot with that,” he said. “And that’s really fun along with the ebow, because I can get these crazy notes.”

It’s not just more colors for colors’ sake, but a palette from which Haluska can draw to structure his improvisation. Each section might be based on a particular sound or combination of sounds, adjusted and shaped to satisfaction before giving way to another “event,” as he said.

Those changes happen smoothly and gradually, adding up to an experience that Haluska hopes is meditative for the audience, just like it is for him. A helpful comparison might be the glacially-evolving works of John Luther Adams, whose music Haluska loves.

Here the delay pedal makes an important contribution. Not only does it thicken the texture of the music, but its long delay time adds to the feeling of gradual change. “Even when I add something new, you’re still getting hints of sound from before, which makes for really smooth transitions.” The music changes constantly, if slowly. “The idea is that if you listen in at any given moment, there will be a different mood.”

And for anyone worried about how that might come across through the internet, Haluska pointed out that he’s had great experiences with the streaming capabilities of the Bop Stop, which he called “top-of-the-line.”

Immersiveness is hard to come by amid anxiety and isolation, but maybe Haluska’s distinctive and slow-moving world of sound can accomplish that special something that feels more valuable than ever: losing track of an hour — or even better, of yourself.

The cimbalom was the feature of the show, an instrument capable of taking on many personas. Its performer, Chester Englander, has shaped his career around the instrument, and has inspired composers to write more repertoire for it, some of which was presented on the program. END_OF_DOCUMENT_TOKEN_TO_BE_REPLACED

You wouldn’t expect that acoustic from a glance at the nave, which is wide and long, but not especially lofty. But when I guest conducted a local amateur choir and professional orchestra in Beethoven’s Mass in C there a few years back, during the first rehearsal we released the final chord of the “Gloria” and listened in astonishment for the next several seconds. The sound continued to roll down the space like the big wave that surfers dream about. END_OF_DOCUMENT_TOKEN_TO_BE_REPLACED