“This concert completely lives up to its title,” program curator Carolyn Warner said during a recent telephone conversation. Warner, who joined the violin and keyboard sections of The Cleveland Orchestra in 1979 and serves on the CIM faculty, noted that deciding to include the two works by Ravel was a no-brainer. “It’s poignant that Stephen and James are playing on the concert, because our Trio played our transcription of the Adagio from Ravel’s Piano Concerto in G for Pierre Boulez maybe ten years ago, and he really appreciated it. He told us that we should transcribe Le Tombeau de Couperin. So these pieces have a direct relationship to him, and they represent that short personal connection we had that was so lovely.”

Warner pointed out that the inclusion of Debussy’s Cello Sonata stems from the Grammy-winning recording of of Debussy’s La mer and the Première rhapsodie for clarinet that Pierre Boulez made with The Cleveland Orchestra. “I wanted to include some Debussy and the Cello Sonata is one of my favorites. So that, too, was a no-brainer — as was Stravinsky’s Suite from L’Histoire du Soldat. Many times when Mr. Boulez came to conduct there was some Stravinsky on the programs. He did all of Stravinsky’s important works with us, including Symphony in Three Movements, Petrushka, which we recorded with him, and Les noces. So programming some Stravinsky was absolutely essential.” 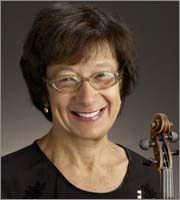 Warner will be joined by her CIM piano faculty colleague Daniel Shapiro for György Kurtág’s transcriptions of Bach Chorales. “Kurtág has a close connection to Boulez both personally and musically. Kurtág conducted his own works with the Ensemble InterContemporain in Paris, and he studied with Olivier Messiaen, who was also Boulez’s teacher. Kurtág wrote Petite musique solennelle en hommage à Pierre Boulez, which the Orchestra played back in March. Daniel and I will also be playing Berg’s Variations on Themes from “Lulu.” Boulez was an exponent of the Second Viennese School, and I figured there should be some of that as well. So there’s a close connection to Boulez in all of the music that I chose.”

As a member of The Cleveland Orchestra, Warner had the good fortune of playing under Pierre Boulez many times. “Every single concert with him was remarkable — his Mahler 10, his Pelléas et Mélisande of Schoenberg. I can remember at least ten pieces that I played with him that I think were amazing. The first piece I ever played with him was Stravinsky’s Le Chant du Rossignol. I loved the way he did it. And oh, I will never forget the Berlioz Symphonie fantastique because of his unique interpretation that did away with the quirky, loud, crazy part of the piece. He made it quintessentially French.”

One concert that Warner remembers very fondly occurred at Carnegie Hall. “It was a concert performance of Ravel’s L’enfant et les sortilèges that was absolutely spectacular and totally unforgettable.”

A native of Winnipeg, Canada, Warner did her post-graduate studies at the Paris Conservatory, where she came in contact with many people who were close to Pierre Boulez. “Pierre-Laurent Aimard was a little boy in my musical analysis class, and although at the time he was studying with Yvonne Loriod, he had a close connection to Boulez. I was also close to a composition student of Messiaen’s, so my circle in France in the mid-‘70s was very near to Boulez’s circle. When I joined The Cleveland Orchestra and got to play under Boulez, that education in France came back to me. He was the embodiment of my French teachers. They all had the same values and down-to-earth ways of talking about the music — poetic but not too flowery — just what was needed to solve the problem.”