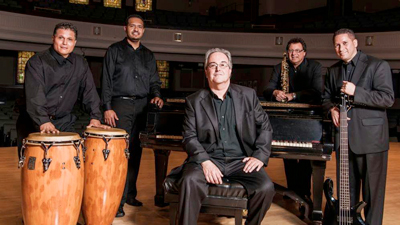 “It’s hard to believe this is Year 19,” Topilow said during a telephone conversation. “Keeping with tradition, the first half of the concert will feature the orchestra performing some traditional selections that we always do, plus some new arrangements as well. The first half really is a tribute to the old and the new.”

The concert begins with the opening of Richard Strauss’s Also Sprach Zarathustra (from 2001: A Space Odyssey). “After that, we’ll go right into ‘Across the Field,’ the Ohio State fight song, which we have to do since they are in the top four and have a big game on New Year’s Day.”

New to this year’s program is Pharrell Williams’s hit song Happy. “The song has well over 500 million hits on YouTube,” noted Topilow. “And I’ll teach the audience to sing it as well. Everyone will get a chance to blow their horns during Josef Strauss’s Feuerfest Polka, and that’s followed by the theme from Downton Abbey, which resumes again on January 4.”

Another new addition will be the Queen classic Bohemian Rhapsody. “One of my former assistant conductors out in Colorado has made a really great arrangement of the song. It’s a lot of fun. We’ll end with Victor Herbert’s Festival March and the audience joining in on Auld Lang Syne. It’s not a long first half because I want to be sure there’s plenty of time for the Mambo Kings.” As always, Topilow has some surprises in store, but I am sworn to secrecy.

Severance Hall will heat up with the sounds of Latin Jazz during the second half when the Mambo Kings join Topilow and the POPS Orchestra. Formed in 1995 by pianist Richard DeLaney, the Mambo Kings have earned a national reputation for their blend of Afro-Cuban rhythms and jazz improvisation. Since their debut in 1997 with the Rochester Philharmonic Orchestra, the band has appeared at the Bravo! Vail Valley Music Festival and in concerts with the Baltimore, San Antonio, Vancouver, Winnipeg and Dallas Symphony Orchestras.

“What we know as mambo today grew out of the percussion-based rhythms that came from Cuba to New York City and met up with the Big Bands during the 1940s,” DeLaney explained by telephone from his home in Rochester, NY. “Particularly, this happened between Chano Pozo and Dizzy Gillespie. It all comes out of Cuba, but more importantly, it all comes out of Son.” Son cubano is a combination of the Spanish canción, the Spanish guitar and West African rhythms.

“That’s where mambo, rumba and salsa all come from. They’re all based on the rhythms that came from West Africa to Cuba, which was an important point in the slave trade, so all these peoples came together and exchanged ideas. Then the Catholic influence from the Spaniards introduced everyone to European music, so it all just sort of fell into place. Of course, I’m summarizing a couple hundred years of history into one sentence,” DeLaney said with a laugh.

DeLaney and his Mambo Kings colleagues, Wilfredo (Freddy) Colón, percussion, John Viavattine, saxophone and Hector Diaz, bass, will open their portion of the show with a tune that may not immediately come to mind when thinking about mambo, The Beatles’s Day Tripper. “I grew up in South America [Peru] listening to the Beatles,” DeLaney said. They were as big down there as they were up here. And Day Tripper was a worldwide hit for them.

“For some strange reason I thought I’d like to arrange a Beatles tune for the band, and because the song is a cha-cha it was easy to graft the rhythm onto the tune. Eventually I arranged it for orchestra because Lennon and McCartney have ‘curb appeal,’ shall we say. It actually gets a really good reception from audiences because they’re surprised that it works. If it didn’t work we wouldn’t play it. And there’s a lot of stuff in my piano bench that didn’t work. You walk a very narrow line when you jazz-up a tune.”

The set also includes DeLaney’s arrangements of the Dave Brubeck hit Blue Rondo a la Turk, re-titled as Blue Mambo, and Guillermo Castillo’s Tres Lindas Cubanas, which DeLaney describes as a nod to the Cuban songbook. “It’s a great tune but it’s a bit of a mongrel. Castillo did not write the slow and stately introduction — that was written by someone else. But he did write the fast dance part. This gives you an idea of the tradition of this music. It’s not unusual to discover that any number of people contributed to the writing of a song.”

Two of DeLaney’s original compositions are also on the playlist: Marinera, which is based on Peruvian music, and Danzón, which began as a piano piece and was later orchestrated.

The evening concludes with DeLaney’s arrangement of the Tito Puente tune Oye Como Va. “My arrangement is of the Carlos Santana version, because I think it is the one that most generations of listeners are a little more familiar with. It’s the version I grew up listening to. And it’s a nod to Tito Puente, who is the patron saint of Latin Jazz.”

When he’s not busy composing and arranging, Richard DeLaney, who holds a Master’s Degree from the Eastman School Of Music, spends his time teaching at the Hochstein Music school in Rochester, where he is chair of the jazz studies program.

“I’ve been lucky because I’m the only ‘jazz’ piano teacher on staff at Hochstein, and we have a very large piano faculty. But what’s interesting to me is realizing that what many high school kids today think of as jazz is not exactly what I thought jazz was when I was their age. For my generation jazz was Bebop, like Charlie Parker, Dizzy Gillespie and Miles Davis. But for this generation, jazz also incorporates pop music, hip-hop, and rock. Some of my students certainly know and like Bebop, but others are more into Emerson, Lake and Palmer. So the young people are sitting down trying new chord progressions, and improvising over them. And, to me, that’s jazz. I think that if that is what they want to do, I say go-for-it, because there is an audience out there for all of this stuff.”

The concert will be followed by dancing. Carl Topilow and an ensemble of Cleveland POPS Orchestra Members will provide the dance music in the Grand Foyer, while Rock & Roll music will be provided by the No-Name Band in the Smith Lobby. Cash bars and complimentary desserts and coffee will be available. The evening also features the traditional midnight balloon drop.

Cleveland POPS Orchestra New Year’s Eve concert ticket holders may arrange for overnight accommodations at the nearby InterContinental Hotel and Conference Center. Enjoy a luxurious suite on December 31st at an economical Cleveland POPS Package discount price. The POPS Package also includes free breakfast for two, free valet parking and free transportation to and from Severance Hall. Hotel accommodations may be obtained by calling 216-707-4100 or online at clevelandpops.com. Concert tickets must be purchased separately to qualify for the hotel discount.

END_OF_DOCUMENT_TOKEN_TO_BE_REPLACED

Then, you heard all the qualities that make for a stunning soloist. Winner of the 2013 Cleveland International Piano Competition, Khristenko was back in town this month for a recital in Piano Cleveland’s summer series, Piano Days @CLE. And he couldn’t help but revel in the spotlight a little, even as he settled into a more collaborative role at the keyboard for his program, “Stanislav and Friends.” END_OF_DOCUMENT_TOKEN_TO_BE_REPLACED