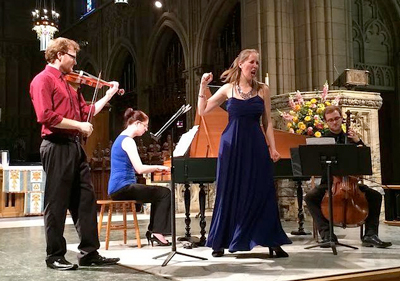 The Italian baroque cantata repertoire is a treasure trove of forgotten masterpieces full of passion, surprise, and challenge. Burning River Baroque revived three of these mini-operas Friday evening as the cornerstones of their program, “Obsession and Unrequited Love.” Though on a small scale, the impact of these musical dramas is explosive, delivered as they were here with high energy, skill, and conviction.

The three core personnel of Burning River Baroque provided this evening’s fire. Malina Rauschenfels was the stunningly expressive vocalist in all three cantatas; Peter Lekx, on baroque violin and viola, played straight man to her dramatics with wit, elegance, and verve; and harpischordist Paula Maust kept these dueling trebles on the same page with clear rhythms and graceful right-hand figurations.

The cantatas were all from the early eighteenth-century, and all (of course!) dealt with unrequited love. Vivaldi’s extravagant Lungi dal vago volto opened the concert, sung from memory and with unreserved drama (some audience members seemed a bit startled by its forthright sexiness).

In Giovanni Bononcini’s Alle sue pene intorno, Raushenfels — in her persona as a scorned lover angry at Cupid — broke the fourth wall, imploring audience members to lend her an arrow to plunge into the heart of the insolent little god of love: fortunately for decorum, everyone’s quiver seemed to be empty for the moment.

Domenico Scarlatti’s cantata, No, non fuggire, o Nice (who knew that Scarlatti wrote cantatas?) ended the program with a Spanish-inflected patter-song burning with the fire of fandango, accompanied by castanets and a fiercely strummed violin. Though the lover here, frustrated by the beloved’s scorn, decides that silence is the best weapon, the piece, and this very Mediterranean performance of it, were the opposite of silent. All the stops were pulled out, and rightly: this is not music to be played with gloves on.

In all three vocal pieces, Rauschenfels sang from memory, allowing her the freedom to move off the stage and into the audience, to accompany the extravagance of the scores with dramatic gestures, and, most importantly, to deliver the vocal lines with utter conviction in their rhetorical excess.

Between the cantatas, the same three performers interpolated instrumental pieces that, astonishingly, matched the vocal numbers in hyperbolic sprezzatura (the Italian word for doing amazing things without seeming to break a sweat). Lekx gave us a dazzling violin sonata by Veracini, alternatively noble, jagged, and stormy, virtuosic and exciting, though plagued by tuning in the double stops (an E-string had popped just before the concert). Rauschenfels, equally accomplished on the cello as in the voice, played a ferociously fast sonata by Nicola Porpora. Maust had a few moments alone with a graceful Scarlatti sonata. All three together performed Corelli’s La Follia with breathtaking variety and flexibility, each new variation (and there are many, a new one occurring every eight bars!) declaring its intention and affect without a second’s delay.

Burning River Baroque, in what I believe is its third season, is maturing as a group that offers exciting and varied early music with a sense of high drama and appeal, even to those who have rarely heard baroque music other than The Four Seasons or the Brandenburgs. The group is offering a program later this month featuring sacred music of the German Baroque, and will be part of the free Bach celebration October 18 at Severance Hall. Catch them there, or catch the next two performances of this memorable program!

“Obsession and Unrequited Love” will be repeated on Saturday, October 4 in Shaker Heights and on Sunday afternoon in Lakewood. See the Concert Listings for details.