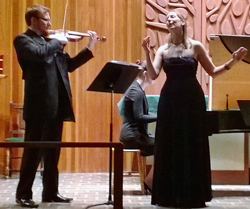 “We have a penchant for the dramatic,” Burning River Baroque artistic director and violinist Peter Lekx said in a recent Skype conference call. “This program found itself when we discovered Nicola Porpora’s cantata, Destatevi, destatevi o pastore. It just screamed Burning River Baroque.”

“It’s about a broken-hearted shepherd who falls hopelessly in love with a nymph,” added Burning River Baroque soprano and executive director Malina Rauschenfels. “He takes himself way too seriously and writes his own epitaph on a tree.”

According to Lekx and Rauschenfels, who collaborate to plan BRB’s programs and finish each other’s sentences when they talk about that process, the rest of the program of Italian baroque cantatas and instrumental sonatas that the ensemble will perform three times this weekend began to fall neatly into place. “Giovanni Bononcini’s Alle sue pene intorno and Domenico Scarlatti’s No, non fuggire o Nice spoke to uswith their energy, and in the second case, with its Spanish flair. A very dramatic Porpora cello sonata and violin sonatas by Veracini and Scarlatti fill out the program.”

Where do Lekx and Rauschenfels find such interesting repertoire? “We do a lot of listening and we’re very glad to have IMSLP [the online International Music Score Library Project], where people put new first-hand source material up all the time,” Lekx said. That and the old-fashioned inter-library loan service. “In planning this program, I probably ordered thirty scores from around the country on OhioLink,” Rauschenfels added.

“A lot of this music has never been recorded,” Lekx noted, “and when it has the recordings are not always great.” “Wow!” Rauschenfels exclaimed. “People actually paid money for this recording? In the end, you don’t really know if a piece is a good one until you play it.”

Lekx went on to talk about Veracini, “who was called the ‘head madman’ because of his rash temper. He jumped out of a window once after an argument and walked with a limp the rest of his life. But his violin writing is fantastic — he was one of the best-known players in Europe, especially in Italy and London. Someone wrote that one never sees a London concert now without Veracini performing on the violin.”

The Veracini piece on BRB’s program is the Sonate accademisch in g minor, so titled because it was written “for an Italian Academy or high-class salon where wealthy people would gather for chamber music and discuss intellectual subjects,” Lekx said.

Like many musicians who have joined the Early Music movement, Lekx and Rauschenfels were originally headed in a different direction. Lekx entered Boston University’s graduate program as a modern violist and emerged playing baroque violin. Rauschenfels, who began her career as a cellist and played with a number of notable ensembles in New York, gravitated toward the baroque cello and recently became interested in singing. “Malina mostly played cello with Burning River Baroque at first,” Lekx said, “but then we discovered she had a fabulous voice.”

“It’s really interesting to do both,” Rauschenfels said, “but I love being a singer after thirty years as a cellist. You get to set the tone rather than to be in a supporting role.” But she says she’s easy on her continuo partners when she sings. “I don’t want to impose,” she noted, going on to agree with Lekx that performing with BRB inspires a spirit of collegiality. “We spend a long time in rehearsals exploring the music from all angles.”

Though based at St. Alban’s Episcopal Church in Cleveland Heights, where Burning River Baroque will play on Saturday, May 31 at 8:00 pm, the ensemble enjoys the challenges and rewards of playing in different venues. The first of its three concerts this weekend will take place at Lakewood Presbyterian Church on Friday, May 30 at 7:30 pm, and the third, on Sunday, June 1 at 3:00 pm, will mark BRB’s first performances at Trinity Cathedral. Joining Lekx and Rauschenfels this weekend are baroque cellist Matt Zucker and harpsichordist Paula Maust.

Lekx and Rauschenfels believe that live performances serve up something special for listeners. “There’s an improvisational aspect to them and every time there’s something a little different,” Lekx said. “It’s important for us to make the audience a big part of the experience. When they’re surrounded by the music they become participants themselves.” In keeping with that philosophy, Burning River Baroque adapts itself to each of its venues in a unique way, forming processions and playing from different locations.

Rauschenfels also feels it’s important to engage the audience viscerally, especially when she’s singing in a language they don’t speak. “I’m extremely aware when I’m not singing in English and since I have a bit of background in modern dance, I’m interested in how I can use gesture to make listeners feel the same feeling I’m feeling.” And don’t feel strange if Malina Rauschenfels seems to be addressing you directly. “The second I’ve walked out on stage, I’ve picked the characters out of the audience that I’m singing to. It makes a difference.”

Published on ClevelandClassical.com May 29, 2014.

END_OF_DOCUMENT_TOKEN_TO_BE_REPLACED

What was that strange din coming over the live feed from Ludwig Recital Hall on Friday evening, July 23, as the Miami String Quartet filed onstage to play the third faculty recital of the Kent Blossom Music Festival? Accustomed as we were during the pandemic ban on live audiences to hearing the sound of no hands clapping, it was both startling and thrilling to witness a large crowd putting their hands together to welcome one of the Festival’s perennial favorites back for an in-person performance. END_OF_DOCUMENT_TOKEN_TO_BE_REPLACED

Practical reasons aside, there aren’t many ensembles who can put together an all-Mozart evening as elegantly as The Cleveland Orchestra. END_OF_DOCUMENT_TOKEN_TO_BE_REPLACED