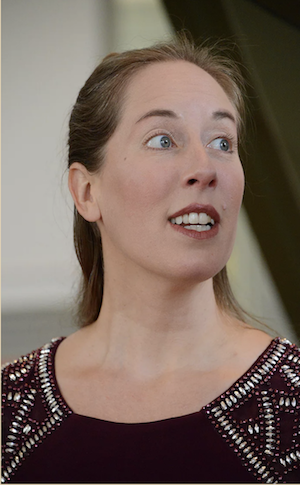 “It’s a really fun concert for people who like French stuff, comedy, opera, chamber music, or Baroque,” Rauschenfels said. “I don’t think of us as only a Baroque group because that’s in some ways a small part of what we do — it’s just the lens that everything comes through.”

This program draws on two of Rauschenfels’ many skills, featuring her as a soprano and a Baroque violinist — sometimes simultaneously. One big plus about her combined duties?

“Rehearsal time,” she said during a recent phone call. “At home alone you get to practice ensemble — the way you want things to connect, or when you don’t want things to line up. I love pulling against the continuo or melodic lines, getting ahead or behind, and that takes incredible rehearsal time in a group. But if you’re doing both of them yourself, you get to decide all of that ahead of time.”

Originally a cellist, Rauschenfels added composition to her studies late in high school, and majored in both disciplines at the Eastman School of Music. There, and during her further cello studies at Juilliard, she immersed herself in early and new music. “It’s amazing how much those two have in common,” she said, pointing out their shared elements of improvisation, rhetorical language, and greater freedom afforded to players.

Singing came into the picture later. “I was about 30 and in New York with a very intense violin-teaching position that took huge amounts of my time,” she said. “I ended up joining a new music choir quite by accident. I realized that singing allowed me to put a lot of things together — everything I’d learned about Baroque music on cello, and about improvisation and writing.” Plus her five years of dancing in New York, which could inform her gestures as a singer.

“I felt like I had so many more options as a vocalist,” Rauschenfels said. “I love cello — when you’re playing with a good group, it’s amazing. But when you’re playing with a group that’s not taking an artistic stance, then I find cello to be laborsome.” She enjoys being known in the different circles of singing, violin, and cello. “I love the variety. If I had to do any one of those things 24/7, I don’t think I could handle it. And they all advise each other.” 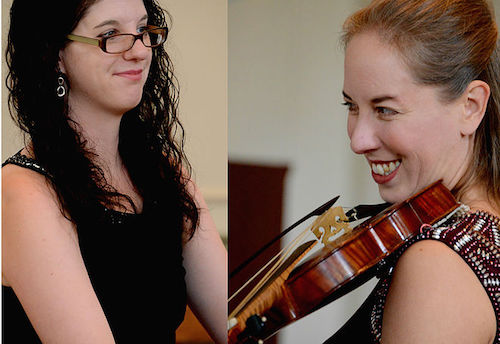 “Grandval is possibly my favorite composer of all time,” she said. “I want to do all of his works.” She has enjoyed exploring how the characters develop throughout this comedic cantata. The widow, for example, goes from “old and matronly to kind of a newly-in-love teenager, just bubbling with excitement,” she said. “They’re thick, complex, changing characters, as in so much of Grandval’s work.”

Élisabeth Jacquet de la Guerre’s cantata Semelé focuses on that figure in Greek mythology, the mortal mother of Dionysus by Zeus. Semelé’s impatience for proof of her lover’s godly form leads to her immolation — the penalty for a mortal who looks upon a deity. 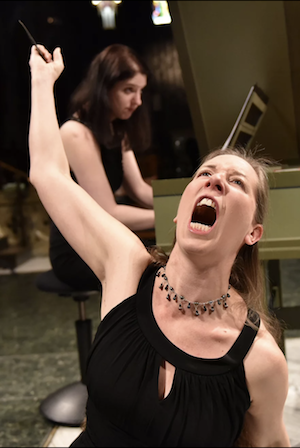 Rauschenfels has been fascinated by the connections between that cantata and modern issues of divisiveness and bias. “Pick any subject that’s in the news right now, like illegal immigration,” she said. “If you are on one person’s side and read their view, of course you’re going to believe it. But if you interview an illegal immigrant, you see the other side, of desperation and hopelessness. If you don’t get both sides, then you don’t have a clear view.”

That idea of limited perspective comes into play in Semelé. “People during the French Baroque knew everything about these mythological characters, and yet the cantatas and librettos present a very narrow picture.”

Rauschenfels reflected on how women have been portrayed through history. “In the Renaissance period there was courtly love. The woman was kind of untouchable, and love was never realized, it was just adored from afar.” By the end of the French Baroque, things had changed. “There were women who decided it was much more fun to be single or in the process of courtship than actually married, because their lives weren’t so great after marriage. So they started this movement of La Femme Indifférente — ‘The Indifferent Woman’ — to get away from that.”

Then came the backlash. “If you look at the librettos from the very early Baroque to the late French Baroque, you see a huge difference,” she said, pointing to stories of Persephone, Eurydice, and Apollo and Daphne. “They no longer gave women a voice in the story.”

Rauschenfels has often wondered whether texts chosen by de la Guerre are as brazenly anti-feminine as they seem. Was the composer seeing them sarcastically? “Or trying to be a man in a man’s world? I want someone to do a dissertation on that.”

Quite the opposite is the story in Julie Pinel’s Le Printems Cantatille, where a disinterested woman is not conquered by a lovelorn man, and he simply asks the nightingales to sing her a song. Was Pinel an 18th-century feminist? 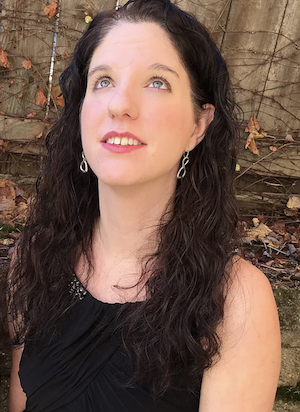 Unfortunately almost nothing is known about Pinel, including her dates of birth and death. “We have only two books that she published in a short span of time,” Rauschenfels said. “She’s pretty newly discovered. I would love to go back and interview these female composers and see what their viewpoints were in that day. There’s so much more to know.”

Paula Maust, who is currenty pursuing a doctorate in harpsichord at the Peabody Institute of Johns Hopkins, will interweave Joseph-Nicolas-Pancrace Royer’s Pièces de Clavecin with the program’s cantatas. Rauschenfels described Maust’s contributions to Burning River Baroque as “incredible donations of time and energy — and brains. She has the all the skills that I feel I don’t have, which makes her so incredible to work with.”

Published on ClevelandClassical.com May 14, 2018.

Jackson began the program with a recitation of Langston Hughes’ poem “Helen Keller” — the first of five poems by Hughes that served as interludes between each piece on the first half. END_OF_DOCUMENT_TOKEN_TO_BE_REPLACED

Pianos with pins and tape on strings, a bass drum and tam tam, crotales, Almglocken, and vibes. Microphones were hooked up all around the instruments. The feed was sent to speakers around the room. Lighting designer Nicholas Houfek hung incandescent globes over the arrangement of instruments from thin black wires stretching across the beams. END_OF_DOCUMENT_TOKEN_TO_BE_REPLACED

From the podium, Elim Chan set an ambitious tone for the evening. The rising star conductor, here in her Cleveland Orchestra debut, has a commanding style, and every twist and turn in Saturday’s performance tracked closely with her baton. END_OF_DOCUMENT_TOKEN_TO_BE_REPLACED