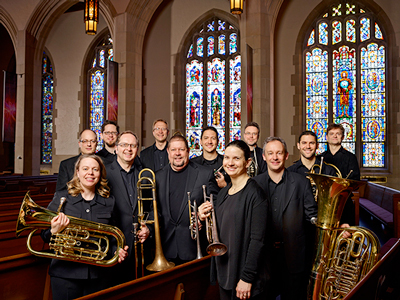 “It’s a minor miracle,” said Burning River Brass artistic director Heather Zweifel. “Burning River Brass is giving a concert that’s not a Christmas gig!” That’s going to take place on Wednesday, May 27 at 7:00 pm at Pilgrim Church in Tremont as a special, bonus concert on the Arts Renaissance Tremont series. Admission is free, but donations are welcome.

In the last few years, BRB has come to be a reliable harbinger of the holiday season with a series of performances throughout Northeast Ohio, but the twenty-year old brass ensemble started out playing during all seasons of the year. Then its members, originally area freelancers, began landing permanent or temporary jobs in prestigious orchestras in the USA and Canada, making it difficult for the group to come together on a regular basis — except during the holidays.

“We got to the point where if wasn’t going to be all of us, we’d rather not perform as a group,” Zweifel said in a phone conversation. The trumpet player and her percussionist husband also fit into that category of being committed to jobs elsewhere: Feza Zweifel, the group’s percussionist and principal arranger, plays timpani with the National Arts Center Orchestra in Ottawa, Ontario. Heather frequently subs there, as well as playing in other orchestras far and wide.

But the invitation to play at the International Trumpet Guild Conference in Columbus next week gave Burning River Brass the irresistible opportunity to reassemble outside of December — and the impetus to add concerts before and after. “We’ll play the day before at Pilgrim Church in Tremont and the day after the conference at First Presbyterian Church in Wooster,” Zweifel said.

If absence makes the heart grow fonder, that’s true for performing ensembles as well. “I would say that our present situation has made the group even more special, because we all look forward so much to getting together. We’re all good friends. We love Christmas and we love playing at Pilgrim — at our last Christmas concert (pictured below) there were people sitting behind us on the stairs and on the floor — but it’s going to be great to play our other music again live.” 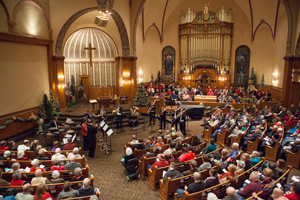 Heather Zweifel was inspired to found Burning River Brass because of a positive experience in high school. “My teacher, who just celebrated his 90th birthday, ran a brass ensemble in Northern Virginia, which is still going, called Brass of Peace. It was an honors ensemble, so it included top players in the area who came from different schools. I was in band, and marching band, and orchestra, but the brass ensemble was my favorite thing to do. And Feza has always been a huge brass person. For a few years, he dabbled in the trombone quite a bit. We used to play quartets with him — three trumpets and trombone. It was a change of pace for him to get away from all the percussion.

“Then we had this really tight-knit group of friends who were all free-lancers in Cleveland,” she said. “Sometimes you get lucky and play with your friends, other times not, so we talked about starting a group where we could all play together, just as entertainment for us. When we actually did, we thought, this is really good. Maybe we should do this regularly. I recently went up to my teachers’ 90th birthday with the woman who now runs Brass for Peace — she used to be in the National Symphony — and we were talking about what a difference it makes if you really like the people you’re playing with. When you’re having fun, it really is palpable. I think I’ve been spoiled.”

On May 26 at Pilgrim, Burning River Brass will play a demanding program of music by Raymond Premru, Mozart, Brahms, Respighi, Lutoslawski, Debussy and Prokofiev, most of the works having been arranged by Feza Zweifel. “Feza just fell into arranging,” Heather Zweifel said. “He was in another group that’s not as active anymore called Proteus 7. He started arranging for them, then for us, and he’s just kept getting better and better at it over the years.

One of Heather Zweifel’s favorite pieces is Respighi’s Adoration of the Magi from the Botticelli pictures suite. “We’ve performed it at Christmas, but I think you can play it any time. I was playing the piece in an orchestra with Dave Mitchell, and I turned to him and said, “BRB?” I sent Feza the link and the music and he started on it right away. I have to say that I thought it would work really well — and it worked even better than I had hoped.”

Listeners may be surprised to hear three of Debussy’s piano pieces arranged for brass ensemble. “It cracks me up that Debussy works so well for brass,” Zweifel said. “Maybe it’s because he writes with so many colors. We must have twelve movements of Debussy that we rotate in and out. The second one, La Puerta del Vino, is one of Feza’s favorites. He’s a huge fan of the bass trombone and Tom Joyce will have a good time there.”

Three Prokofiev arrangements include arrangements of two piano pieces and “The Evil God and Dance of the Pagan Monsters” from the Scythian Suite. “’The Evil God’ has always been one of our favorite things to play,” Zweifel said. “People have told us that after they heard the brass version, the orchestra version sounds boring by comparison.”

And then there’s the “Queen of the Night” aria from Mozart’s The Magic Flute. With no soprano onboard, the solo honors fall to the piccolo trumpet player, Justin Emerich. “We figured we had to make somebody suffer at the trumpet conference,” Zweifel said.

Fans of Burning River Brass will be happy to know that another CD may be in the works in addition to the six recordings BRB has already released (their last release, Classical Impressions, came out in 2013 and will be available at the Pilgrim concert). Although BRB has six file cabinets full of music to choose from, No. 7 just might be another Christmas album. “We have enough music to record another Christmas disc,” Heather Zweifel said. “Feza keeps bringing it up, but I say, ‘No!’ We’d have to title it ‘Burning River Brass: The Last Christmas Album Ever.’”

Published on ClevelandClassical.com May 20, 2015.

“Mary’s Song” refers to the Magnificat (“My soul doth magnify the Lord”), sung by the soon-to-be mother of Jesus in response to the message the angel Gabriel delivered to her in the Gospel according to Luke. The text has been set countless times by composers in all eras, largely because the Magnificat is one of the invariable texts in the daily service of Vespers, as well as its Anglican relative, Choral Evensong. END_OF_DOCUMENT_TOKEN_TO_BE_REPLACED

Music director and conductor Daniel Meyer built his playlist around Cleveland themes and scenes. “Exploration CLE” made use of engaging selections from the classical canon and beyond that celebrated “what makes Cleveland so special.” Happily, he and his musicians avoided constructing a visual slide show, choosing to let the music speak for itself. END_OF_DOCUMENT_TOKEN_TO_BE_REPLACED

You could see the relationship at work on a practical level. Repertoire for two players at the same piano requires a certain choreography. There’s just one of each pedal to share, and the hand crossings left and right — which can be so fun to watch a soloist pull off — get more complicated when another person’s involved. At times, Pompa-Baldi drew a hand away from the keyboard and into his body, making room for Friscioni, and at the close of a few delicate phrases, the two were crouched together over the same final notes at one end of the instrument. END_OF_DOCUMENT_TOKEN_TO_BE_REPLACED