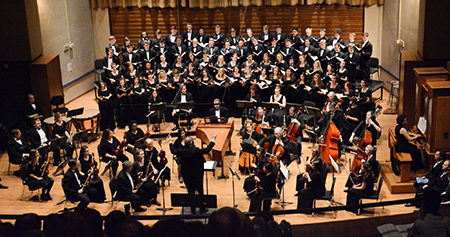 For their Saturday evening concert on April 20, the Baldwin Wallace University Bach Festival presented Johann Sebastian Bach’s St. John Passion in Gamble Auditorium on the BW campus. Festival Director Dirk Garner conducted the Motet Choir and a professional orchestra that included members of Chatham Baroque, who had performed earlier in the Festival.

The key solo role of Evangelist was sung by outstanding American tenor Nicholas Phan, who has in the last few years appeared in performances of the St. John Passion with both The Cleveland Orchestra and Apollo’s Fire. Baritone Tyler Duncan was Jesus, and the roles of Pilate and Peter were taken by baritone Charles Wesley Evans, who also sang the bass arias. Other aria soloists were soprano Molly Quinn, countertenor Jay Carter, and tenor Brian Giebler. There was not a weak link in the bunch.

Garner conducted a tight, responsive performance, always pressing ahead. Phan’s recitatives were incisive and dramatic. He was fully engaged and an expert in the German text, with impeccable diction. Time and again he grabbed us by the collar and made us listen to this timeless Christian tale. Duncan’s Jesus was more removed, resigned, and singing with unearthly calm as one who already knows the outcome of the story. Evans skillfully portrayed the weak-willed Pilate trying to find a way to release Jesus, but eventually bowing to crowd pressure and ordering his execution.

The aria soloists each brought personality and a high degree of musicality to their work and were markedly different in voice from the leading characters. The arias comment on the action from a pietistic Christian perspective, internalizing the biblical story.

Carter’s countertenor was simultaneously masculine-sounding and ethereal. Quinn’s light, high voice was perfect for the lively soprano arias. The sweetness of Giebler’s impressive high tenor created the image of a youth witnessing the passion unfolding before him, yet only able to internalize his thoughts about the action. Giebler was especially fine in the coloratura da capo aria Erwäge (“Ponder”). In the repeated first section, he reduced his dynamic, yet was in full control of his sound and the many notes. He was the only one of the soloists who did much in the way of added ornamentation during the da capo repeats.

Evans’s voice is more of a baritone than a bass — he sometimes lacked heft in the lower passages of his arias. In Eilt, ihr angefochtnen Seelen (“Hasten, you souls assailed, leave your caves of torment…”), the chorus repeatedly interjects, Wohin? (“Where do we go?”) Here Garner used a small semi-chorus for these two-syllable exclamations, which were inaudible, and made us miss out on one of Bach’s most dramatic musical moments.

The final chorus Ruht wohl (“Rest well”) restored calm at the end of the almost two-and-a-half hour performance. The final chorale of praise gives an optimistic view of redemption and the afterlife.

The many obbligato and continuo performers were all excellent, but special mention must be made of faculty organist Nicole Keller, who played virtually every note in the Passion. Her sensitive accompaniments were the instrumental glue that held the work together.

The redesigned Bach Festival program book was lavish, with complete texts and translations, as well as photos and biographies of the performers. In the case of the St. John Passion, there was also a lengthy scholarly essay about the work by Melvin Unger, as well as running commentary interspersed with the libretto. It was well-intended, but too much, especially since translations were clearly projected above the stage.