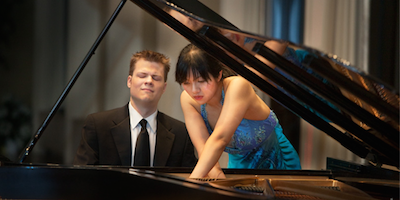 The duo piano team of Greg Anderson and Elizabeth Joy Roe combined virtuosity and entertainment at their afternoon concert on April 13 in Baldwin Wallace’s Gamble Auditorium, as part of the 2019 BW Bach Festival. Johann Sebastian Bach’s works were filtered through the lens of composers as diverse as Heitor Villa-Lobos and György Kurtág, and through the duo’s own arrangements.

It was not clear in the opening piece, Four Canons on the First Eight: Notes of the Goldberg Ground, BWV 1087, where Bach ended and Anderson and Roe began. Anderson first played the repeating eight-note pattern that forms the harmonic basis of Bach’s “Goldberg” Variations. The single bass line was then followed by four canons for two pianos. The pianists reworked four of Bach’s elaborate canons for two pianos, and their arrangement made them, for all intents and purposes, into very skilled new pieces in Bach’s style.

The Goldbergs were followed by a much more succinct transcription of the alto aria “Erbarme mich, mein Gott” (Have mercy, my God) from the St. Matthew Passion. The vocal work was disassembled and reconstructed for two pianos, with melodic and accompanying music passing between them. It became an almost abstract composition, played with a very Romantic interpretation.

The most substantial work on the program was Johannes Brahms’ Sonata for Two Pianos in f, Op. 34b. The Sonata originated as a work for string quintet that Brahms later disavowed in favor of his two-piano version. Its emotions range from intimacy to thunderous drama. The second movement is a gracious waltz, rocking gently. Greg Anderson compared the third-movement scherzo to a Star Wars march, a seemingly absurd image, but the piece is a battle between major and minor, and it is not clear which mode will win. In the end, it is inconclusive, as the third movement segues directly into the fourth, which has its own dramatic momentum and contrasts between repose and high drama. What seems to be a final cadence is not, but continues to chromatic passages with modulations through several keys before the final cadence. This was a brilliant performance, played from memory, as was the rest of the program.

The second half of the concert was devoted to transcriptions of various kinds. “Contrapunctus IX,” a double fugue from Bach’s very late The Art of Fugue, shows his contrapuntal skill. The Art of Fugue was written in open score with one musical line per staff, and Bach did not specify any instrumentation, so an imaginative transcription for two pianos was fair game.

Heitor Villa-Lobos composed a series of nine works in homage to J.S. Bach. Anderson and Roe transcribed the “Aria” from the Bachianas Brasileiras No. 5, originally for solo soprano and eight cellos. This was less successful than their other arrangements. The sustained, mellow textures of the voice and strings were replaced by the more percussive, slowly decaying sounds of the piano.

A swirling arrangement of a tango by Astor Piazzolla was followed by György Kurtág’s Sonatina, arranged from Bach’s Cantata No. 106.

The concert closed with two contrasting pop song arrangements by Anderson and Roe: an almost religious setting of Leonard Cohen’s iconic anthem Hallelujah, and an outstanding jazz/gospel version of Lennon and McCartney’s 1970 hit Let It Be. The duo really “took us to church” with their virtuosic, almost hallucinatory gospel riffs, with scales and arpeggios galore.

Of the two encores, the first was a masterpiece of showmanship: an over-the-top arrangement of Leonard Bernstein’s “America” from West Side Story. Anderson and Roe were not only playing on the keyboard, but tapping the rhythms on the piano (and on themselves at times). In the middle of the proceedings they moved from playing one piano to two, for a brilliant closing tour de force.

END_OF_DOCUMENT_TOKEN_TO_BE_REPLACED

The strings-only work by Berg has made relatively frequent appearances on the Orchestra’s programs. In 2021, the musicians recorded it for the In Focus series, and it appeared again on last year’s European tour. Friday’s rendition maintained the group’s characteristic light and effortless playing, each section blending as much as possible to echo the work’s original form as a string quartet. At fifteen minutes total, the piece is quite short, but the dense encoded musical meanings require some extra-attentive listening. Splitting up the three movements ensured that each one could be appreciated on its own. END_OF_DOCUMENT_TOKEN_TO_BE_REPLACED