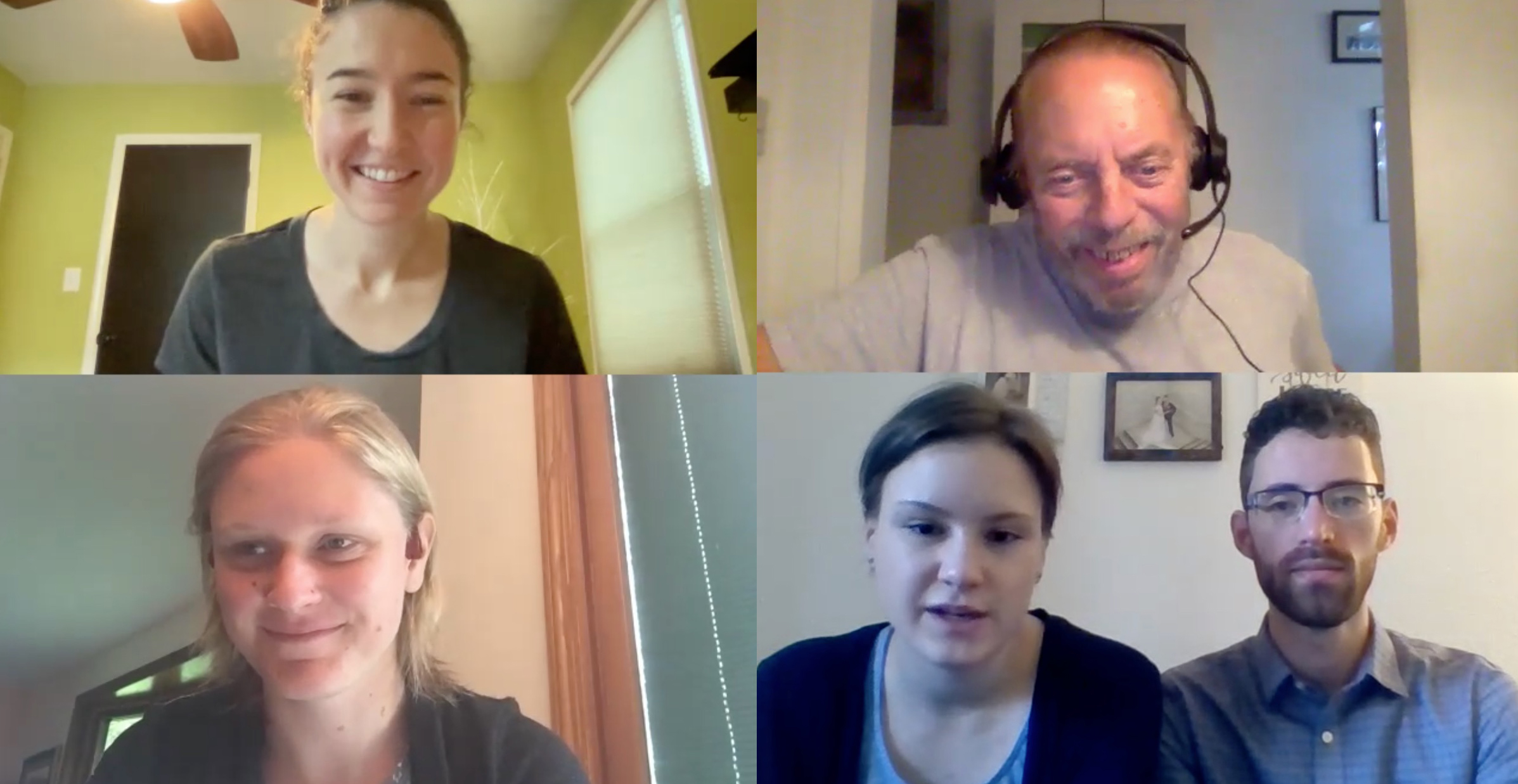 UPDATE: Due to weather conditions, this concert will move indoors at 7:00 pm at the Solon Center for the Arts. 6315 SOM Center Road, Solon.

Almost a year to the day, the Callisto Quartet, formed in 2016 at the Cleveland Institute of Music, will return to the scene of their 2020 concert in Solon Community Park for a second al fresco performance. On Friday, July 16 at 7:00 pm, violinists Paul Aguilar and Rachel Stenzel, violist Eva Kennedy, and cellist Hannah Moses will play Haydn and Beethoven in a free, open air concert.

The event, presented again this year by Chagrin Arts in cooperation with the City of Solon, will relax most of the COVID protocols that were in place last year, but audience members should still bring their own lawn chairs or blankets and refreshments.

The Callisto have just completed a two-year appointment as graduate quartet in residence at the Shepherd School of Music at Houston’s Rice University, and will take up a similar position at Yale in September. I reached them via Zoom to catch up on their activities and plans.

Daniel Hathaway: Where am I finding you all at the moment?

DH: And you’re all headed for New Haven in September, which sounds like a tremendous opportunity.

DH: What will your duties be at Yale?

Hannah: We’ll be mentored by the Brentano Quartet. We love them — they’re wonderful. We’ll also be doing quite a lot of coaching of undergraduate quartets. 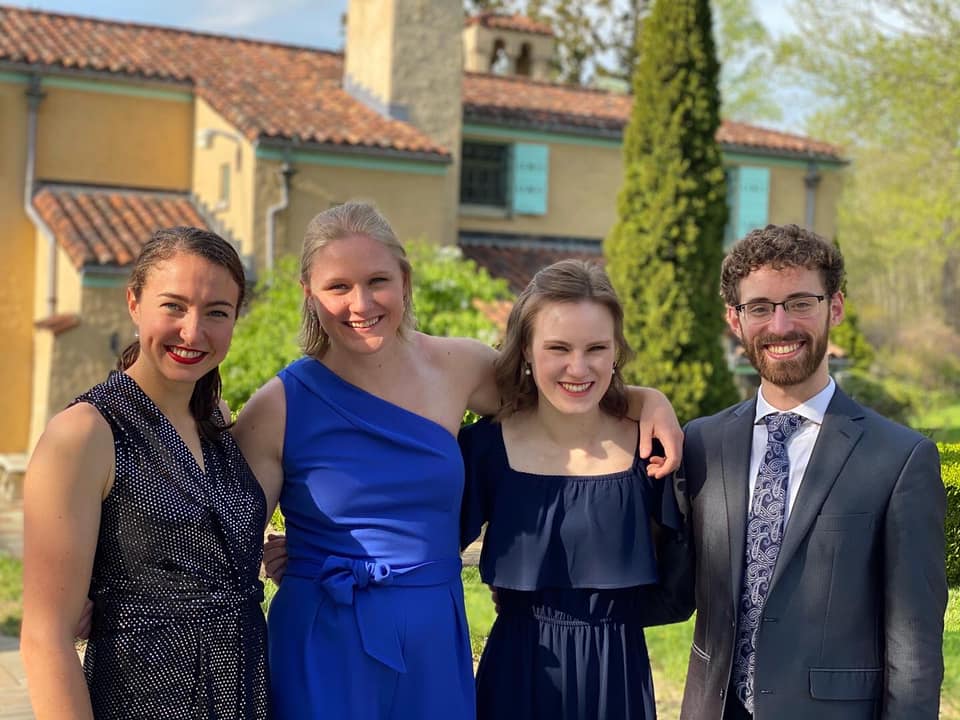 DH: What did you have to go through to land this position?

Eva: We did have to audition for it. It was a little bit different this year, because all the auditions were held online. So we sent in videos and interviewed over Zoom as a quartet, like we’re doing now.

DH: Will you come out of this with a degree?

Eva: It’s not actually a degree program. We’ll be visiting fellows, so we don’t have any coursework or things like that. The program is really designed for us to be able to focus on rehearsing, performing, traveling for concerts, and teaching.

DH: What were some of your other options for this coming year?

Eva: I think that wherever we go we intend to keep teaching and performing as much as we can, both in and around the area where we live, and around the country and the world. 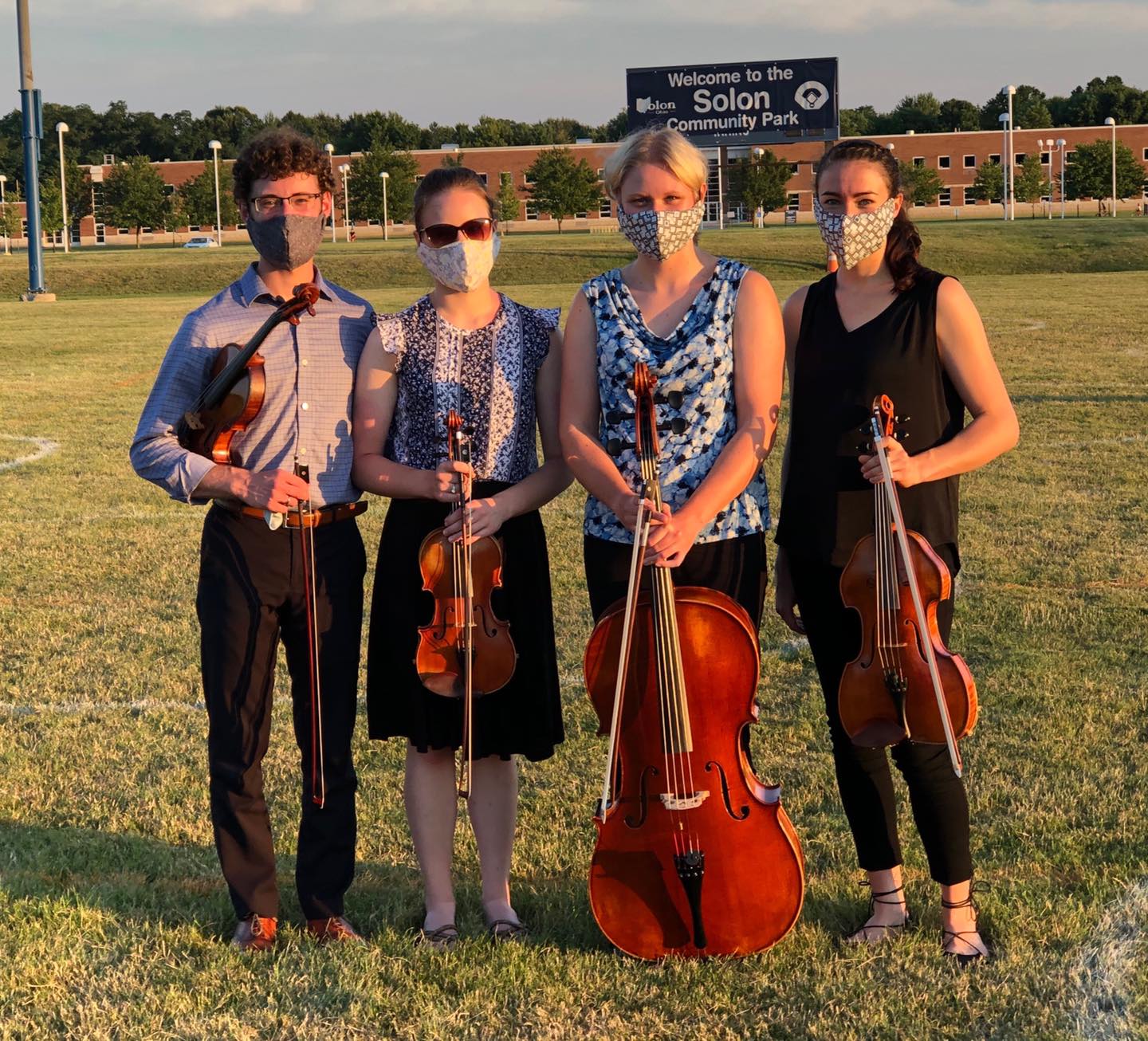 DH: How did that concert go over last year on the ball diamond?

Hannah: I think that was the first in-person concert we’d had, albeit outdoors, since the pandemic started. It was a real experience playing for a live audience then, and a year later, I think we’re in the same boat of being very grateful to have people be able to come and hear live music and interact with us.

Paul: We’re really thrilled to be coming back. It was a wonderful audience — and quite a big one. Everyone was so excited about it that we’re really looking forward to next Friday. It’s going to be awesome.

DH: Did you play any live performances during the last year?

Paul: We did. And we’re very grateful that things are beginning to pick up again.

Hannah: So happy to be playing for people again. We really missed live music. There’s just nothing like the feeling of audience/performer interaction and the exchange of that kind of energy. I don’t think we’ll ever take it for granted again.

DH: Have you played masked? And how did that feel?

Eva: It was really hard to get used to at first. It wasn’t so much a burden for us as it might have been for the audience.

DH: What’s on the program this time?

Rachel: We’re starting with Haydn’s Op. 20, No. 1 Quartet, which really begins the classic canon of string quartets. Then we’ll be doing the beloved crowd-pleaser, Beethoven’s Op. 59, No. 3, with that glorious fugue for the last movement.

Eva: I think this fugue holds a special place in the repertoire. It’s unbelievably joyful and exuberant. I think that from beginning to end, it just puts a smile on your face. We really enjoy performing it, and we can’t wait to share it with the audience.

DH: You know that wisecrack about a fugue being a piece where the voices enter one by one and the audience leaves one by one?

Paul: I don’t think the audience will be leaving during this fugue. (Laughter). We’ve played it several times over the past few months, and after those two chords at the end, the response of the listeners reminds us how great it is to have a live audience.

DH: Will you have sound reinforcement?

Hannah: Yes. Last time we had little instrument mics, which worked well. We got lucky with the weather last time, and hopefully the rain will have moved out of the area and it will be a nice evening for a concert. Fingers crossed!

DH: And hopefully the humidity will have let up. But you must be used to that in Houston.

Eva: Actually, we’ve never played an outdoor concert in Houston, which is fortunate.

DH: What’s on your dance cards for this fall?

Rachel: We’ll be playing this same program in Saugatuck, Michigan right after Cleveland. Then moving to Yale and working with the students there will take up a good chunk of our time. We’re also looking at a couple of trips to Germany and Austria, as well as a teaching residency in Greenville, and a couple of concerts in the Greenville area.

Paul: We hope to be back in full swing!

END_OF_DOCUMENT_TOKEN_TO_BE_REPLACED

Rodgers & Hammerstein’s Cinderella was originally produced for television in 1957 — seven years after the animated Disney film was released — and starred Julie Andrews. According to the Rodgers & Hammerstein website, it was viewed by over 100 million people. END_OF_DOCUMENT_TOKEN_TO_BE_REPLACED

The story line has its origin in an 1855 play and an 1842 farce that Thornton Wilder mined for his 1938 play The Merchant of Yonkers. When that turned out to be a flop, in 1954 Wilder made the crucial decision to re-center the show around the character of the legendary marriage broker Dolly Gallagher Levi and renamed it The Matchmaker. END_OF_DOCUMENT_TOKEN_TO_BE_REPLACED

The Dodero Center for the Performing Arts at the Gilmore Academy in Gates Mills is one feature of an impressive campus. The auditorium is shallow, the stage is deep, and the ensemble played without a shell. Throughout the program, the sound, especially in instruments’ lower registers, tended to disappear. END_OF_DOCUMENT_TOKEN_TO_BE_REPLACED