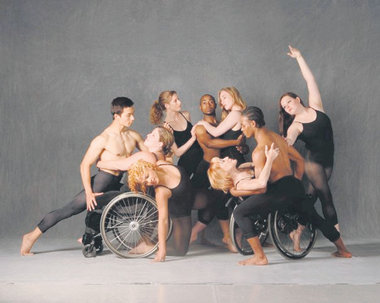 In Classical mythology, Terpsichore, the daughter of Zeus and Mnemosyne, is the Muse of Dance. On November 21, she was present at Umstattdt Performing Arts Hall, in all her poetic vivacity, for a magnificent performance by the Canton Symphony Orchestra (CSO).

Commemorating the 25th anniversary of the Americans with Disabilities Act (ADA), the CSO partnered with Dancing Wheels Company & School for two of the works on the program. Dancing Wheels was founded in 1980 by Mary Verdi-Fletcher, the first professional wheelchair dancer in the U.S. Her company integrates the talents of dancers with and without disabilities, and is considered one of the premier arts and disabilities organizations in the U.S. today.

In his opening remarks about the program, Maestro Gerhardt Zimmermann explained that the theme of the evening, “Walls of Glass,” was a metaphor for the societal obstacles and prejudices faced by the physically disabled. He assured us that we were “…in for a very emotional ride.”

Indeed, beginning with the Adagietto movement for harp and strings from Gustav Mahler’s Symphony No. 5, the orchestra was wholly gripping in its emotive power — as it was throughout the entire program. The strings wove a velveteen tapestry threaded through with brilliant shimmering from the harp. This most beautiful of wordless love songs is replete with heartrending crescendos, and suspended moments of both joyous and bittersweet sighing. It was an altogether arresting backdrop for the dancers as they moved about the stage in front of the orchestra.

The dance was choreographed by Bobby Wesner, co-founder and artistic director of Neos Dance Theatre. His movement design combines balletic grace and formality with a distinctly modern sensuality. The upright dancers — in duet, trio, or quartet configurations — were mesmerizing as they executed breathtaking lifts and sinewy leaps. Meanwhile, the dancers in wheelchairs seemed to simultaneously float on air and glide magically along the stage with their stand-up partners. They were a poignant reminder that dance is as much a matter of moving the human spirit as it is one of unfettered feet. And like the harp in the music score, they were an impassioned embodiment of wistful yearnings and warm embraces.

Wesner’s choreography for the thrilling second work on the program exuded the same sense of fervent connectivity between wheelchair and stand-up dancers, though with even more emotional impact. This was the world premiere of Symphony llll, Lightfall, by American composer Stephen Melillo. Scored for full orchestra, the work is in three movements and was commissioned by Gerhardt Zimmermann for this occasion.

The thematic scope of Lightfall is well-captured in Melillo’s words, “In Dedication to: Those who forever choose to look up and embrace the wonder-filled Universe and the Joy of Life.” It is a marvelous object lesson in blending Romantic classicism with contemporary, even cinematic sensibilities. From the brassy chaos and thunder of the first movement to the haunting lyricism of the second and the triumphal optimism of the finale, there is a kinship in Melillo’s writing to Mahler’s penchant for fusing the sublime with the banal, the ethereal with the mundane.

Additionally, Melillo’s robust invocation of victory over adversity was an especially appropriate fit with the themes of cathartic love and apotheosis so powerfully articulated in the evening’s final selection, Tchaikovsky’s Symphony No. 5. Here was the CSO at its electrifying best.

Interestingly though, for all of the compelling aural artistry provided by the orchestra during its most riveting offering in recent memory, what lingers is the image of the dancers at the end of Lightfall. As they stood at the foot of the stage, they mimed running their hands across a vast pane of glass, feeling their way, as it were, toward an opening. They found it — a window on the fiery, indefatigable soul of Terpsichore.

Supported by engagingly, yet simple staging by Cara Consilvio, a well-prepared cast of singers told the archetypal story of Cinderella with charm and flair. Framing the production was  a sparse but colorful set and wonderful lighting by Dave Brooks. END_OF_DOCUMENT_TOKEN_TO_BE_REPLACED

END_OF_DOCUMENT_TOKEN_TO_BE_REPLACED

The music isn’t easy to play, either. Over the course of two hours, all of the musicians brought fantastic focus to the unrelenting tricky rhythms and countless layers of parts, all of which require a high level of individual responsibility. Even in the moments of calm, the accompaniment remains perpetually unsettled. Adams — who made a sprightly presence on the podium — combines minimalist, repeating motives in gradual layers, which eventually become so dense they overwhelm the senses. Lisa Wong deserves special mention for her thorough preparation of the Cleveland Orchestra Chorus, as does Jennifer Rozsa for the Children’s Chorus, which made a brief but memorable appearance in the last few minutes. END_OF_DOCUMENT_TOKEN_TO_BE_REPLACED