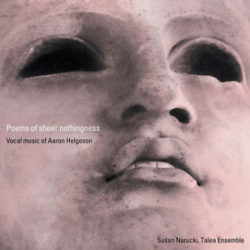 The titular work sets old Occitan lyric poetry from the age of the troubadours (1100-1350 C.E.) — a language still spoken by a small population in southern France.

I’ll make a poem of sheer nothingness:
not of me nor of any other,
not of love nor of youth, nor of anything else;
Because it was composed while dreaming on a horse.

Narucki sings the texts in the original Occitan, and while the poems are somewhat impenetrable on first glance or hearing, the music is anything but. Helgeson uses sparse textures, expansive silences, and small fragments of lyricism to bring the verses to life, and he is eminently successful.

None of the five songs is particularly long — they average only about seven minutes of music. But within each, Helgeson creates a fully realized microcosm of mood and atmosphere. The desolate keening of the first song contrasts with the creepy skittering of woodwinds and piano in the second.

When the voice enters around the five-minute mark in the third, it joins the piano in an aggressive, static pulsing, at odds with the smooth, contemplative string passages that precede and follow the poetry. The light, cheerful burbles of the woodwinds in the fourth track provide a foil to the sleepy, sustained qualities of the final song, which fades slowly to imperceptibility, leaving the listener straining to hear something in the “nothingness.”

A line in the fourth poem reads, “The more you listen, the better it will be.” This is certainly true of the music. Each song has an ethos of its own, and the miniature sound worlds of Poems of sheer nothingness are well worth exploring.

The performance is excellent. Narucki and the Talea Ensemble collaborate flawlessly, and all of the musicians are in complete control of their artistry. The many extended techniques in Helgeson’s music — strange gurgles, swooshes, and scrapes — sound like some of the most natural sounds you could coax from a bass clarinet, flute, or violin.

The second work on the album, Notes on a page (of Sappho), sets fragments of text by the Greek lyric poet (630-570 B.C.) as translated by Anne Carson in her 2003 book If not, winter. In the liner notes, Helgeson writes that he wanted to work with Carson’s translation ever since reading it. “What’s unusual about it is that it’s not just a translation of words, it’s a translation of the experience of looking at the fragments themselves — faded text on scraps of papyrus, a few painted phrases among a group of dancing figures on remnants of an urn, isolated examples of the subjunctive uttered by ancient grammarians.”

After the clear text setting of the first piece, Notes on a page might sound jumbled and disorganized, but this is because Helgeson is setting snippets of text. Every time an idea begins to cohere, the composer jaunts in another direction altogether, a stream of consciousness inspired by Sappho’s disjointed phrases. Once again, Narucki and the talented Talea Ensemble perform with distinction. Poems of sheer nothingness is available on iTunes, Amazon.com, and from other retailers.

Franz Welser-Möst led the final bows on Saturday night at Severance, like the star of any show should. The Cleveland Orchestra’s music director is in his element presiding over the ensemble’s annual opera production, which this season packs the drama. Verdi’s Otello — in a concert staging that opened May 21 and runs for two more performances (May 26 and 29) — demands big voices, instrumental forces to match, and a conductor who can give it all shape and direction. END_OF_DOCUMENT_TOKEN_TO_BE_REPLACED

The cimbalom was the feature of the show, an instrument capable of taking on many personas. Its performer, Chester Englander, has shaped his career around the instrument, and has inspired composers to write more repertoire for it, some of which was presented on the program. END_OF_DOCUMENT_TOKEN_TO_BE_REPLACED

You wouldn’t expect that acoustic from a glance at the nave, which is wide and long, but not especially lofty. But when I guest conducted a local amateur choir and professional orchestra in Beethoven’s Mass in C there a few years back, during the first rehearsal we released the final chord of the “Gloria” and listened in astonishment for the next several seconds. The sound continued to roll down the space like the big wave that surfers dream about. END_OF_DOCUMENT_TOKEN_TO_BE_REPLACED