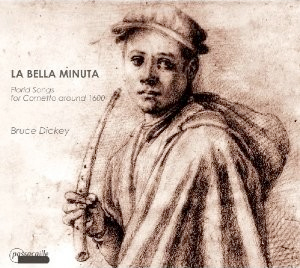 To help show off those features of the instrument — fingered like a recorder but played by vibrating the lips against a small, cupped mouthpiece — Dickey has assembled a winning team of musicians, including organist Lieuwe Tamminga, viol players Claudia Pasetto, Leonardo Bortolotto and Alberto Rasi, and harpist Maria Christina Cleary, and got permission to take over the private chapel of the Este court, the Basilica Palatina of Santa Barbara in Mantua, for a week for rehearsing and recording. That church, “conceived and built, it is said, with music in mind…for a court in which music played an enormous role,” (liner notes) also houses a Graziadio Antegnati organ from 1565 (restored in 2006 by Giorgio Carli) which contributes handsomely to the musical proceedings. 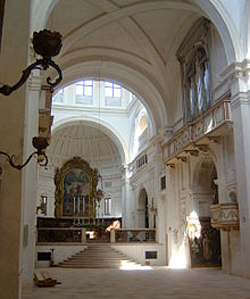 Though Bruce Dickey has made scoring distinctions between sacred and secular works by choosing organ for the former and viols and harp for the latter, he brings a pure, liquescent tone, elegant phrasing, lively articulation and impressive fingerwork to both styles of music. That and good taste. Dickey quotes — and follows — Dalla Casa’s advice about ornaments: “not much, but make it good.” 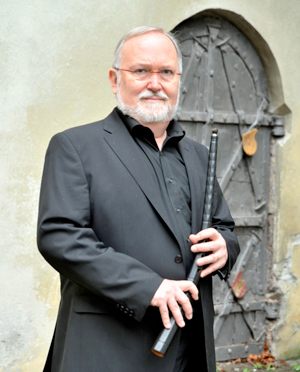 Dickey composed original divisions for two of the works. In Josquin’s Mille regretz, he contrasts two approaches to ornamentation, the first in the style of Sylvestro Ganassi, then after a harp version of the chanson, another in the style of Giovanni Bassano. A second Dickey contribution is his divisions on Palestrina’s Nigra sum, more in the late sixteenth century manner. These details will be of primary interest to scholars and early instrumentalists, while the rest of us can just luxuriate in Dickey’s fluent elaborations, some of which (Palestrina’s Quanti mercenarji — aka Io son ferito) ascend into the stratosphere while others (Luzzaschi’s O primavera) pay homage to the vocal prowess of the ladies of the court of Ferrara.

Dickey’s decision to strip the instrumentation down to cornetto and harp for Luzzaschi’s O primavera provides a lovely, mid-disc contrast. Adding further to the variety of the recording are three solo organ pieces played by Lieuwe Tamminga. Guami’s cheerful La Guamina builds incrementally in registration to a bracing tutti. Trabaci’s Durezze et Ligature, brings 16-foot pitch and the voce umana stop into play, while his Consonanza stravaganti takes mischievous delight in the instrument’s meantone tuning. In addition to masterful solo playing, Tamminga lends fine support to the cornetto both in polyphonic and continuo roles, reinforcing the notion that the two instruments were made for one another. Harp and gambas are ingratiating accomplices as well.

Adrian von Ripka’s recording is at once spacious and intimate, giving the listener the feel of the room while preserving the very intimate human sounds of breathing and the gentle clicking of the organ action. This is a disc that connoisseurs will be eager to own and lovers of Renaissance music will cherish for its beautiful musical values.

END_OF_DOCUMENT_TOKEN_TO_BE_REPLACED

Rodgers & Hammerstein’s Cinderella was originally produced for television in 1957 — seven years after the animated Disney film was released — and starred Julie Andrews. According to the Rodgers & Hammerstein website, it was viewed by over 100 million people. END_OF_DOCUMENT_TOKEN_TO_BE_REPLACED

The story line has its origin in an 1855 play and an 1842 farce that Thornton Wilder mined for his 1938 play The Merchant of Yonkers. When that turned out to be a flop, in 1954 Wilder made the crucial decision to re-center the show around the character of the legendary marriage broker Dolly Gallagher Levi and renamed it The Matchmaker. END_OF_DOCUMENT_TOKEN_TO_BE_REPLACED

The Dodero Center for the Performing Arts at the Gilmore Academy in Gates Mills is one feature of an impressive campus. The auditorium is shallow, the stage is deep, and the ensemble played without a shell. Throughout the program, the sound, especially in instruments’ lower registers, tended to disappear. END_OF_DOCUMENT_TOKEN_TO_BE_REPLACED