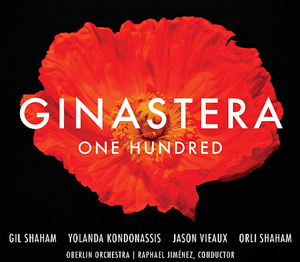 In a newly released all-Ginastera album, a single element unifies four distinct compositions, four different instrumental groupings, and four different decades of Ginastera’s creative output: the gaucho chord. Gauchos are Argentine cultural figures, South American cowboys renowned for their skill with a guitar. Their namesake chord is a nontraditional harmonic construction: it comprises only perfect fourths instead of major and minor thirds, just like a strummed gaucho guitar.

Devotees of Ginastera’s music celebrated the late composer’s centennial in April of this year. Around the world, a rush of affection for the Argentine master’s music has inspired concerts, scholarships, and recordings, including Ginastera: One Hundred, released by Oberlin Music and distributed through Naxos on October 14. The recording runs just over 55 minutes and includes the Harp Concerto (1956, revised in 1968), Pampeana No. 1 for violin and piano (1947), the Sonata for Guitar (1976), and the Danzas Argentinas for solo piano (1937). The performers are Yolanda Kondonassis (harp), Gil and Orli Shaham (violin and piano, respectively), Jason Vieaux (guitar), and the Oberlin Orchestra, led by Raphael Jiménez. The album is a masterpiece.

Kondonassis’s playing in the concerto is rhythmically exact, yet passionate. It is mesmerizing. It is also quite shockingly clear; listeners familiar with this work will know that balance in a live performance is always an issue. This becomes a moot point in an acoustically engineered recording, however, when the balance can simply be adjusted to favor the harp. Kondonassis plays with pristine abandon, and Jiménez and the Orchestra anchor the work with a rock-steady rhythmic pulse. During a couple of the more melodically flowing passages in the second movement, the strings are not quite perfectly together, but otherwise it’s an impressive display.

The Shahams are two of the most inspiring performers of our day, and their performance on this album simply adds another feather to what must be an already heavily-plumed cap. Much of Ginastera’s music involves some sort of tension. Not just melodic or harmonic tension (though this was exquisitely teased out by the siblings in Pampeana No. 1), but also between folk music and modernism, and between nationalism and artistic autonomy. The gaucho chord is an excellent example of this tension. Is it a throwback to another time, a display of cultural fluency? Or is it simply another nontraditional harmony employed during the 20th century, an adaptation of a folk figure into something quite new?

Or is it both? It is prominent in the final movement of the Harp Concerto. It is present in the lachrymose opening cadenza of the Pampeana. And it closes the first of the Danzas Argentinas with a touch of nostalgia. (Ginastera’s youth and vivacity are audible in these dances, and Orli Shaham delivers all three with flair.)

The gaucho chord also features in all three movements of the Sonata for Guitar. Composed later in his career, the sonata evidences many of Ginastera’s more modernist leanings, seemingly at odds with his reliance on such a recognizably ethnic tonal scheme. He rationalizes this metaphysically when discussing the issue with his biographer — which is to say, he really doesn’t. Certainly though, his treatment of the chord is more adventurous in this later work, and Jason Vieaux’s playing captures the ear with equal parts charisma and wistfulness. Like the other soloists, Vieaux is at the top of his field, and he ties the album’s performances together with uncanny skill, even as the gaucho chord ties the different works together. A wonderful overview of Ginastera’s music, Ginastera: One Hundred is available for purchase via iTunes, Amazon, and other retailers.

END_OF_DOCUMENT_TOKEN_TO_BE_REPLACED

Rodgers & Hammerstein’s Cinderella was originally produced for television in 1957 — seven years after the animated Disney film was released — and starred Julie Andrews. According to the Rodgers & Hammerstein website, it was viewed by over 100 million people. END_OF_DOCUMENT_TOKEN_TO_BE_REPLACED

The story line has its origin in an 1855 play and an 1842 farce that Thornton Wilder mined for his 1938 play The Merchant of Yonkers. When that turned out to be a flop, in 1954 Wilder made the crucial decision to re-center the show around the character of the legendary marriage broker Dolly Gallagher Levi and renamed it The Matchmaker. END_OF_DOCUMENT_TOKEN_TO_BE_REPLACED

The Dodero Center for the Performing Arts at the Gilmore Academy in Gates Mills is one feature of an impressive campus. The auditorium is shallow, the stage is deep, and the ensemble played without a shell. Throughout the program, the sound, especially in instruments’ lower registers, tended to disappear. END_OF_DOCUMENT_TOKEN_TO_BE_REPLACED