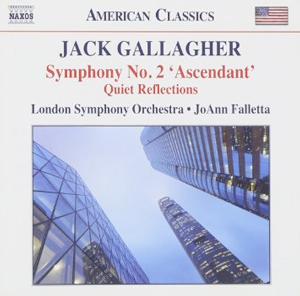 Jack Gallagher’s second symphony, now recorded by JoAnn Falletta and the London Symphony Orchestra in Blackheath Hall and released on the Naxos label, is a signal achievement. The composer, who is professor of music at The College of Wooster, has crafted a resplendent, hour-long work that scarcely flags in energy, never wants for inventive themes, and uses all the resources of the modern symphony orchestra with skill and ingenuity.

In his liner notes, Gallagher refers gratefully to his early career as a trumpeter in the National Orchestral Association Orchestra under John Barnett and Leon Barzin, where he learned 20th century repertoire from the best vantage point possible — inside the ensemble. He mentions being exposed to iconic works by Shostakovich, Rachmaninoff, Holst, Hindemith, Ravel, Bartók, Mahler, Mussorgsky (via Ravel), and Britten, which might lead the listener to comb through Symphony No. 2, ‘Ascendant’ with a checklist in hand, looking for influences here and there.

That would be a fool’s errand. Composers always learn something from other composers, but the best achieve their own synthesis of music that has moved and affected them. That is one of the secrets behind what makes Gallagher’s symphony work. His music sounds like his own creation, but there is a clear sense of psychic connection with what has gone before. If his second symphony isn’t revolutionary in its use of form, themes, or harmonic language, it’s certainly fresh in its sound and leaves the listener with the sense of having heard something important (but not pretentious), beautiful (but not pandering), and ingenious (without requiring a lecture in music theory to tell you why).

Does the symphony have a story line? Only vaguely. Gallagher writes, “‘Ascendant’ refers, in addition to the upward-leaping gesture at the work’s opening, to elevated aspirations of the human spirit. My hope is that an ethos of striving may be perceived as central to the work.”

Indeed, the tension between triumph and struggle is a dichotomy that helps give the work vigor and direction while not overplaying that theme in hyper-Romantic fashion. The symphony is suffused with positive musical ions, and if the mood briefly turns dark, cheerfulness is never that far away.

Formally, Gallagher links his symphony together through recurring musical gestures. The horn section announces the first movement with an arresting flourish and some twenty minutes later, wraps it up with material that almost sounds like the beginning. Exotic wind solos serve as similar tonal oases in slower sections. The second movement “scherzando” has a palindromic structure that operates subliminally on the listener’s memory. That first movement horn flourish comes back at the beginning of the finale, a movement that ends in a dazzle of brass. 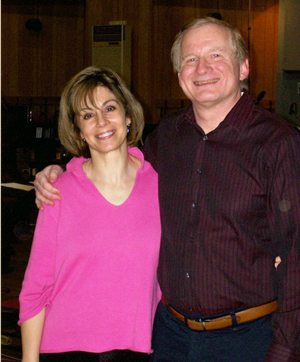 Jack Gallagher’s good taste is apparent throughout the piece — in the shape of his themes, the economical skill of his orchestrations, and the subtlety with which he manages musical forms. If there’s anything worth quibbling about, it might be the length of the slow (third) movement, which loses a bit of momentum, or the composer’s tendency to use non-thematic swooshes and other busywork in winds and strings to keep the energy flowing in isolated spots.

Gallagher’s earlier Quiet Reflections completes the disc. More closely related to a number of mid-20th century reflective pieces, Reflections is perhaps ,less original, but should be attractive especially to college and community orchestras — like the Wooster Symphony, for whom the 12-minute work was written in 1996.

JoAnn Falletta leads tight performances of both works with the London Symphony, an ensemble Gallagher rightly lauds for the “color and vitality” he first heard from them in a recording of Petrouchka when he was in high school. Those qualities are still in place, and engineer Philip Rowlands and producer Tim Handley have made sure that this recording shows the orchestra off with transparency and presence. The many wind and brass solos are elegantly played, and flaws due to under-rehearsal are small and few.

American symphony orchestras should make haste to program Gallagher’s second symphony. It’s a fine piece of music that should resonate with audiences far more successfully than the soundscapes or the cinematic knockoffs that often find their way onto 21st century symphonic stages. Think of it as Mahler without neuroses. What an attractive idea!

The cimbalom was the feature of the show, an instrument capable of taking on many personas. Its performer, Chester Englander, has shaped his career around the instrument, and has inspired composers to write more repertoire for it, some of which was presented on the program. END_OF_DOCUMENT_TOKEN_TO_BE_REPLACED

You wouldn’t expect that acoustic from a glance at the nave, which is wide and long, but not especially lofty. But when I guest conducted a local amateur choir and professional orchestra in Beethoven’s Mass in C there a few years back, during the first rehearsal we released the final chord of the “Gloria” and listened in astonishment for the next several seconds. The sound continued to roll down the space like the big wave that surfers dream about. END_OF_DOCUMENT_TOKEN_TO_BE_REPLACED