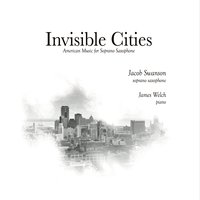 Saxophonist Jacob Swanson has become a familiar face on the Cleveland music scene. Audiences have come to know his artistry through outstanding performances with his longtime collaborator Sarah Marchitelli (Jake & Sarah) on Trinity Cathedral’s Brownbag Concert series. In recent years, the Duo has also appeared on Lorain County Community College’s Signature Series and at the Bop Stop as members of the Decho Ensemble. On his recently released CD — Invisible Cities, American Music for Soprano Saxophone — Swanson reveals himself as a soloist of impeccable taste.

During the six works featured on the album, Swanson reminds us what a beautiful instrument the soprano saxophone is. He performs with a handsome tone, flawless technique, and great musical sensibilities. The partnership between Swanson and pianist James Welch is superb. This is not just a recording for your collection, but one to be added to your “favorites” playlist.

Nathan Hall’s five-minute-long Invisible Cities (2008) is a highlight. The work was inspired by a poem-novel of the same name by Italo Calvino in which the author imagines Marco Polo and Genghis Kahn describing their travels and dreams to each other. The melody, taken from the traditional Syrian lullaby Ainte, is exotic in its harmonic structure. Beginning slowly, Invisible Cities evolves into a whirling dance, finally ending with piano in the lowest range and the saxophone in the very high “altissimo” range, which Swanson plays splendidly.

At 22 minutes, Eric Ewazen’s Down a River of Time is the longest work on the album. Ewazen, a Cleveland native, originally composed the piece for oboe and strings in 1999, but the melodic, neo-Romantic work fits the soprano sax like a glove. During the three movements, Swanson becomes the storyteller as he takes listeners through the process of losing a loved one, and to the ultimate joy that their memories bring.

Everett Gates’ Incantation and Ritual (1963) is entirely based on a scale derived from Scriabin’s “Mystic Chord.” Written for Carina Raschèr, the brief, four-minute-long composition for solo soprano saxophone is a little gem, and Swanson makes it shine.

Engaging sonatas by Ronald Caravan and Lawson Lunde, along with Walter Hartley’s Diversions for Soprano Saxophone and Piano, round out this most enjoyable CD.

Recorded at the State University of New York at Fredonia by Tim Bausch, the sound quality and balances between the soprano sax and piano provide an excellent listening experience. The CD is available on Jacob Swanson’s website, CD Baby, and Amazon.com.

END_OF_DOCUMENT_TOKEN_TO_BE_REPLACED

Franz Welser-Möst led the final bows on Saturday night at Severance, like the star of any show should. The Cleveland Orchestra’s music director is in his element presiding over the ensemble’s annual opera production, which this season packs the drama. Verdi’s Otello — in a concert staging that opened May 21 and runs for two more performances (May 26 and 29) — demands big voices, instrumental forces to match, and a conductor who can give it all shape and direction. END_OF_DOCUMENT_TOKEN_TO_BE_REPLACED

The cimbalom was the feature of the show, an instrument capable of taking on many personas. Its performer, Chester Englander, has shaped his career around the instrument, and has inspired composers to write more repertoire for it, some of which was presented on the program. END_OF_DOCUMENT_TOKEN_TO_BE_REPLACED