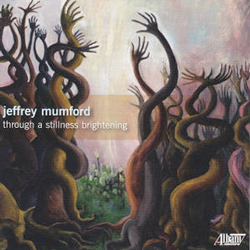 With a catalogue of works as robust as that of celebrated American composer Jeffrey Mumford, the task of selecting a group of compositions to be featured on a recording could be quite daunting. Happily, on his recently released two CD set titled though a stillness brightening on the Albany Records label, Mumford has painstakingly chosen ten selections that highlight his prowess as a composer.

In his introduction to the CD, writer Christian Carey notes that “Jeffrey Mumford’s music is filled with counterpoint. Whether written for large ensembles or intimate chamber forces, it features a counterpoint of melodic lines – and a counterpoint of ideas… Through the use of a wide range of dynamics and articulations, they embody a number of moods.” Carey’s words perfectly describe the ten works featured on this recording – colorfully nuanced, layered musical motives are abundant.

A student of Elliot Carter, Mumford is currently Distinguished Professor at Lorain County Community College (LCCC). Throughout his career he has been the recipient of numerous fellowships, grants, awards and commissions including the Academy Award in Music from the American Academy of Arts & Letters. Prior to his appointment at LCCC he served as assistant professor of composition and Composer-in-Residence at the Oberlin College Conservatory of Music as well as Artist-in-Residence at Bowling Green State University.

Jeffrey Mumford has received commissions from many orchestras, ensembles and soloists of note including the Sphinx Consortium, the Cincinnati Symphony, the National Gallery of Art/Contemporary Music Forum VERGE Ensemble, the Argento Chamber Ensemble, Ole Bohn, the Haydn Trio Eisenstadt (Vienna), the Network for New Music, The Cleveland Orchestra, and the Chicago Symphony Orchestra. Through these professional relationships many artists have become champions of his music.And it is in the extraordinary performances that though a stillness brightening truly succeeds. After all, it is the musicians that bring a composer’s music to life, and the musicianship of each and every interpreter on this CD is outstanding.

With a running time of nearly 95 minutes, the CD includes works for solo cello solo piano, solo viola and solo violin; duets for flute and piano & viola and bass; a string quartet; and three works for soloist with ensemble. Mumford’s own informative liner notes offer personal insights into each selection.

The majority of tracks are taken from live performances, which adds greatly to the listening experience. However it is the performances that were given during Mumford’s 2013 residency at the National Gallery of Art that are standouts.

Violinist Miranda Cuckson’s account of an expanding distance of multiple voices (2005) is completely captivating. The composer’s two rhapsodies for cello and strings (2009-10, revised in 2013) revisiting variazioni elegiaci … within the fabric of caressing air and echoing fields…. spreading light, are beautifully performed by cellist Julia Bruskin and the National Gallery Chamber Players under the direction of conductor Peter Wilson. The artistic skill of the Avalon Quartet is on full display during in forests of evaporating dawns (1996). Those three works were recorded live at the West Garden Court of the National Gallery, John Conway recording engineer.

Other live performances include through a stillness brightening (2011), a chamber concerto commissioned by the Argento Ensemble and written for violinist Miranda Cuckson, who performs the work brilliantly. Conductor Michel Galante leads the well polished Argento Ensemble. The track was recorded live in April of 2011 in the Leonard Nimoy Theatre at Symphony Space in New York (Matthew Galek was the recording engineer).

Described by the composer as a mini concerto, through the filtering dawn of spreading daylight (2001) is scored for viola and bass. Cleveland Orchestra members Eliesha Nelson, viola, and Scott Dixon, bass, give such a convincing account of the work that one wonders why more has not been written for this unique paring of instruments. The track was recorded in November of 2011 during a live performance in the Studio Theatre at Lorain County Community College in Elyria (Clive Svetlik, recording engineer.)

Studio recordings include another exceptional performance by cellist Julia Bruskin during To find in the glimmering air….. a buoyant continuity of layering blue (2010), recorded in September of 2013 at the Oktaven Studios in New York (Ryan Streber, engineer). Flutist Christina Jennings and pianist Lura Johnson offer up a first rate performance of an evolving romance for flute and piano (2005). Lasting a mere 5:13 minutes, the work is inspired by Mumford’s fascination with the transparent musical characteristics of mid-twentieth century American Neo-classicism. The track was recorded in Britton Recital Hall at University of Michigan (Andrew Jennings, engineer) and originally released on the Concert Artist Guild label. Violist Wendy Richman sounds superb during wending (2001) for solo viola. The track was recorded in 2001 at Sonic Temple (Antonio Oliart, recording engineer) and released on the Albany Records label.

Pianist Winston Choi’s heartfelt renditions of two Elliot Carter tributes, for Elliot (1983),written for the celebration of Carter’s 75th birthday, and a celebration of Elliot Carter (2006), commemorating his 100th birthday as part of the Ten for Carter music series of the Philadelphia-based Network for New Music, fittingly pay homage to Mumford’s teacher and mentor. The tracks were recorded in September, 2013 at Windy Apple Studios, Chicago (Rob Waller, engineer).

A recording project of this magnitude represents a five-year labor of love on the part of Jeffrey Mumford and the results are well worth the effort. And thanks to some expert mastering by Thomas W. Bethel of Acoustik Musik Ltd., in Oberlin, OH, the recording has a consistent sound quality from beginning to end.

With this work, premiered in 1907, Sibelius offered a bold departure from the explosive emotionalism so prevalent in late-Romantic era music. This symphony was a renewed embrace of Classicism’s purity of form and melody, and one that, oddly enough, left many initial audiences of the day somewhat bewildered. END_OF_DOCUMENT_TOKEN_TO_BE_REPLACED

After eating a Po’boy from The Dawg Bowl Cajun food truck, I caught the first half of Brian Culbertson’s show in The Connor Palace Theatre. END_OF_DOCUMENT_TOKEN_TO_BE_REPLACED