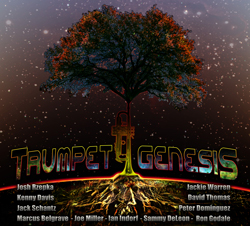 After one listen it was pretty easy to come up with at least one hundred reasons to get a copy of Trumpet Genesis, the latest recording project by Northeast Ohio trumpeter and arranger Josh Rzepka. Consisting of six tracks and a total play time of roughly 39 minutes, this album leaves you wanting, wishing, hoping for more — due in large part to the all-star lineup Rzepka has assembled for the project. Musically speaking, every track of Trumpet Genesis is a lesson in ensemble playing with plenty of great solo work adding just the right spices to each and every tune — all of which were either written or made famous by a trumpeter.

In the well-written liner notes (a bit hard to read, especially for my middle aged eyes), Rzepka says that the inspiration for the album came from the desire to record some tracks with his mentor and Oberlin Conservatory teacher Kenny Davis. After approaching Tri-C’s Crooked River Grove Records about a project that would include Davis, his friend and mentor, pianist Jackie Warren and himself, the project “took off” from there. Rzepka began contacting all the trumpeters and rhythm players who he considered to be musical friends, and above all, mentors. As Rzepka described it in a recent e-mail “I originally proposed the project as a trumpet summit and it grew from two trumpets into the final group of six trumpet players, two pianists, along with bass, drums and percussion.”

The album’s roster of players serves not only as a fantastic documentation of Rzepka’s musical genesis, but also as a testament to the close-knit environment that exists in jazz culture. In addition to Rzepka on trumpet and flugelhorn, the lineup includes Kenny Davis, Marcus Belgrave and Jack Schantz, trumpet and flugelhorn; Joe Miller and Ian Indorf, trumpet; Jackie Warren and David Thomas, piano; Peter Dominguez, acoustic and electric bass; Ron Godale, drums; and Sammy DeLeon, percussion.

Bernard Ighner’s Super Blue (arranged by Thomas) finds trumpeters Davis and Rzepka delivering some fine solo work as well as some laid-back, turned wild ensemble playing with colleagues Indorf and Schantz. Thomas’ piano accents and Godale’s drums keep everything moving along in a nice groove. You can’t help but move your feet during this track.

Jackie Warren’s captivating, Latin-infused arrangement of the Freddie Hubbard soul-fusion classic Red Clay works as the perfect other bookend to the album. The track features great solo work by trumpeters Miller, Rzepka and Davis while Warren’s always classy piano playing coupled with the precision percussion work by DeLeon puts you in the mood to dance. Does it really have to end so soon?

Recorded at Cuyahoga Community College’s Tommy LiPuma Center for Creative Arts in Studio A on October 29, 2012 and January 14, 2013 Trumpet Genesis’s production values are second to none — the sound quality is clear and the balances between solos and the accompanying ensemble are spot on. Josh Rzepka is the executive producer, Jim Metzendorf, recording producer and the recording engineers are Eric Koltnow and Andrew Veres.

END_OF_DOCUMENT_TOKEN_TO_BE_REPLACED

Supported by engagingly, yet simple staging by Cara Consilvio, a well-prepared cast of singers told the archetypal story of Cinderella with charm and flair. Framing the production was  a sparse but colorful set and wonderful lighting by Dave Brooks. END_OF_DOCUMENT_TOKEN_TO_BE_REPLACED