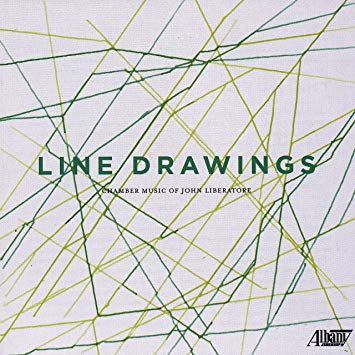 Line Drawings, the title of composer John Liberatore’s new album from Albany Records, refers to the eponymous piano suite that opens the recording. However, the title has a deeper significance. To hear the music on this disc — all “composed in the same way, and in close proximity,” according to Liberatore’s notes — is to feel pulled along at varying speeds in multiple directions, but always forward. The word compelling fails to capture the way this music ventures forth and draws the listener with it. Inviting works better, in every sense of that word.

In the first of the Line Drawings, performed by pianist Ryan McEvoy McCullogh, consonances and dissonances arise and pass in fractions of seconds. Moment-to-moment extremes of range imply contrapuntal lines that turn out not to exist. Relentless yet detail-oriented, McCullogh implies phrases and syncopations within the torrent of notes. The second Line Drawing slows this procedure to a crawl, so the notes bleed together. The third has a balletic agility that recalls Copland, while the restless fourth, an unlikely highlight, takes only 27 seconds to perform. The emotionally blank fifth summons thoughts of a gallery’s white walls, whereas the sixth has the drive and melodic variety of a symphonic finale.

The Mivos Quartet’s rendition of a tree-sprout, a nameless weed — titled after a line in a poem by Margaret Atwood, in which a pioneer fails to find existential comfort in his new surroundings — clarifies Liberatore’s approach. Like Atwood’s protagonist, who searches for meaning but finds only dirt, instrumental lines unfurl in lyrical longing but halt abruptly with moments of overpressure in the bowing. As late as the piece’s ninth minute, after a cello solo brings the music to peak sensuousness, a viola melody crash-lands in violent scratch tones.

The Soughing Wind, a suite for flute and guitar, finds Liberatore contemplating the transition between late summer and autumn — appropriate for a disc released in August. The first movement drifts by like the hours of a humid afternoon. Flutist Molly Alicia Barth plays its melodies with the breadth of a clarinet and the metallic waver of a saxophone, as well as with more conventional flute tones, but always with rare control and precision. This opening music returns in the final movement, albeit drained of its hothouse plenitude as the hazy harmonics of Dieter Hennings’s initial accompaniment become choked slides across the fingerboard. The magic of A Line Broken, Traced mostly happens in the third movement, when Jan Berry Baker of the Bent Frequency Duo Project plays soprano saxophone tones that seem to emerge from the resonance of percussionist Stuart Gerber’s triangle strikes. The least distinctive composition on the record, it nonetheless highlights the Duo members’ respective strengths.

Had They Remained, the final piece on the album, faintly recalls the music of the young Schoenberg. However, this miniature song cycle also sounds urgently contemporary in both words and music. Performed by soprano Jamie Jordan, percussionist Daniel Druckman, and Liberatore on glass harmonica, the three songs set texts by exiled Iranian poets. Its title comes from Mina Assadi’s “Waking Dreams 3,” and refers to children who have faced displacement and worse. The most affecting piece, Had They Remained, never ceases to surprise and captivate after repeated hearings. Druckman, rolling softly on a tam-tam in the latter half of the definitive second song, sounds like a distant choir, and Jordan soars and floats with gorgeous tone.